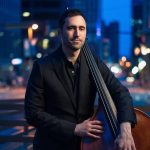 October 11, 2021 · by admin · in Artist Profiles
Known for his wit and versatility, Philadelphia-born bassist Blake Meister has become a widely recognized name in Baltimore’s jazz scene and beyond. Even in the toughest of times, he remains one of the busiest (and most positive) musicians around. Whether attending Terra Cafe’s Monday night jam session or performing on stage at all the local haunts and venues, you can be sure that he is always on the move and at the ready. | Read more>> 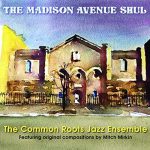 January 5, 2021 · by Liz Fixsen · in CD Reviews
This album, inspired by the old synagogue that was once home to Mishkan Israel congregation and is now occupied by a Seventh-Day Adventist congregation, reflects on “the inevitability of change, evolution, transformation,” as Mirkin puts it. The seven tunes on the album traverse cultures with various grooves and styles that often switch within a tune. | Read more>>