February 13, 2014 · by admin · in Features, Uncategorized
Ver la Luz Mark Osteen was one of ten jazz composers whose original work was performed at the Baltimore Jazz Composers Showcase on Sept. 29, 2013 at Loyola University. Mark said his tune “Ver la Luz” was designed as a conversation between the horns, continuing until they “see the light.” His composition, he explained, was a contrafact; that is, a musical composition consisting of a new melody overlaid on a chord progression borrowed from another tune. | Read more>> 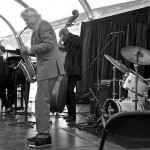