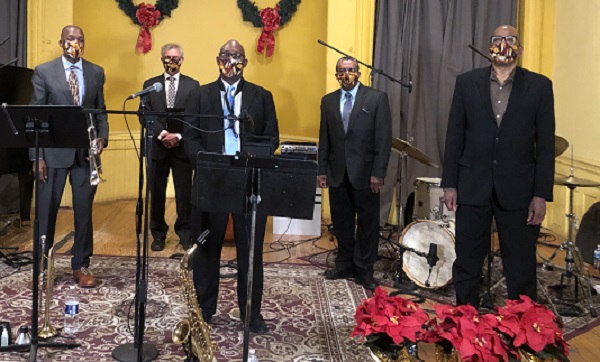 Swing Into Spring! Encore of their last performance on February 27.

Terry Koger, a native of Trenton New Jersey began his musical training at an early age on piano and later on alto saxophone. His first jazz instructor, Thomas Grice, was instrumental in his early training, teaching Terry about improvisation and the art of teaching music.

Terry graduated from Morgan State University majoring in music education. In addition to his love of music and especially Jazz, he developed an interest in black music research, studying the history of black music and the current contributions of black Americans to the vast field of music. He was mentored by significant scholars in the field such as Dr. Samuel A. Floyd, Dr. Eileen Southern, and Dr. Dominique Rene’ de Lerma.

Since that time, Terry has performed musical therapy in the Baltimore Washington Metropolitan area. He has played for thousands of elders for the past 20 years performing room visits and theme music programs at nursing homes and hospitals. In addition to leading his group, “TKQ” (Terry Koger Quartet, Quintet), He has been featured as a sideman with many area musicians.

He has worked with Vattel Cherry Soulststion, The Eubie Blake Big Band, The Deepwater Jazz Ensemble, and the Benny Russell Big Band. Some of the venues Terry has played include the Anacostia Arts Center, An Die Musik, Alice’s Jazz and Cultural Center, The Arts Barn, Caton Castle, The Eubie Blake Center, Germano’s and Keystone Korner Baltimore.

Streaming cost is $10
Donations are welcomed.
The link will be revealed to you 15 minutes before the show
and will remain active through May 13