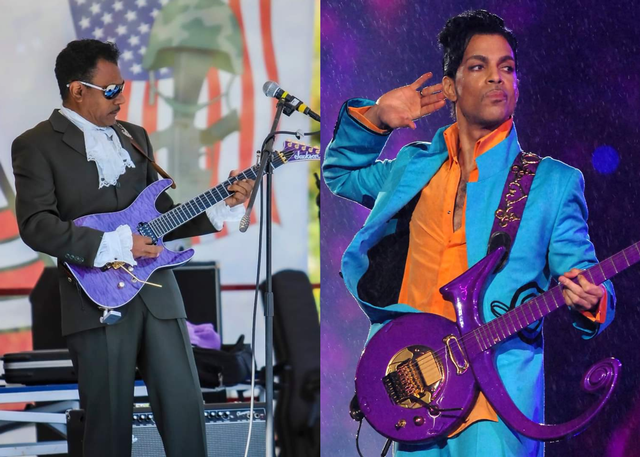 1st Time Ever the INSATIABLE Salute to the Music of PRINCE featuring Cymone Lovett as PRINCE & the Dream Band Concert Performance is coming to Keystone Korner Baltimore! Insatiable Tribute to Prince & the Music of Morris Day & The Time

Prince Rogers Nelson, better known as just Prince, was an American singer, songwriter, and multi-instrumentalist widely regarded as the pioneer of Minneapolis sound. Famous for his flamboyance, powerful voice, and eclectic behavior, he boasted of a career that spanned four long decades, a rarity in the music world where success is fickle. With worldwide sales of 100 million records, he is counted amongst the best-selling artists of all time. The son of a pianist and a jazz singer, Prince inherited his musical talents from his parents who encouraged him from a young age to pursue music as a career. He achieved worldwide fame in the 1980s with ‘1999’ and ‘Purple Rain,’ the latter album also serving as the soundtrack for the popular film of the same name. Prince will be remembered as a musician and artist who inspired millions through his music, and set an inspirational platform which others still abide by.

Cymone Lovett and his Dream Band are excited for this performance! He graduated from Suitland High School and was interested in music. In high school, the first instrument he ever played was taught by his father June Turner, bass guitar. Cymone is a self-taught multi-insgtrumentalist, playing piano, guitar, bass, and drums. He has performed with many bands in the DMV area. He decided to create his own tribute band to Prince during the pandemic. This dream band has been together for two years, with all the arrangements done by Cymone. Cymone is a profound songwriter, guitarist and vocalist that is insatiable in his musical salute to the music of PRINCE, MORRIS DAY & THE TIME as well as his own music!

Calling All Prince and Morris Day & The Time Fans to come and celebrate the PRINCE FOREVER TRIBUTE SHOW Celebrating the New Year 2023!
Nothing Can Compare to PRINCE Timeless MUSIC!
The Immersive Experience!
Inspiring, Unprecedented tribute to Prince’s music style, and cultural legacy.

TARSHA FITZGERALD PRODUCTIONS, Executive Producer is very profound in creating Magical Musical Concerts featuring Extraordinary Music, Great Vibes, and Memorable Experiences all around the Mid-Atlantic States that will be an Unforgettable Night to Remember!