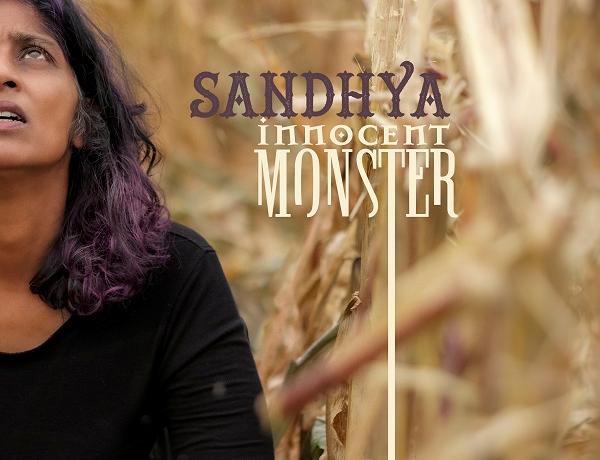 Sandhya, charismatic pianist-singer-composer and freewheeling interpreter of rock, pop, and jazz classics, in a live and streaming show. A multi-discipline creative force in Baltimore-Washington since the 90s, Sandy Asirvatham, now going by her original Indian first name, is poised to break nationally with her latest recording project, the jazzy art-rock album INNOCENT MONSTER.

Kenneth Silber at SPLICE TODAY calls the record “an absorbing mix of lyricism and cynicism, displaying unflappable resilience amid somber contemplation…laced with the caustic humor…now leavened with experience and sliced into tuneful packets.”

In a primarily solo piano/voice show featuring songs from the album and an eclectic selection of cover and older originals, Sandhya will be joined by two of the many musicians who participated in INNOCENT MONSTER: Mark St. Pierre on percussion and Piper Greenbaum on French horn and vocals. This will be Sandhya’s first public show in support of the album, which is already garnering excellent press notices and radio play around the country. As the pandemic continues to abate, she hopes to bring her full rock band onto stages around the East and West coasts beginning in mid-2022.

A wannabe novelist in her youth, Sandhya’s earliest successes came as an award-winning columnist for Baltimore CityPaper, and later as an Emmy-winning PSA producer/writer. She got serious about music when trying to escape personal crises through obsessive piano practice. (It worked.) Her first album of mostly originals, MEMOIR (2007) was chosen by W. Royal Stokes as a Best Jazz Debut of the year in The Village Voice. She was the visionary behind MOBTOWN MOON (2013), a massive Pink Floyd homage for which she gathered 40+ collaborators from the mid-Atlantic’s vibrant, varied music scenes.

Limited in-person seats: $20
Proof of COVID-19 vaccination required at door.
In-person attendees receive a link to the recorded performance to watch for one week.

Streaming cost is $15
The link will be revealed to live stream participants 15 minutes before the show
and will remain active thru Dec. 14