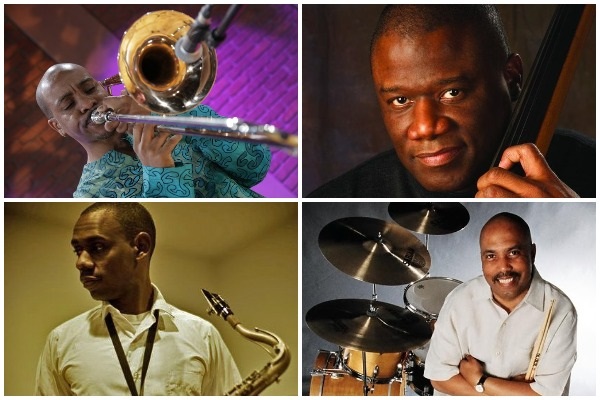 Recording artist Reginald Cyntje (born in Roseau Dominica, raised on St. He leads his own groups and works as a sideman in numerous bands. He is also the founder/owner of Jegna School of Music, a school that provides music lessons, workshops and mentoring concerts for intergenerational students; the founder and creative director of Cyntje Music, a one-stop music boutique that includes booking, curating and assisting artists; and the author of Stepping Stones: 15 studies in improvisation. Cyntje is also the Director of Jazz Studies at Duke Ellington School of the Arts and professor of music at Montgomery College. He has toured the US, Europe, South America, and the Caribbean. Healing is his latest album combining artistic expression with an awareness of the environment.

Born in Philadelphia and raised in Baltimore, Lenny Robinson attended Morgan State University and the Peabody Conservatory of Music. Whilel in college, he did a European tour with a theatrical jazz ensemble performing at several festivals including Montreux, North Sea and others. After college, he performed with several R&B groups including Jean Carne, Roy Ayers, The O’Jays and others. He then joined the 26th Army Band in Brooklyn and became a part of the New York jazz community. He formed a band that included such artists as Onaje Alan Gumbs, John Purcell, Anthony Cox and the late Kenny Kirkland. After leaving the Army, Lenny moved to the Washington, DC, area where he quickly became one of the most in-demand drummers in town.

Saxophonist and composer Brian Settles has established himself as a rising force with a long-term artistic vision. Settles blends the outwardly engaging with the deeply personal, reconciling his intimate command of the jazz lineage with a commitment to his own experimental voice. He performs regularly with some of modern jazz’s leading groups. Settles’ two albums as a leader feature entirely original music. He attended the Duke Ellington School of the Arts, studying with renowned saxophonist and educator Davey Yarboroughand began a ten-year mentorship with tenor saxophone legend Stanley Turrentine. He went on to attend the New School for Jazz & Contemporary Music, where he was mentored by bass legend Reggie Workman and saxophonist Arnie Lawrence, the school’s founder. Settles earned a master’s degree in music from Howard University, where he studied with saxophone great Charlie Young. In 2015 he was listed as a rising star on tenor saxophone, in Downbeat magazine’s critics poll, and he earned an artist fellowship from the DC Commission on the Arts and Humanities.

Streaming cost is $10
Donations are welcomed.
The link will be revealed to you 15 minutes before the show
and will remain active through April 16