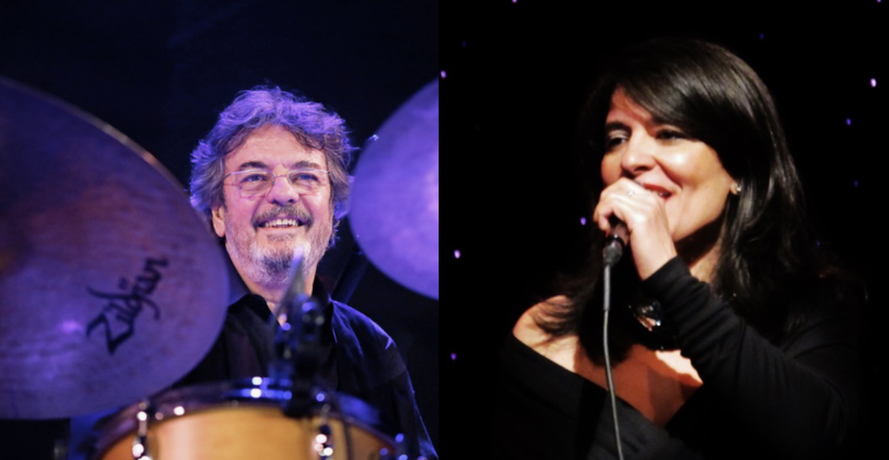 Born in Rio de Janeiro, Duduka Da Fonseca is a 4-time GRAMMY® Award Nominee Drummer. He has appeared on over 250 albums alongside American Jazz icons as well as Brazilian Jazz Icons, including 25 albums as a leader/co-leader, making him one of the most recorded Brazilian drummers in this idiom. In 2002 Duduka’s first solo album, Samba Jazz Fantasia, was the first “Samba Jazz” instrumental album ever to be nominated for the American Grammy® Award. He is one of the very few Brazilians and the only Brazilian drummer thus far to be nominated for this prestigious Award with his own solo album. He has recorded and tour with Antonio Carlos Jobim, Gerry Mulligan, Astrud Gilberto, Phil Woods, Kenny Barron, Lee Konitz, Eddie Gomez, Herbie Mann, Joe Henderson, Claudio Roditi, Rufus Reid, Paquito D’Rivera, Slide Hampton, Wynton Marsalis, Nancy Wilson, John Pizzarelli, John Scofield,Tom Harrell, Joe Lovano, Renee Rosnes, Bill Charlap, Milton Nascimento, Dori Caymmi, Oscar Castro Neves, Larry Goldings, Bob Mintzer, Randy Brecker and many fantastic others.

“The universal appeal of Brazilian jazz is how measured, melodic emotion is energized from within by subtle, invincible rhythm. Da Fonseca may be the best in the world at motivating and sustaining that special vital pulse.” Thomas Conrad, JazzTimes.

Maucha Adnet: Born in Rio de Janeiro, Brazil, Maucha Adnet started singing professionally at age 15 as part of vocal group Céu da Boca, from 1978 to 1984. With Céu da Boca, Maucha toured around Brazil and recorded two albums released by Polygram. From 1984 until 1994, Maucha performed all over the world with legendary composer Antonio Carlos Jobim and that’s how she ended up in New York, where she has been living since 1987. The recordings Maucha did with Jobim and his Banda Nova are: Passarim” (Polygram, Verve, 1987), “Antonio Brasileiro” Grammy Winner (Sony Music, 1995), “Tom Jobim Inédito”(BMG-Ariola, 1995) and “Rio Revisited”(Polygram, Verve, 1987). Since living in New York, Maucha has been working with her own band and participating in many recordings and shows with artists like: Randy Brecker, Slide Hampton, Claudio Roditi, Duduka Da Fonseca, Trio da Paz, Mario Adnet, Winton Marsalis, Bucky Pitzarelli and many others.

“Maucha and I have travelled the world with the Banda Nova since 1984. She is a marvellous singer. Her voice is deep, rich, mysterious. It makes me long for the Brazilian forest. Maucha is intelligent and comes from a very musical family. She is a good girl, wonderful woman, a great artist.” — Kiss from your fan, Antonio Carlos Jobim

“Duduka Da Fonseca had the flowing beat doing his bidding, making one dance while sitting down. A master of “Brasilient” rhythms, he is equally capable of grooving a jazz 4/4 with his great, loosey-goosey swing” –Ira Gitler, American Jazz Historian and Journalist