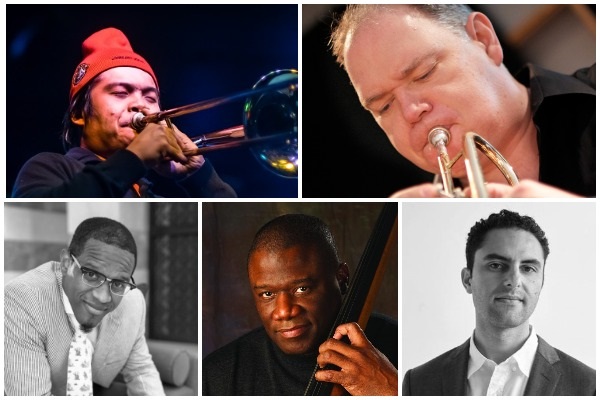 Accomplished musician Christian Hizon is an in-demand trombonist, educator and session player in the DC/MD/VA music scene. A graduate of the Peabody Conservatory with a Bass Trombone Performance degree, he has studied and performed with numerous first-rate musicians. While adept at many styles including classical, funk and hip-hop, Hizon has focused toward jazz leading groups or performing as a sideman. Hizon continues to develop his sound, blending the traditional jazz language with a modern compositional style.

Dr. Alexander Norris is a veteran Jazz trumpeter on the New York scene. He is also a seasoned educator, composer, and arranger. Norris performs all over the world with his own jazz group and many other jazz and Latin jazz artists. From 2010-2018 Alex enjoyed a great tenure on the Peabody Conservatory Jazz Faculty. He is currently a member of the Jazz Studies Faculty at the University of Arkansas at Monticello and the City College of New York. Norris has recorded a new project for the Steeplechase label set for a 2021 release.

Quincy Phillips has spent more than 30 years cultivating his passion as a musician from childhood through his adult years. He performed for President and Barack Obama and First Lady Michelle Obama for the “Smithsonian Salutes Ray Charles: In Performance at the White House”. Phillips won IAJE’s1st place for Jazz Composition for his arrangement of “Alone Together,” and he is a member of the Grammy award-winning Christian McBride Big Band.

Grammy-nominated pianist and composer Alex Brown is at the forefront of a new generation of artists. He has been a member of Paquito D’Rivera’s ensemble since 2007, performing on and contributing arrangements to their Latin Grammy award-winning album Jazz Meets the Classics. Brown collaborates frequently with vibraphonist Warren Wolf, steel pan virtuoso Victor Provost and the classical wind quintet Imani Winds. Brown earned his Bachelor of Music degree at New England Conservatory and his Master of Music degree in composition at the University of Miami’s Frost School of Music. In 2018-19, he served as a Visiting Artist in Jazz Studies at the Peabody Institute. He is a YAMAHA artist and resides in New York City.

Obasi Akoto is well known for his work with Elvin Jones Jazz Machine and Baltimore’s own Cyrus Chestnut. A veteran bassist he has a long and distinguished career performing and recording with some of the most important jazz musicians in the world. He has appeared on many recordings as a sideman and on two as a leader and composer. After 15 years at the helm of the University of Manitoba Jazz Studies program, Obasi Akoto is now retired and living in Baltimore, happily devoting himself to being a full-time performer, composer and recording artist.

Streaming cost is $10
Donations are welcomed.
The link will be revealed to you 15 minutes before the show
and will remain active through May 5.