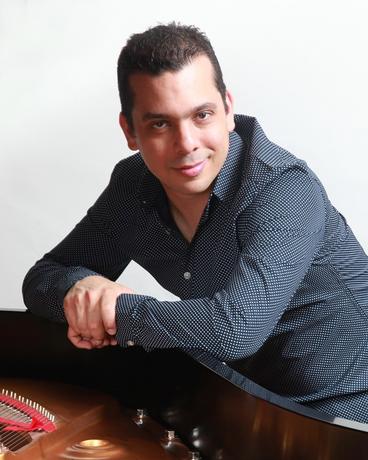 César Orozco is a Cuban-born pianist, violinist, composer, arranger, producer, and educator based in the NYC Tri-State area. In 1997, Orozco traveled from Cuba to Venezuela, where he spent 14 years and developed an important and prolific career. In 2012, Orozco moved to the United States and enrolled with a full-tuition Assistantship to The Peabody Institute of John Hopkins University in Baltimore, where he earned a Graduate Performance Diploma (GPD) in Jazz Piano. He also holds a degree in Violin Performance and Ensemble Conducting from the National School of Arts in Havana, Cuba. Since relocating to New York in 2015, Mr. Orozco has become an in-demand pianist. Some of the artists he has worked with include Paquito D’Rivera, Pedrito Martinez, Gary Thomas, Alex Norris, Troy Roberts, Paul Bollenback, Itai Kriss & Telavana, Albita Rodriguez, Guaco, Gilberto Santa Rosa, Luis Enrique, Huascar Barradas, Simon Diaz, and Giovanni Hidalgo just to name a few.

Orozco has developed an innovative approach to a fusion of Venezuelan and Cuban traditional music with Jazz along with his project Kamarata Jazz. He has participated in more than 70 albums and his recordings as a leader include “Son con Pajarillo” (2007), “Ébano y Marfil” (2008), “Orozcojam” (Guataca, 2010, awarded for Best vocal/Instrumental album at Cubadisco 2012), “No Limits for Tumbao” (Alfi Records, 2015) and the latest one “Stringwise”, a duo with the outstanding Venezuelan cuatro player Jorge Glem.

As an arranger and/or composer, Mr. Orozco has been commissioned by The Baltimore School for The Arts, the Chamber String Orchestra from the MCYO at Strathmore in Maryland, The Netherlands Blazers Ensemble (NBE), Raíces Jazz Orchestra from Miami FL, the Venezuela Symphony Orchestra, and the Frankfurt Radio Big Band among others. In 2019, he was nominated for “Best Arrangement” at the 20th Latin Grammy awards for his piece “Imprevisto”, performed and recorded by Pablo Gil & The Raices Jazz Orchestra featuring the great percussionist Tony Succar. Orozco is a Downbeat Magazine Student Award 2014 recipient and is a full-time faculty at Corlears School in Manhattan.

Streaming cost is $10
Donations are welcomed.
The link will be revealed to you 15 minutes before the show
and will remain active through April 15