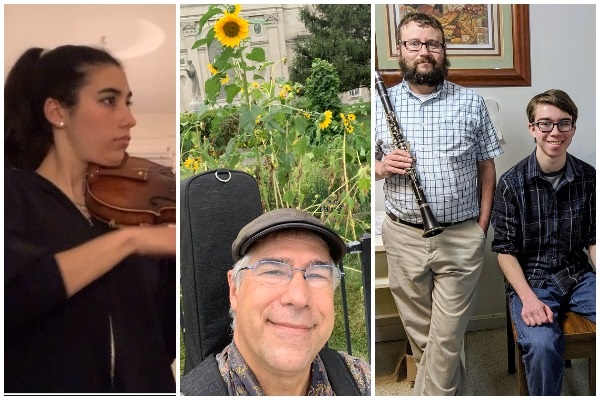 Seth Kibel is one of the Mid-Atlantic’s premier woodwind specialists, working with some of the best bands in klezmer, jazz, swing, and more. Wowing audiences on clarinet, saxophone, and flute, Seth has made a name for himself in the Washington/Baltimore region, and beyond. He is the featured performer with The Kleztet, Bay Jazz Project, Music Pilgrim Trio, The Natty Beaux, and more. Winner of 28 Washington Area Music Awards (Wammies), including “Best World Music Instrumentalist” (2003-11) and “Best Jazz Instrumentalist” (2005, 2007-8, 2011-14). His most recent recording, “When You’re Smiling,” was released in 2018 on the Azalea City Recordings record label. His song “New Waltz” was the Grand Prize winner of 2016 Mid-Atlantic Song Contest (MASC), sponsored by the Songwriters’ Association of Washington (SAW).

Michael Raitzyk is a longtime Baltimore guitarist and has been involved with many cool projects. One of those projects has been an immersion into the world of Klezmer music. As co-leader of Charm City Klezmer, Raitzyk arranged, composed, and led the ensemble for 15 years, including a monthly gig at the now defunct NYC jazz club Tonic. CCK was recorded on a compilation CD entitled “Live At The Tonic” on John Zorn’s Tzadik label.

Rebekah Geller has been playing the violin for 5/6th’s of her life. She started with a 1/10th size violin at age three, and worked her way up to a full size one at her current age of seventeen. She is a member of the Baltimore Symphony Youth Orchestra, The Park School Jazz Ensemble and co-leader of Seeds of Joy, a duo project with her dad.

Will Kibel is currently in the 11th grade at the McDonogh School. He is a multi-instrumental who, in addition to performing with his father, makes electronic music under the name “Audix.”

Limited in-person seats: $20 /$10 full-time students with valid ID
Proof of COVID-19 vaccination required at door.
In-person attendees receive a link to the recorded performance to watch for one week.

Streaming cost is $10
The link will be revealed to live stream participants 15 minutes before the show
and will remain active thru Dec. 7