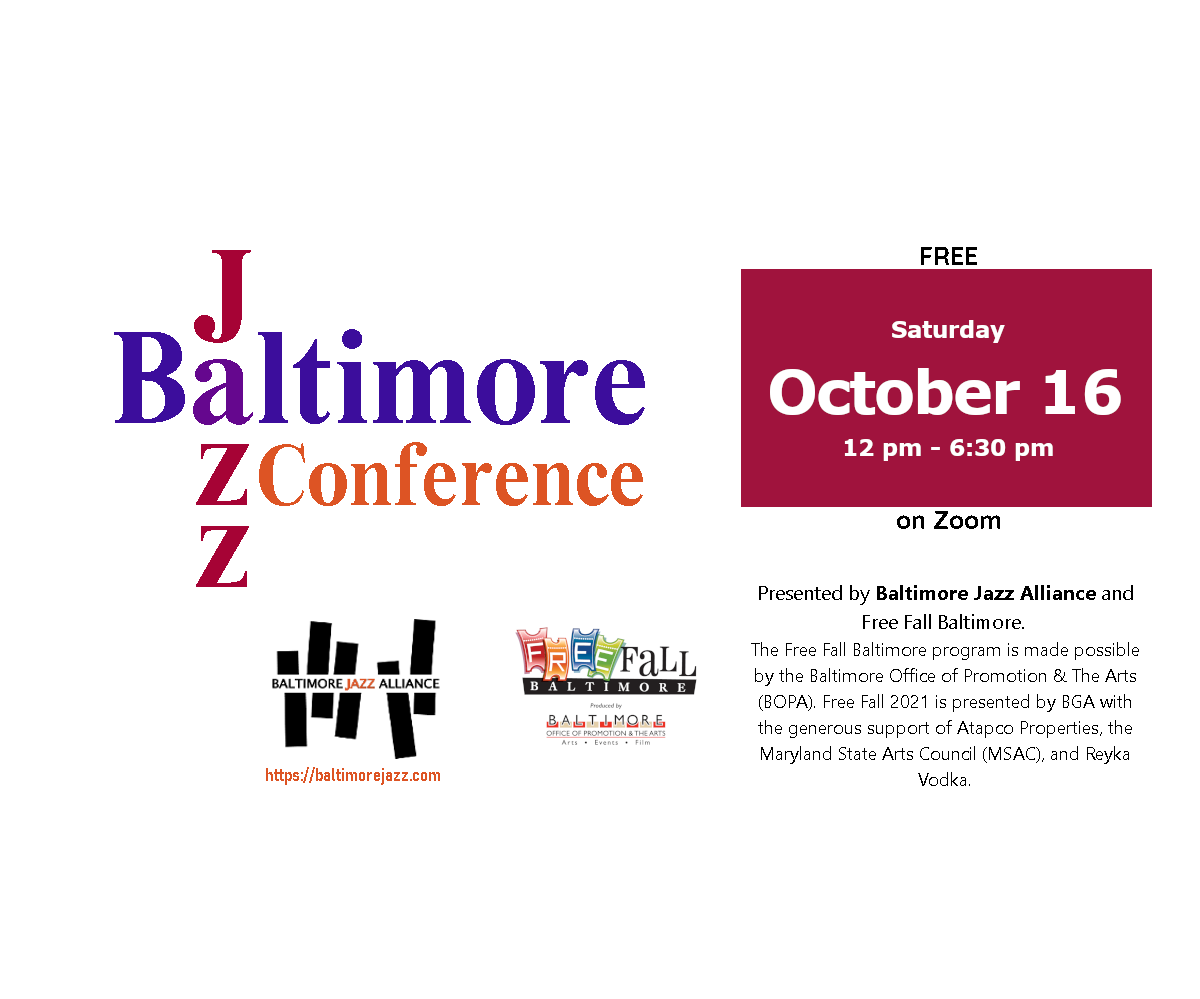 Register here! Register today – the event is free, but you must register to receive access – zoom links will be provided after registration.

Below is the schedule – and scroll down for bios on some of the presenters.

Of course, we realize that it can be hard to choose between sessions. We apologize, but there’s a lot we want to offer, and not a lot of time to do it in. Feel free to hop between sessions, and note that all presentations will be recorded for later viewing in case you miss something you wanted to see/hear.

This free program is brought to you by Baltimore Jazz Alliance with support from the Baltimore Office of Promotion and the Arts as part of Free Fall Baltimore.

The Free Fall Baltimore program is made possible by the Baltimore Office of Promotion & The Arts (BOPA). Free Fall 2021 is presented by BGE with the generous support of Atapco Properties, the Maryland State Arts Council (MSAC), and Reyka Vodka.

Jocquelyn is a filmmaker and arts administrator with over twenty years of experience working with students, arts educators, artists, and communities advancing arts education initiatives and programs for underrepresented communities. She currently serves as the Director of the Arts Council for Baltimore City where her primary focus is to provide resources and financial support to creatives and arts/culture organizations throughout the city.

Aaron Hill is a Baltimore, MD-based musician mentored by Dr. Maurice Johnson–boasts over 30 million streams of his music and 1 million downloads worldwide. Hill founded the group Fruition Experience–a satiating blend of NeoSoul, Jazz, & Hip-Hop–which has been called ‘Cosmic Soul; He also is the CEO of Fruition Music a performance track company. Most recently he has been creating music and featured with The Aaron Hill Trio–a group reminiscent of Keith Jarrett’s standard trio.

Aaron’s current project, Street Serenades, was birthed out of his response to the COVID-19 pandemic and his deep desire to serve the community. It has received rave reviews by both his fans and the press.

“Warren Wolf is a multi-instrumentalist from Baltimore, Maryland. From the age of three, Warren was trained on the vibraphone, drums, and piano—under the guidance of his father Warren Wolf Sr. Warren attended Peabody Preparatory—studying classical music with Leo LePage. Then with John Locke at Baltimore School for the Arts for his high school years. Warren also attended Berklee College of Music in Boston, Massachusetts.

During his time at Berklee, Warren studied with Caribbean jazz vibraphonist Dave Samuels. After graduating from Berklee in May of 2001, Warren became an active musician on the Boston scene—also teaching at Berklee College of Music. Warren, today, living in Baltimore, is an International touring musician and music professor both at Peabody Conservatory in Baltimore and at San Francisco Conservatory. Warren has performed throughout the United States of America, South America, Canada, Italy, Spain, Amsterdam, Rotterdam, Scotland, London, Greece, Singapore, Thailand, Jarkata, Bangkok, Tokyo, Paris, Moscow and many other countries.

Bertrand Überall has done extensive research on the music of many jazz composers such as Lee Morgan, Herbie Nichols, Tadd Dameron, Wayne Shorter, Cal Massey and Duke Pearson and uncovered unrecorded music at the Library of Congress. Bertrand has also been conducting research on the Left Bank Jazz Society, both the Baltimore and DC chapters. Bertrand is a volunteer coordinator with Jazz concert series at the Smithsonian, the DC Public Library and a Unitarian Church in Silver Spring.

Kenny Dalsheimer is an award-winning filmmaker, producer, and media educator based in Durham, North Carolina. He founded The Groove Productions in 1996 when he began producing documentaries and community video. His films, Go Fast, Turn Left: Voices from Orange Country Speedway (1997) and Shine On: Richard Trice and the Bull City Blues (2000), screened across North Carolina as part of the NC Humanities Council’s Road Scholars program. He co-directed and shot Bending Space: Georges Rousse and the Durham Project (2007) which screened at festivals around the world and aired across the southeast on PBS. His disability rights film, A New Kind of Listening (2009), received national recognition in 2010 from TASH as recipient of the Positive Images in Media Award. A Weaverly Path: The Tapestry Life of Silvia Heyden (2011) and Bending Sticks: The Sculpture of Patrick Dougherty (2012), offer immersive portraits of internationally recognized NC artists. Peace in Our Pockets (2016) celebrates the peacebuilding work of Kenyan activists in the lead up to Kenya’s 2013 elections. His most recent film, You Gave Me a Song (2019), celebrates the life and musical journey of old-time music legend Alice Gerrard. Kenny received his M.A. in Anthropology from Duke University in 1985 and taught at Carolina Friends School between 1986–1996.

Ty Citerman is a Brooklyn, NY-based guitarist, composer and bandleader who explores music across the spectrum of jazz, rock and contemporary classical. His most recent album “Bop Kabbalah+Voices: When You Speak of Times to Come (Ven Du Redst Fun Naye Tsaytn)” was released on Infrequent Seams in December 2020 and features a dynamic trio with vocalist Sara Serpa and vocalist/pianist Judith Berkson that critic Eyal Hareuveni called ““Inspiring and moving…beautifully arranged and delivered” (Salt Peanuts).

Music and spirituality have always been fully intertwined in the artistic vision of trumpeter,  bandleader, composer, educator and activist Sean Jones. Singing and performing as a child with  the church choir in his hometown of Warren, Ohio, Sean switched from the drums to the  trumpet at the age of 10.

Sean is a musical chameleon and is comfortable in any musical setting no matter what the role  or the genre. He is equally adept in being a member of an ensemble as he is at being a  bandleader. Sean turned a 6-month stint with the Jazz at Lincoln Center Orchestra into an offer  from Wynton Marsalis for a permanent position as lead trumpeter, a post he held from 2004  until 2010. In 2015 Jones was tapped to become a member of the SFJAZZ Collective. During this  time, Sean has managed to keep a core group of talented musicians together under his  leadership forming the foundation for his groups that have produced and released eight recordings on the Mack Avenue Records, the latest is his 2017 release Sean Jones: Live from the  Jazz Bistro.

Sean has been prominently featured with a number of artists, recording and/or performing  with many major figures in jazz, including Illinois Jacquet, Jimmy Heath, Frank Foster, Nancy  Wilson, Dianne Reeves, Gerald Wilson and Marcus Miller. Sean was selected by Miller, Herbie  Hancock and Wayne Shorter for their Tribute to Miles tour in 2011.

He has also performed with the Cleveland, Pittsburgh and Youngstown Symphony Orchestras as  well as Soulful Symphony in Baltimore and in a chamber group at the Salt Bay Chamber Festival.

Sean is also an internationally recognized educator. He was recently named the Richard and  Elizabeth Case Chair of Jazz at John Hopkins University’s Peabody Institute in Baltimore. Before  coming to Peabody, Sean served as the Chair of the Brass Department at the Berklee College of  Music in Boston.