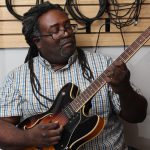 March 19, 2021 · by Mitch Mirkin · in Memorial
Yawn Jones, of blessed memory, passed away on Feb. 22, 2021, at age 48. The memoriam below is written by his student and musical collaborator Mitch Mirkin, a member of the BJA editorial committee. I first met Yawn Jones in 2015 at The Music Workshop in Baltimore. | Read more>> 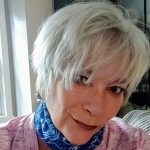 January 16, 2021 · by Mitch Mirkin · in Member Profile
Would you travel hours by train or bus for a musician friend’s gig? Sue Carlin would, in a heartbeat.   Prior to the pandemic, the Inner Harbor resident was a familiar face at local jazz venues, and often traveled to other cities—like Philadelphia or New York—to show her love for Baltimore-based performers. | Read more>> 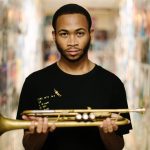 April 1, 2019 · by Mitch Mirkin · in Artist Profiles
I first encountered trumpeter Brandon Woody, now aged 20, last August, when he led an open-mic jam session at the Motor House on North Avenue with his group, Upendo (Swahili for “love”). I then caught one of his monthly gigs at An die Musik on North Charles. | Read more>>

Big Band of the Week – The Shades of Blue Orchestra

August 26, 2018 · by Mitch Mirkin · in Big Band of the Week
One of the busier big bands in Baltimore is The Shades of Blue Orchestra, founded in 1976. The smooth, polished, swinging sounds of this ensemble can be heard via a wide array of audio tracks on its website. There are about two dozen longer clips on the band’s Jukebox webpage, each 90 seconds, and each presenting a flowing montage of snippets from the whole tune. | Read more>>

August 5, 2018 · by Mitch Mirkin · in Big Band of the Week
The Reisterstown Jazz Ensemble bills itself as a “band for all occasions”: weddings, stage concerts, dances, jazz festivals, rock concerts — even funerals. You name it. Band director, trumpeter, and vocalist Scott Cater, who founded the band in 1992 along with lead trumpeter Scott Bowers, his former bandmate at Franklin High School, says he never wanted the band to get pigeonholed into one style of music. | Read more>>