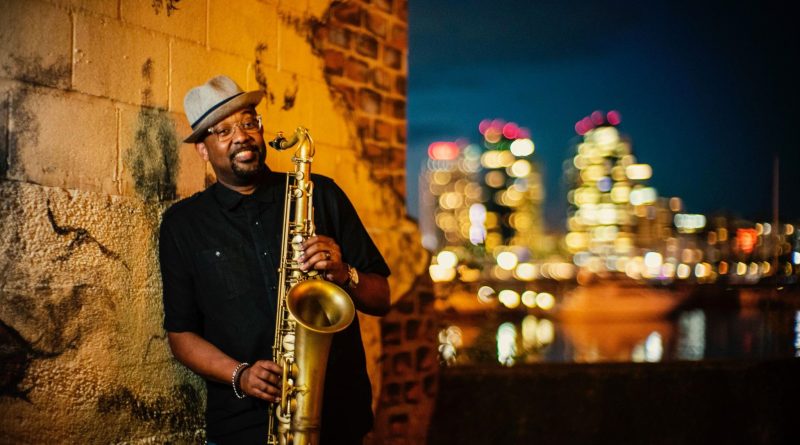 Lionel Lyles was born in Boulder, Colorado but his family moved to Baltimore when he was two years old. His mother worked for 35 years at Coppin State doing accounting in the Management Science department, while his father worked at Morgan State in the planning department.

Besides Lyles’s mother, who recorded a Gospel album with her church choir, Lyles was the first one in his family who took music seriously. His main entree to music was at Wyman’s Elementary School, where he took a class called Exploratory Music, which was an introduction to instrumental music. Once in 5th grade, he was able to join band. The only instruments offered were clarinet, violin, and trumpet.  His first preference was clarinet–but his mother nixed that choice.  However, she was OK with trombone or saxophone, so he opted for saxophone. Has never regretted that choice.

From high school, he went on to major in saxophone at Morgan State. It was not through his father that Lyles ended up at Morgan; rather, it was because of a band showcase for Baltimore County high schools, held at Towson University. Lyles, then a student at Randallstown High School, played in the showcase –where he heard the Morgan State Band perform. He was captivated.

While at Morgan, besides playing in the jazz band and woodwinds ensemble, he played trombone in marching band and concert band; even after Morgan, he continued playing trombone from time to time.  But Lyles recalls how one day, the Morgan band director Melvin Miles (who is retired from nearly 50 years teaching at Morgan) sat him down and said, “You can’t be married to two women; you gotta choose – sax or trombone.” “It was a no-brainer for me,” says Lyles, and he chose saxophone – although he kept playing trombone for some years before finally deciding to focus mainly on saxophone. (Besides tenor, he plays alto, soprano, and even baritone sax.)

Asked how playing trombone has affected his saxophone playing, Lyles explains that the   trombone opened up the world for him in terms of harmony, tone, and register– tenor sax and trombone are in the same register, and when both are playing in an ensemble, they have to learn how to “co-exist” with each other in the same space.

He graduated from Morgan in 2002 with a degree in music education; during that time, he was out performing with the group that became the Lionel Lyles Quintet (LLQ). After leaving Morgan State, Lyles in taught Baltimore City Schools for a year, at private school for a year, and two more years in Prince George’s County schools—all the while, still out performing. He’d be getting up early in the morning to teach, and then often go out and do a gig until late at night, “all over the place.” Around 2005-06, he decided to devote himself full-time to performing.  This was a leap of faith, without the prospect of a steady income. Becoming a full-time musician meant continual hustling. In 2006 his quintet recorded its first studio project entitled “The Lionel Lyles Quintet: The September Sessions.” It was dedicated to the city of Baltimore.

During this time, Lyles began to realize that he needed to further his formal jazz education, so in 2008, he enrolled at North Carolina Central University (NCCU), in master’s program in music and jazz studies/saxophone performance.  While there, he studied with several iconic jazz figures, including Joey Calderazzo, Antonio Parker, Dalfeyo Marsalis, Jimmy Heath, Roy Hargrove, Vincent Gardner, Wynton Marsalis, and Branford Marsalis.

When he first started studying with Branford Marsalis, he tried hard not to be starstruck. Lyles described the first encounter: “When Branford walked in the room, he’s like ‘Hey, what’s up?’ and I’m like, ‘oh, wow!’” While Marsalis could be laid back and friendly, he was also a very tough teacher. Lyles recalls one particularly memorable experience in a lesson with Marsalis. Because he had taken six years off between leaving Morgan and starting at N.C. Central, he wasn’t quite yet in the swing of things. Marsalis gave him an exercise to do. And when it turned out that Lyles had neglected to do it, Marsalis “lit him up” –subjecting him to a verbal flagellation, saying , “You’re not gonna waste my time, man–Go ‘shed!”  But immediately after that tongue-lashing, Marsalis did an immediate pivot to become the friendly, encouraging teacher again.

Lyles talked about the first tune on his 2006 album, “The Night Life,” which was inspired by the beauty of the nighttime cityscape in downtown Baltimore. The melody just came to him, he says, and the next day, he started writing it out. The personnel includes Brandon Moultrie (alto); Freddie Dunn (trumpet); Todd Simon (piano); Percy White (bass), and Theus Jones (drums). Lyles lived in Miami a while after doing the album, doing some cruise ship work. Returning to Baltimore in 2015 , he “attacked” D.C. and was there “every day.” He says he was “on fire, musically,” and wanted nothing more than just to be playing.

In 2014 The band was able to finally record its long-awaited sophomore studio project entitled, The Lionel Lyles Quintet: At The Precipice. A third album was released in 2019,  The Lionel Lyles Quintet: Simplistically Complex”.  The albums are available at www.LLQmusic.com. In 2015, Lyles won several awards given by the Washington City Paper: in 2015, a JAZZY award for best jazz tenor; in 2016, best New Jazz Tenor player, and Best Performing Artist across all genres.

A biographical sketch for a 2021 concert at An die Musik reads: “Lionel has always believed that the personal journey for knowledge is an important one, in and out of music; more so, in every walk of life. It is by the acquisition of information that true power and love is achieved. The power of music lies within humanity as a whole and is one of the most beautiful ways to bring us all together—through the music.” He ends with an acronym: P.E.A.C.E. – Positive Energy Activates Constant Elevation.” Lyles says that when he heard that acronym, it “changed his life” and he tries to live by it every day. Positive energy begins within a person – and is perhaps stronger than we recognize.

This article is written by Liz Fixsen and based on a live interview with Lionel Lyles conducted by Aaron Hill on the Clubhouse app on Sept. 30, 2022. Liz Fixsen is a member of the board of the Baltimore Jazz Alliance, and she edits and writes for the newsletter. Aaron Hill is a jazz pianist well-known in the Baltimore jazz community.