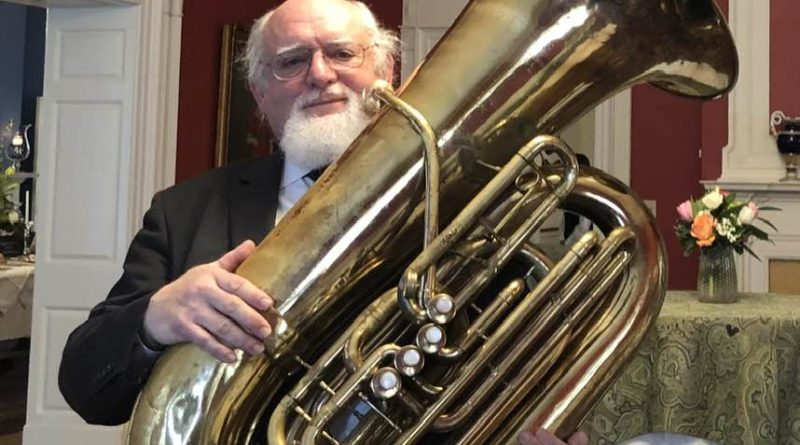 The musical community in Baltimore and around the world mourn the loss of tubist Ed Goldstein on January 6, 2023, long a member of the Peabody Ragtime Ensemble. While there are others who will tell the full story of his life, I appreciate the opportunity to reflect on our friendship.

My first conversation with Ed Goldstein was over the phone. I had just moved to town at the turn of the century and was calling people on the “Leader’s List” obtained from the Baltimore Musicians Union. “Do you play piccolo? Do you have a piccolo?” he asked. “Yes,” I answered, almost completely honestly.

That conversation set me on a musical adventure lasting over twenty years.  Ed welcomed me into the Peabody Ragtime Ensemble where he and the many musicians in his orbit taught me how to play as the motto went, “Ragtime, Dixieland, and All That Jazz.” As someone who fancies himself a modern player, I found it a humbling experience to learn that there was an entire repertoire of music I couldn’t really hang with. Luckily, the folks in the front line let me tag along.

The group began when he and other original members were students at the Peabody Conservatory of Music in the early 1970s, and it continued into the present day with their blessing. Indeed, Ed was the first awardee of the Peabody Alumni Award Recognizing Outstanding Contributions to Music in Maryland.

Despite its name, it is a “little big band,” usually consisting of two reeds, two brass, piano, tuba, and drums. Over the years, there have been many incarnations of the band, with members coming and going. This group has performed far and wide, even in the Soviet Union in the 1980s. In my time with the group, we played countless school concerts, which would always culminate with a New Orleans style version of the “Stars and Stripes Forever” (in the orchestral key!) with the American flag getting pulled out of his tuba. Over the years, we played everywhere — places of worship, concert halls, outdoor festivals, indoor festivals, the Preakness, parades, and weddings. We played one wedding where the bride had heard us in elementary school and decided, “When I grow up and get married, I want the Peabody Ragtime Ensemble to play my wedding!”

Ed would lead the band, call the tunes, play the bass parts on tuba, and play solos. He was an incredibly accomplished tubist. His solos demonstrated his personality, filled with dry wit, references to classical pieces, and making everyone else feel good. One of my favorite things he would do at a reception would be to musically quote, “I Won’t Dance, Don’t Ask Me,” while watching a hapless, uncoordinated attendee on the dance floor. He had a mischievous streak, too. I can remember struggling through “Smoke Gets In Your Eyes” when he and the pianist conspired to re-harmonize the last two bars of the bridge. I stepped right in it, as they say, and turned around to see him cracking up behind his tuba. We would return the favor, though. The late Joe Rinaldi liked to wait until Ed put his tuba down to start counting off a tune.

Ed was always generous and thoughtful of his musicians. He was proud to say that we had acquired a reputation amongst caterers as “the band that eats.” At his funeral, I was struck not only by how many musicians were in attendance, but by how many different kinds of musicians were there. At the ceremony, his friend and collaborator Buddy Wachter called him a “catalyst” and a “thread connecting our tapestry.” Ed was a longtime presence on WBJC’s Face The Music, compiler and editor of the Tuba Source Book, director of the Baltimore Jazz Orchestra, and a contractor for numerous local theaters, venues, and TV and film productions. He brought Tuba Christmas to Baltimore. He won a Lifetime Achievement Award from the Baltimore Musicians Union for contributions to our cultural life and support of musicians.

He was generous and loving to everyone he met, a loving husband, father, companion, and friend. I am grateful for all of the adventures we had together, and we are all enriched by his too brief time with us.

A final memory. The group is performing the traditional hymn, “Just A Closer Walk With Thee.” Ed plays the final phrase alone on the tuba, finishing with a cadenza into the deepest register of the instrument, and then deeper than that. On the “amen” cadence, while still playing the tuba, he sings and harmonizes, “Oh Yeah!”

Multi-instrumentalist/composer Matt Belzer has a diverse musical life. He has been a member of the avant-Latin group Mosaic, the classic jazz group The Peabody Ragtime Ensemble, and most recently the Anansi Trio. He is also a very active freelance musician, regularly performing on woodwinds at the Kennedy Center, the Library of Congress, and numerous theaters and concert halls in the region. His works are published on Advance Music and UNC Jazz Press. He has been honored by Downbeat magazine, the Jazz Composers Alliance and the Maryland State Arts Council. At UMBC, Mr. Belzer directs the large Jazz Ensemble and various small groups, teaches the jazz courses and saxophone lessons, and advises jazz students in their individual creative projects. He has written previous articles for the BJA newsletter.