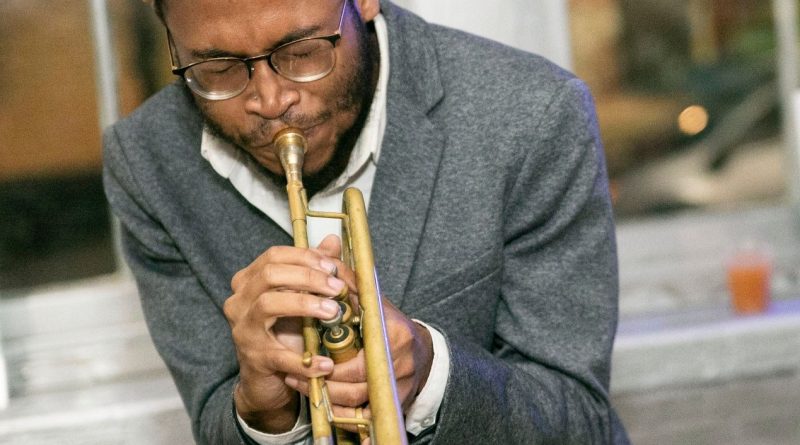 Sponsored by the Baltimore Jazz Alliance, No Pix After Dark, and Hamilton-Lauraville Main Street as part of its Second Saturdays concert series (June through September), the outdoor show at The Lot, 4500 Harford Road on August 13 by trumpeter Brandon Woody’s band UPENDO was a respite to a community hard hit by a severe thunderstorm the prior weekend.

Brandon Woody, a native of East Baltimore, is a 2016 graduate of Baltimore School for the Arts in 2016, an alum of Peabody Preparatory’s Tuned-In Program and the Brubeck Institute in California, and has studied under saxophonist Craig Alston. With his dazzling talent, he has streaked like a comet across the jazz scene in Baltimore and beyond. His band Upendo, which means “love” in Swahili, plays in a style that is a blend of genres, including jazz improvisation, hip-hop, and Gospel melodies—all what Woody calls Black music. The band has played at all major Baltimore venues and has been reviewed in B’more Arts and Capitol Bop. He was profiled by the late Mitch Mirkin in the Spring 2019 issue of the Baltimore Jazz Alliance newsletter {https://drive.google.com/drive/folders/1A3jvGJKNoM4czkkZ2UGPEB_uBoJ6KLaK).

As the concert began, the crowd settled into their lawn chairs and onto staked-out blankets, on the sawdust-covered open seating area in front of the stage, while noshing on burgers and hotdogs and sipping craft beers, canned wines, or soft drinks provided by ZEKE’S CAFÉ, a favorite gathering space for the community.

This concert featured all originals by Woody. The first two songs set a relaxed mood, featuring piano and drum playing a slow 4/4 time, before Brandon joined in with staccato trumpet in counterpoint. Changing gears, the band shifted to more upbeat tunes with a beat suggesting reggae and go-go, with spectacular solos and call-and-response riffs by saxophonist Robert Gilliam], trumpeter Theljon Allen, and Woody himself, anchored by the steady rhythm section – Troy Long (keyboard), Charlie Powell (guitar), Will Hazel (bass), and Quincy Phillips (drums).

After a solid hour of performing, the band took a break, during which Woody was feted with a birthday cake from local bakery Bramble Baking Co., as the crowd sang him “Happy Birthday.”
The following set continued the energy begun earlier, causing one sweet little girl to get up in front of the stage and dance with pure joy, until her father scooped her up and carried her aside. I told her father, “She wasn’t bothering nobody! She was keeping the beat and enjoying herself!”

Jackie Oldham is a Baltimore native who writes essays, poetry, memoirs, and short stories on many topics in her blog, https://www.baltimoreblackwoman.com. She has done readings at various Baltimore venues and on radio shows. Her essays have appeared as editorials and letters in the Baltimore Sun. She retired from a career as a copy editor, trainer, and team leader for the former Waverly Press and its successors. She is also a musician who loves all kinds of music, including jazz.