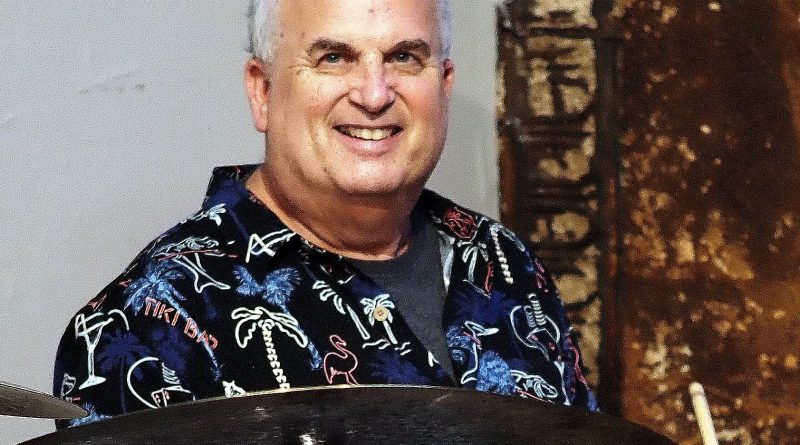 Drummer Chuck Karner is one of Baltimore’s jazz treasures. “Chuck is a unique musician who brings a childlike mischievousness to his jazz stylings,” says pianist Matthew George, who has often played with Karner. “He is an entertaining person as well as performer, and it has been a pleasure playing with him these many years.” Liz Fixsen, who has been involved with Karner in various jazz settings, gives testimony to his playfulness. She recalls how once at a Django jazz jam at The Avenue Kitchen in Hamden, he played “percussion” while seated at the bar, using metal twizzle sticks and beverage glasses with various quantities of liquid, and other objects. Fixsen says, “Chuck’s playing is always confident and tasteful. He is never intrusive, but he is never just marking time. He is always playing something interesting and inventive, sometimes changing the groove in the middle of the tune, just to liven things up.”

Chuck Karner was born in Baltimore City, and his family later moved to Harford County, Maryland. Early in life Chuck was exposed to music by his parents. They played music in the house, and his mother often sang songs of the past and present.

He received his early musical training in the Harford County Public school system. He developed an interest in drums in the fourth grade. In his middle school years, he had his first professional gig with a rock band he formed with some friends at the age of 12. Karner continued to develop his drumming skills and musical knowledge through high school. The instrumental music program was a major key to his development. At University of Maryland, Baltimore County he studied under Dr. Stuart Smith

Karner names as some of his influences on drums Jack DeJohnette, Dennis Chambers, Tony Williams, Elvin Jones, and Max Roach, all examples of master drummers. He once “tracked” Max Roach to a hotel near a performance to have a conversation and get some insight from the master.

He received instruction from Steve Ashcraft, who played in the Hank Levy Big Band, and through this instruction he learned about his role as a drummer in a big band. He learned about following form and about knowing the melody throughout the song. He has internalized these lessons in his playing. One lesson in particular is to play an accent after every eight bars to keep the form together.  Some others who have been very helpful in Chuck’s development include drummer Tony Sweet, pianist Bob Butta, and saxophonist Ron Diehl.

Currently Karner plays with several bands and house bands in the Baltimore area. He has played with many of Baltimore’s most noted players, including Michael Raitzyk, Seth Kibel, Michael Joseph Harris, Bob Boguslaw, Darryl Brenzel; he often played with the late Paul Wingo at the erstwhile famous Tuesday nights at Bertha’s Mussels in Fells Point. Currently, he is rehearsing with a trio, including Ned Judy on Keys and Larry Melton on bass, that will feature the music of Wayne Shorter. He also plays with the Worthy Brothers (Eric and Zach). Karner enjoys teaching music at his home studio and also subbing for Eric Kennedy at the Music Workshop in Baltimore.

Karner talks and plays with joy and pleasure, and the only fear he has musically is a musical train wreck–which he is always ready to fix! In my experience, his playing and attitude is always positive and energetic. He is always eager to play and encourage others.

Some of Karner’s philosophies of music revolves around music as a healing for people. He is very thankful to all the teachings and direction he has received over the years and he feels very blessed to be able to make people smile and be happy during a musical experience. He believes that music is an art and that its creation can affect the artists, their friends, students, the audience, and other artists. This creative process is enriched by musicians coming together and developing and performing. This brings people together, invites discussion on life, meeting and finding what we all have in common.

He also encourages people to go hear live music, visit art shows, or hear poetry. Supporting the arts will enrich your life, says Karner. Not just to enjoy the art,  but to meet people and converse with people. “If I can make someone feel something,” says Karner, “that means everything to me! It’s a privilege to take people on a journey for a while and be energized by music… Music riches life and eases troubles”

Karner is currently retired and staying at home as a “house father,” enjoying his home projects and his time with his grandchildren. But making music –and bringing joy in doing it – is still a big part of Karner’s life.

Terry Koger is a jazz saxophonist, leader of the Terry Koger Quintet, which performs regularly throughout the Baltimore/D.C. region. He has taught saxophone, clarinet, oboe and bassoon in the Baltimore/Washington area  for over 30 years. Terry has contributed to the BJA newsletter in the past.