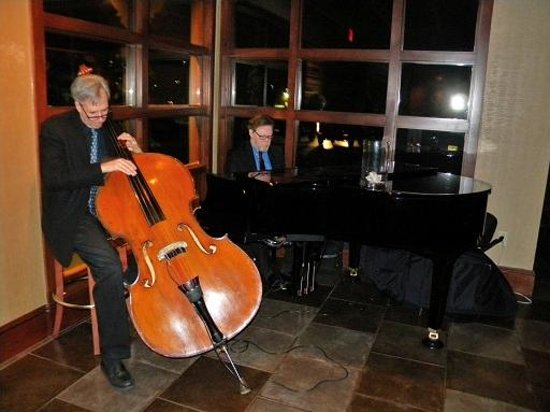 Baltimore City is a Sindbad’s Cave of riches for fans of jazz, with a plethora of venues presenting all types of jazz, just about any night of the week.  But for those who’d like to venture a bit farther out, more treasures lie a mere 20 to 25 miles outside the borders of the city. Howard County, whose northern border comes within 2-1/2 miles of the border of the city of Baltimore, boasts several venues offering live jazz.

In Ellicott City, about 20 miles west of Baltimore, at the White Oak Tavern, in the Enchanted Forest Shopping Center at 10300 Baltimore National Pike, you can enjoy a relaxing Sunday jazz brunch from 11 am to 2 pm. Two trios alternate Sundays: one is led by bassist Ben Grant with guitarist Jim Cunningham and drummer John Parsons; the other by guitarist Tom Lagana, with bassist Tom Baldwin and drummer Dominic Smith. The establishment prides itself on locally-sourced, seasonal, sustainable foods and on its wide array of craft beers, served in a lively pub atmosphere. The brunch includes “unlimited brunch cocktails.” Live music of other genres is presented throughout the week.

Also in Ellicott City, at 8180 Main Street in the heart of the historic district, you’ll find Syriana Café, in a four-story built in the 1790s of local granite. They host live music, including some jazz, on Friday and Saturday nights, 7 to 9 pm, and occasionally on Sunday afternoons, 1 to 3 pm. The jazz lineup includes Baltimore favorites such as The Worthy Brothers (Eric on bass and Zach on piano), Joel-Michael Schwartz (mandolin, guitar), Max Jacobs (violin), Andrew Ellis (piano) and Walter Heber (bass) and other duos playing in the second-floor dining room. The Café offers a menu of Middle Eastern dishes, and on the first floor, the Syrian owners have set up an eye-catching display of Middle Eastern objects d’art, many for sale.

Another Ellicott City gem is the Little Market Café, facing Tonge Row and Parking Lot D, and flanked by venerable stone buildings from the 1800s, once housing for mill workers, now occupied by specialty shops. The café offers an array of sandwiches, wraps, pizza, and salads in a delightful outdoor eating area facing the stage where live music, including the occasional jazz performance, is presented. If the weather is chilly, guests can stay warm by an open-pit fire in front of the stage. In July, the café hosted The Main Street Jazz Group.

There is also the Judges Bench Pub, 8385 Main Street on the west end of town, hosting jazz jam sessions on the first and third Tuesday of the month. Guitarist Michael Banham hosts the first Tuesday, with bassist Walter Heber and drummer Jim Deshler.  Pianist and trumpeter Mike Grasso hosts the third Tuesday with bassist Steve Zurier and drummer Neal Bam Feldman. Lots of Baltimore jazz folk are regular participants, including Mark Kraemer, Jim Martino, Lionel Lyles, Michael Weber, Mike Graham, and others, and singers often sit in with the band. The pub offers typical pub fare featuring craft beer, claiming the “largest selection of single malt whiskies in Maryland,” and numerous bourbons, ryes, wine, and other spirits served up by Tony and Natalie in a crowded but convivial atmosphere bathed in the light of the colorful neon window signs.

Heading down Route 29 into Columbia, you’ll find two more great establishments featuring live jazz. One is Stanford Grill, 8900 Stanford Blvd, a hidden treasure up on a hill overlooking Route 175, tucked away a maze of nondescript office buildings and parking lots. A jazz trio plays there Thursday through Sunday, 6 to 9 pm, with pianist Bob Deiner presiding at the baby grand next to the bar. He is accompanied by some of the region’s most accomplished sidemen, including guitarists Steve Abshire (Thursdays and Fridays) Rick Whitehead (Saturday and Sunday) and bassists Amy Shook, Peter Nevell and Max Murray. Tim Smith writes in his 2018 review in the Baltimore Sun, “This establishment has the clubby-but-not-too-exclusive look down pat– lots of wood; crisp white shirts and black vests for the servers; rows of cozy booths; a long rectangular gas fire casting its refined glow; a suave jazz combo playing nightly in a corner of the bar area.” (If you want to hear the music, sit in the bar; unfortunately the sound doesn’t carry far into the dining room). The specialty at Stanford Grill is roast chicken, and they keep a row of whole birds turning on a spit in full view on a wood-fired rotisserie.

18th and 21st is another classy establishment in the heart of Columbia, at the corner of Broken Land Parkway and Little Patuxent Parkway, a short distance from Merriweather Pavilion. Named for the constitutional amendments that imposed and then lifted Prohibition, the club aims to emulate the atmosphere of a posh Prohibition-era supper club. Like Stanford Grill, the club boasts a small grand piano, and features duos and trios playing jazz from 6 to 10 pm on Tuesdays, Wednesdays, and Thursdays, 6 to 11 pm on Friday and Saturday nights, and 5 to 9pm on Sunday evenings. Recent performers include the Unified Jazz Ensemble, Sara Jones, Bob Butta, Todd Simon, and others. The menu includes small plates, mid-Atlantic seafood, and classic cuts of beef, with more unusual dishes such as lobster Poutine and duck pastrami.  The bar offers barrel-aged cocktails like the “Smoked Old Fashioned,” with Henry McKenna 100-proof bourbon and brown sugar.

So take that half-hour drive outside the city to enjoy some new jazz experiences in Howard County – and help those venues continue to support live jazz.

Liz Fixsen is a long-time jazz fan and a regular presence in the Baltimore jazz scene. She plays jazz piano and also performs occasionally as a jazz vocalist. She is a member of the board of the Baltimore Jazz Alliance; she edits and writes for the BJA newsletter. Transparency notice: Liz has performed at Little Market Café and Syriana Café.