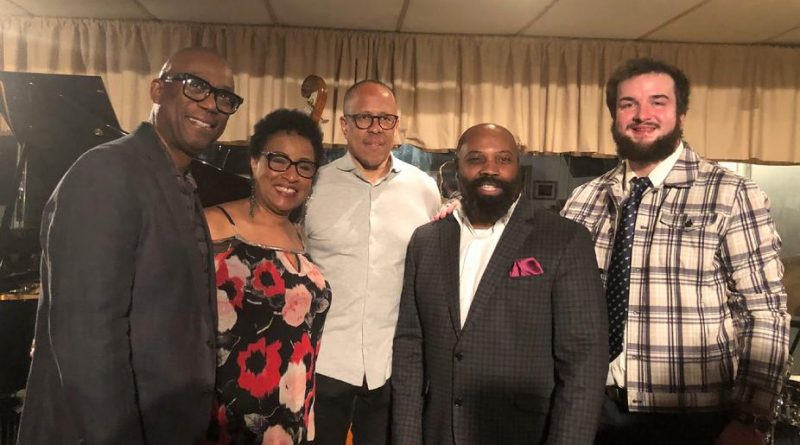 On April 30, 2022, the Caton Castle presented the Paul Carr Quintet, featuring vocalist Vanessa Rubin. The personnel included Paul Carr on tenor and soprano sax, Allyn Johnson on piano, Michael Bowie on acoustic bass, and Chris Latona on drums. Rubin’s reputation as a top-notch jazz vocalist preceded her, and the winsome lady did not disappoint.

Washington, D.C.-based impresario Paul Carr assembled the players for this date from his vast list of music industry contacts developed over more than a decade of shepherding the annual Mid-Atlantic Jazz Festival, and an even longer stint of teaching and performing America’s only indigenous art form in and around the nation’s capital.

Over the years, Carr has been a pipeline for exceptional musical performances at the Caton Castle, in the same way that saxophonist/composer Jimmy Heath (1926-2020) was once the New York connection for the bygone Left Bank Jazz Society, supplying the biggest names in jazz for local shows at the old Famous Ballroom, back in the day (1960s to 1980s); see I Walked with Giants: The Autobiography of Jimmy Heath. with Joseph McLaren (2010).

Slowing down the pace, Carr brought this same sensibility to a John Coltrane (1926-1967)  signature ballad, “I Hear A Rhapsody,” shading the melody in different tones against bluesy piano vamping. Indeed, a bouncy piano break was reminiscent of Erroll Garner (1921-1977) with its swinging rhythm that shifted in pace to allow for intervals of spacious tinkling against a recurring boogie-woogie-ish refrain.

Latona’s laid-back drum work was solid throughout, keeping steady time when not soloing brilliantly, as on “Invitation.” And Bowie’s bass was rock steady, with remarkable solos on “I Hear A Rhapsody” and pianist Mulgrew Miller’s (1955-2013) “Soul-Leo.”

Bowie’s bass solo work takes on a melodic quality, almost guitar-like with its pronounced plucking in a staggered rhythm that incorporates countervailing high/low note inflections. He characteristically interpolates harmonious themes, like inserting the melody from the churchy “Down By The Riverside” into the middle of his “Soul-Leo” solo.

A veteran performer on the national scene, Rubin has recorded multiple albums over her long career, including her latest, The Dream is You, a tribute to fellow Cleveland, Ohio native and prolific jazz composer, Tadd Dameron (1917-1965). From her newest CD, Vanessa sang “Next Time Around,” a melancholy ballad framed by voluptuous piano vamping over the hesitating downbeat of the bass and soulful brush strokes on tender drums, while the tenor sax accompaniment faintly hugged the melody. “On A Misty Night” was another torch song rendering from the newest CD, which also features Tadd Dameron’s calling card: “If You Could See Me Now.”

Her repertoire placed Rubin squarely in the tradition of acclaimed jazz divas, a fact she acknowledged with regard to “Now Baby or Never,” taken from a Billie Holiday recording with Count Basie (1904-1984), wherein Rubin credited her “scat line” as coming from “Sassy’s Blues” by Sarah Vaughn (1924-1990). Moreover, Rubin sang “Save Your Love For Me,” a tune popularized by Nancy Wilson (1937-2018) and “You’ve Changed,” a lover’s lament recorded by Billie Holiday (1915-1959) and later by her protege, Etta Jones (1928-2001): Check out the CD entitled Etta Jones Sings Lady Day.

For good measure, a handful of other vocal tunes were thrown in, including “What’ll I Do,” composed by Irving Berlin (1888-1989); “Are You Ready For Me?,” a naughty blues number; “Moonglow,” a Big Band-era staple; and “Down Here On The Ground,” the theme song from Paul Newman’s movie, Cool Hand Luke.

A consummate performer, Rubin charmed the audience by teasingly referring to pianist Allyn Johnson as her uncle, when he’s clearly a generation younger than she is. Showmanship point well taken: You’re only as old as you feel. In full-throated form, Vanessa Rubin is still the belle of the ball.