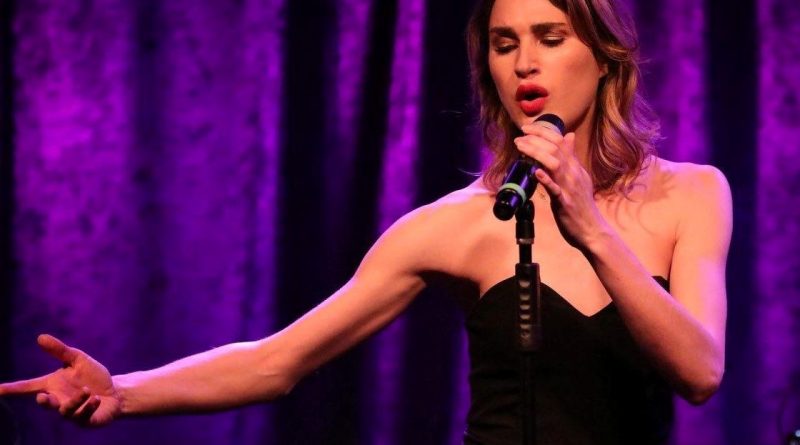 The Baltimore jazz community was clearly thrilled to have Mariah Bonner back in her native city, judging from the audience turnout and enthusiasm at Keystone Korner for her April 13 event, “Yours in Song.” The diversity of her repertoire demonstrated the richness of her worldly travels and acquired skills, delighting fans with a creative and eclectic set list.

Born in Baltimore as the third of six children, Bonner lived in France as a child and took up theater and ballet; in her teens she studied in London at the Guildhall School of Music and Drama. From there, she pursued a career as an actress in Los Angeles, appearing in a variety of television shows and films. There she also launched into the realm of cabaret with her first show at the Gardenia Room in West Hollywood. Since moving back to Baltimore in 2017, she has performed at Germano’s Cabaret, Jazz+Soju, De Kleine Duivel, The Wine Collective, and, most frequently, the cabaret at Monarque in Harbor East. She has also released her second album, Yours in Song, which was featured at her Keystone Korner show.

Her repertoire, in French and English, ranges from American standards, French ballads, and musical show tunes to new material. Her fluency in the French language came through in her song selections, and she sang every word as if it were the most beautiful in the language. Her comfort level on stage with the microphone and her ease in engaging with the audience, throughout song and dialogue, all attest to the truth that she was born to be a performer.

Joining Bonner on stage at Keystone Korner were Marcus Dagan, her musical director, on piano; Derek Wiegmann on bass; Corey Hewitt on drums; and Gabriel Wallace on saxophone and clarinet.

Lauren Silinsky attended the concert and shared the following impressions with me:

Most of the tunes would begin with a rubato piano introduction; then the other instruments would join and build in intensity as Bonner sang, ending the song in a decrescendo with just her and the piano.

“Dance Me to the End of Love,” by Canadian songwriter Leonard Cohen, in a minor key, had an Eastern European feel. “Maybe This Time,” made famous by Liza Minelli in the 1972 film Cabaret, was almost reminiscent of Bette Midler’s impressive vocal range,  building to a climax and then coming to a soft and gentle ending.

“Mourir Sur Scene,” written by Michel Jouveaux and Jeff Barnel, is widely considered to be one of the most popular French songs in music history. It tells a story most fitting for a cabaret singer: “There are those who want to die on a rainy day / And others in full sun, / There are those who want to die alone in a bed /Quiet in their sleep / I want to die on stage in front of the spotlight /Yes I want to die on stage.” Bonner sang it in French with a wonderful fluidity. Her theatrical background shone through her grand sweeping arm motions that expressed her emotional connection to the tune. Bonner commented on a line from one of Shakespeare’s plays, “all the world’s a stage,” and so, she observed, we all are born and die on the stage of life – a rich and beautiful phrase to describe the creative process and its vulnerability, equating birth and death.

Bonner and Dagan teamed up on “Come in From the Rain” (by Melissa Manchester and Carol Bayer Sager) and “Warm” (written by David Buskin), with Dagan contributing his almost Bob Dylan-esque speaking/singing voice to Bonner’s warm, rich tones, as they told the story.

The famous Edith Piaf song “La Vie en Rose” displayed Bonner’s expressive dynamics on another French tune, about being in love and seeing life through rose tinted glasses. Bonner engagingly offered tips to the audience on how to speak French, inviting them to join her in singing a chorus of “la la la’s.” The audience cheered with delight – another testament to how connected her fans are to her and to her skills in creating those authentic connections.

“Keepin’ Out of Mischief” was a jazzier Fats Waller swing tune in which the drummer Hewitt  had a chance to show off his chops after laying low in the background. The song ended with a theatrical, Broadway-style flourish.

“The First Time Ever I Saw Your Face,” made famous by Roberta Flack, also took on a story-telling mode. Bonner’s voice rose smoothly into higher octaves while Dagan provided whimsical piano accompaniment. She moved from singing into speaking, sometimes jesting, sometimes somber, with analogies about the birth of a new day and having minimal regrets in life.

The 1941 song “Yours,” made famous by Vera Lynn, was sung first by Dagan in Spanish, and then by Bonner in English. She followed with nostalgic recollections of singing and dancing her way through childhood, ingraining music in her life since youth. She then transitioned to the next song with a charming anecdote about inventing songs for her family members on Valentine’s Day.

“Caught in Memories,” an original with a calypso feel by Marcus Dagan about the dangers of keeping a diary, was a natural segue from Bonner’s reminiscences of childhood. Dagan’s song, however, warned against drowning in the past. On this song, Wallace switched from sax to clarinet, making a paradoxical contrast to the somewhat darker subject matter.

The song “This is My Life” was just released as a music video on April 10th, with Dagan on piano. This song also had some of the theatrical quality of a Broadway musical, with powerful lyrics feelingly emotionally delivered by Bonner partly in song and partly in spoken word.

Another opportunity for audience participation was offered when Wallace’s sax solo on “Nowadays,” from the musical Chicago, prompted the audience to clap along in time.

Bonner played a tongue-in-cheek game with the audience on the next song, which she wouldn’t name. The song was made famous by Etta James, and is usually sung as a slow ballad – but on her version of  “At Last,” Bonner gave the song a distinctive, up-tempo swing treatment, flavored with a spicy sax solo.

The evening ended with what Bonner jestingly called her “obligatory encore”– Shirley Horn’s signature song, “Here’s to Life” – “No complaints and no regrets / I still believe in chasing dreams and placing bets /But I have learned that all you give is all you get / So you give it all you got.” And Mariah Bonner certainly gives it all she’s got, with her confident stage presence and her warm rapport with her audience–a testament to her nostalgic stories of being born to perform.

To learn more, visit Bonner’s website at https://www.themariahbonner.com/, where you can order her two albums, At Last and Yours in Song.

–by Liz Fixsen and Lauren Silinsky

Liz Fixsen is a long-time jazz fan and a regular presence in the Baltimore jazz scene. She plays jazz piano and also performs occasionally as a jazz vocalist. She is a member of the board of the Baltimore Jazz Alliance; she edits and writes for the BJA newsletter.

Lauren Silinsky has a degree in radio and television broadcasting; has directed, shot, and produced promotional music videos for local artists in Chicago; co-hosted three radio shows in Chicago, and was also an Events Planner booking many Jazz artists for shows all over the city. She also wrote several tourism articles for “Where Magazine”- placed in major Chicago hotels. Since moving to Baltimore, Silinsky has become a familiar presence in the Baltimore jazz scene.