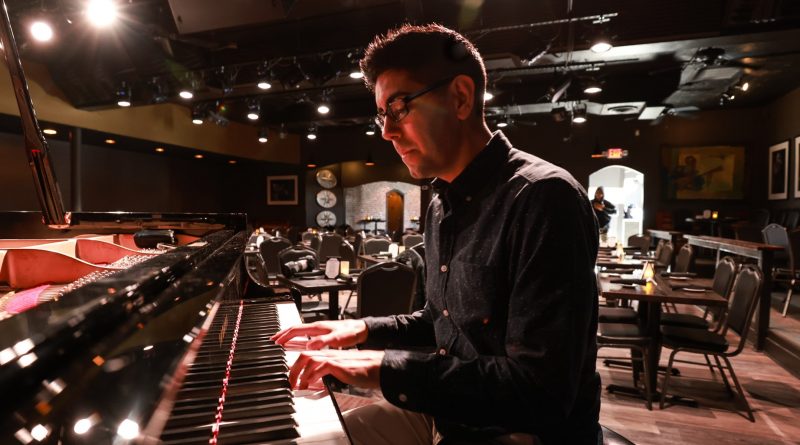 I love to imagine being a musician going on a tour—you load your gear in the van, fill up an ice chest with soda pops or whatever, throw in a pile of your favorite CDs, hop in with your bandmates, and you’re off on a merry adventure to play to cheering crowds in clubs and concert halls across the USA (or some part of it anyway).

Well, the reality is not so simple, as I learned from pianist Joshua Espinoza, who completed one tour last fall, from Baltimore through Virginia, North Carolina, and other parts south, and another this spring all over the eastern United States, including Ohio, Indiana, Kentucky, Tennessee, and Texas.  In fact, a tour requires a lot of advance planning – up to a year of it – and it’s like assembling a 1000-piece jig-saw puzzle – with no picture on the cover of the box to go by.

Espinoza starts with concert halls that are willing to consider hosting jazz performances—AND which have an acoustic piano on site; he just won’t play on a digital piano. AND venues which have a decent budget. Such halls are often booked up a year in advance. These are the “anchor gigs,” and the locations need to be no more than a day’s driving distance apart.  Once those major jigsaw pieces are in place, he infills with gigs at smaller venues where jazz is usually featured.

So how does he land those gigs when he is not a known quantity? The first rule to remember is: the squeaky wheel gets the grease. The venue may not respond to the first e-mail, or the second, or even the third. But maybe they’ll respond to the fourth. Booking agents are busy people! First, he researches what kinds of music they have booked in the past, to try and make a connection. Then his message provides some background information, some press quotes, a video, a history of performances at similar venues, etc., etc. And his promises to do his part in promoting the show.

With all this work, it’s easy to see how it can take a year to arrange a tour. Funding is another issue. Last Fall, Espinoza received funding from South Arts “Jazz Roads” touring grant (https://www.southarts.org/artist-grants-fellowships/jazz-road), which offers grants up to $15,000 to artists from anywhere in the USA touring anywhere in the USA. But they require a year between grant applications, so for his spring tour, Espinoza was looking specifically for presenters with big budgets and venues with a healthy subscriber list.

So why go on tour? As Espinoza explains, he likes to present the same music to different audiences in different ways with the same band members. It allows them to explore their repertoire more fully and dig in with deeper creativity. It also fosters a strong bond between the band members; his two sidemen are Kris Monson on bass and Jaron Lamar Davis on drums. He finds them very genial touring buddies – the three have grown in trust and familiarity and the willingness to take chances.  They like to go into the studio after a tour, to more thoroughly work out the changes in their material that have developed over the course of the tour.

One of the notable venues where the trio performed on their spring tour was a beautiful old library at Oxmoor Farm, in Louisville, Kentucky. They played on an oriental rug over a parquet floor in front of a fireplace flanked by wall-high shelves of venerable old books, looking for all the world like a scene from Downton Abbey. With the audience seated only a few feet away, the space gave an intimate feel and had great acoustics, says Espinoza; sometimes the acoustics in a large venue can interfere with the musicians’ ability to hear one another. Another remarkable venue was the Memorial Hall, in Cincinnati, an elegant, century-old historic structure with a 556-seat round proscenium theater featuring exceptional acoustics, decorative murals, and Tiffany chandeliers.

And how do the audiences respond? Especially in regions of the country where jazz is not as closely tied to local culture? The smaller venues that Espinoza books are those that already feature jazz, so audiences know what they are getting. But the concert halls that book mostly classical music are often willing to take a chance on something different. And audiences who thought they “didn’t like jazz” come away with a different perspective.

Having heard Espinoza play at Keystone Korner and other Baltimore venues, and having listened many, many times to his album, Journey into Night, there is no doubt in my mind that all of those audiences would have been pretty much blown away after hearing his shows.

When not touring or planning tours, Espinoza is also running Patterson Park Academy of Music, which he started during the pandemic. The school currently has five instructors and 80 kids enrolled. Teaching is his passion; he believes in making music instruction accessible to all. “There is a place for every musician,” he says. “We need music everywhere.”

As he continues his touring career, Joshua Espinoza is doing his part to bring his music just about everywhere. You can find him on his website, Espinozaespinoza.com, on Facebook, and Spotify. And he is already building his fall tour.

Liz Fixsen is a long-time jazz fan and a regular presence in the Baltimore jazz scene. She plays jazz piano and also performs occasionally as a jazz vocalist. She is a member of the board of the Baltimore Jazz Alliance; she edits and writes for the BJA newsletter. She teaches adult ESL with Project Literacy.