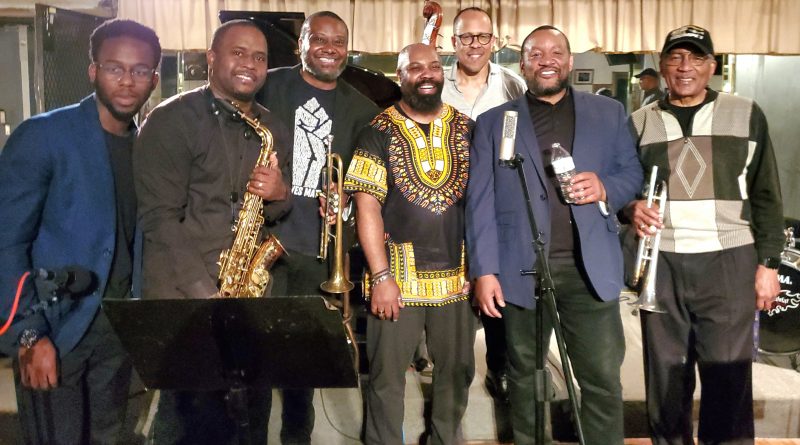 On April 2, 2022, the Caton Castle presented the John R. Lamkin, III Sextet, featuring a group of regional all-stars:  Sean Jones on trumpet, Tim Green on alto sax, Robert Gilliam on tenor sax, Allyn Johnson on piano, Michael Bowie on acoustic bass and John R. Lamkin, III on drums. This group relaunched the Caton Castle’s regularly scheduled jazz shows after a two-year hiatus due to pandemic restrictions. The pent-up desire to play and to hear the music was palpable, with the full capacity audience enthusiastically applauding Lamkin’s opening exclamation: “It’s been two years!” Then the volcano erupted.

“All Blues,” the modal masterpiece from Miles Davis’ classic album, Kind of Blue, led off the first set with a distinctive bass introduction that morphed into a three-horn statement of the melodic theme. The muted trumpet then riffed in varying tones, shading the melody against the powerful rhythmic framing of pace-setting drums and spacious piano comping, all anchored by the relentless downbeat of the bass. An extended trumpet solo recalled the exuberance of  Freddie Hubbard more than the “cool” of Miles Davis, but both influences were apparent.

Gilliam is the only relative newcomer in this group, having appeared at the Caton Castle on one previous occasion in a band that included Sean Jones, his teacher at the Peabody Conservatory. At age 22, Gilliam now flexes a grown man’s voice on tenor sax, with a hard tone on “All Blues” that flittered  harmonically in a yawning range. Green, on the other hand, has been a Caton Castle regular for more than a decade. It was “long time, no see,” with Green’s masterful intonation on alto sax dazzling the audience, displaying the musical fruits of his sojourn in academia; Green and Jones are both on the jazz faculty of Peabody Institute of Music

Thelonious Monk’s “Evidence” featured the alto sax in Bird-like (Charlie Parker) flight, rolling notes in the frenetic manner of the bebop master, while the tenor sax articulated the melody in repeated middle-register riffs, with insistent embellishments. A trumpet break was slurred in tone, suggesting the swagger of trumpet icon Lee Morgan. And a piano excursion channeled the off-beat Monk with an element of rhythmic hesitation, building ascending tension that gave way to a bass solo, thematically busy in its restatement of the rhythm. Through it all, the intricate refrains of  pulsating drums and restless cymbals resounded.

It didn’t take long for many of us to realize what we had missed during the extended live music drought. The explosive presence of this group was not just heard, but also felt. Even a few bars of “Happy Birthday” addressed to a lovely lady named Brittany drew an animated audience response.

The trumpet shone on two jazz standards by trumpet masters. “Up Jumped Spring,” Freddie Hubbard’s waltz-like tune suggesting  breezes and flowers and birds aborning, showed the trumpet in a dexterous mode, tone shifting from crisp to blurred to screeching in a sing-song pattern as whimsical as the weather in March. And Lee Morgan’s “Ceora” introduced a Latin flavor to the proceedings, with the trumpet sifting the melody in a lilting solo that contrasted with the harmonically trenchant alto sax and a melody-stretching tenor sax, with its bracing tone peppered by blunted accents.

On “Ceora,” the piano was typically expansive, with an airy phrasing that included abstract tinkling within the melody and the terse interjection of harmonious themes that were vaguely recognizable. This pattern was repeated on “Straight Ahead,” a galloping Horace Silver-type swing number that included a powerful drum solo.

For those who are partial to ballads, the group delivered two gems. “We’ll Be Together Again” showcased the mellow tone of the alto sax, locating Green somewhere on the silky alto sax ballad continuum of “Cannonball” Adderley, “Sonny” Stitt and Jackie McLean. Secondly, “Body and Soul” featured a bravura trumpet performance, captivating from its misty introduction which hinted at the melody of “Stardust Memories” before bursting into clear outlines of “Body and Soul.” Alternating between prolonged notes and brief ejaculations, the lofty trumpet defined the classic ballad, adding flashes of staccato accents. Along the way, there was shadowing of familiar tunes and other melodic conceits that were ultimately resolved in a climactic flourish by the blustery trumpet. Indeed, the audience was treated to something special, and responded with a standing ovation.

Jazz standards have a reflexive appeal to the predominantly gray-haired Caton Castle audience. They take us back down memory lane. Trumpeter John R. Lamkin, II, the father of this group’s drummer, sat-in on a spirited rendition of “Bye Bye Blackbird,” a signature tune for Miles Davis in the 1950s. In this same vein, “Moanin’,” pianist Bobby Timmons’ swinging classic that was popularized by Art Blakey’s Jazz Messengers, closed out the show in a rousing fashion.

We know not what tomorrow may bring, but on this night jazz at the Caton Castle returned in all of its glory.