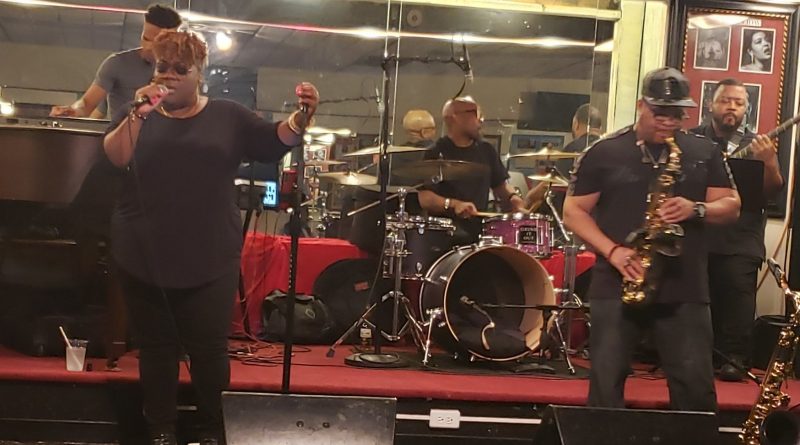 Saturday April 16, from 3 to 7 pm, the Arch Social Club (ASC) and the Baltimore Jazz Alliance (BJA) hosted a Jazz Appreciation Month celebration that was a success on all levels, with two DJs, a top-flight jazz band, and a 250-capacity hall filled with people grooving to the music, dancing, and socializing.
Opening remarks were made by Ron Miles, community organizer who has spearheaded efforts to renovate the Chick Webb Recreation Center in East Baltimore, and by and Peter Brooks, grandson of Baltimore jazz legend Cab Calloway. BJA President Tyrone Crawley made a presentation about the BJA, explaining its mission and programs, and announcing that a donation of $20 or more to ASC would earn a free one-year membership to the BJA – an offer that was met with a rousing cheer from the crowd. Two BJA members, Alice Downs and Jean Farnsworth, were busy at the BJA table, where they eventually signed up 12 new BJA members.
On that high note, DJ Sleepy J kicked off the music, playing mixes of hip-hop linked to the Jazz and R&B songs that inspired the hip hop samples. Many people were surprised by learning where the hip hop samples were originated.

The main feature of the event was The Craig Alston Syndicate, playing a mix of jazz and soul favorites, with Eddie Baccus Jr on sax. Karen Linnette on vocals, Rodney Kelley Jr. on keys, Spyda the Drummer on drums, Alston on bass. Crawley called them “a force to be reckoned with,” and shares his impressions:
The crowd felt it as they whooped and hollered at several give-and-take moments. The vocalist was perfect for this event. She connected younger people to the older songs and vice versa. She got people on the dance floor, singing from their seats, and keeping the bar maids hopping—if the bar is jumping, the joint is jumping! When DJ Lampdog [a.k.a. John Lampkin III] kicked off his set, there was no let down. Once his set began, the dance floor was never empty. Alice [Downs] and I even shook off a few years out on the hardwood. Most people remained to the end and crowded the dance floor as the DJ gave them a lesson in line dancing.
Crawley also gave kudos to BJA board member Tre Barr who created a promotional poster and arranged the entertainment, and also to Denise Griffith of ASC, who organized the event. It was a grand time for all who attended.

The Arch Social Club, at 2426 Pennsylvania Ave, is a venerable Baltimore jazz institution, was casually founded in 1905 and officially incorporated on March 15, 1912. One of the oldest black social and civic organizations in Baltimore, it was a cultural and social haven for Black people suffering in Baltimore’s repressive racial environment. Today, the club occupies the former Schanze Theatre erected at Pennsylvania and North Avenue in 1912. Learn more at https://baltimoreheritage.github.io/civil-rights-heritage/places/arch-social-club/