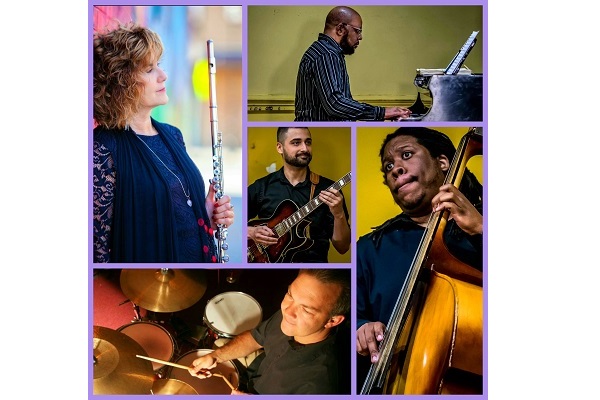 Near the beginning of his concert on February 18th,  bandleader Eric Worthy explained how the band came to be called the Transformation Ensemble: “Everyone here has been through some transformation or another.” For Worthy, it was the passing of his mother and the birth of his first child. For flutist Andrea Brachfeld, it was a similar “transformation” — the birth of her first grandchild, which prompted her move from New York to Baltimore. She and Eric met at a jam session at Terra Café, admired each other’s playing, and soon formed plans for a musical collaboration, joined by Eric’s brother Zachary on piano, Steve Caballero on guitar, Frank Russo on drums, and Eric himself on bass. This concert was the first concert of that collaboration, one exhibiting great creativity and originality as well as a wonderful rapport and camaraderie among the members of the band.

The band opened with “Cantabile,” by French jazz pianist MichelPetrucciani,a tune with  a relaxed, swingy bounce, like a walk in the park on a sunny day. Brachfeld’s flute suggested the trilling songs of birds in the trees, and the piano evoked the image of a dapper gentleman swinging an umbrella as he strolled along the avenue.

“Changin’ Up,” by Brachfeld, indeed was a change, with the piano bringing on the driving beat as the flute took on the jagged melody with its arresting stops and starts. Then Caballero grabbed the helm with a blazing guitar solo, backed by stabbing riffs on the piano. The ensuing solos by flute and piano brought the tune to a boil over the hot burner of Russo’s drumming. After Russo’s spirited solo, the last head came to a satisfyingly abrupt and dramatic end.

Cedar Walton’s “Holy Land” opened with a piano intro, a rubato arpeggio in a minor key, laying down the melody, before the flute picked it up for the main head. Another piano interlude with some classical-style flourishes brought in the second iteration of the melodic head, before the band, steadily supported by Eric’s strong bass line, launched into the swing groove. Zach’s playing flowed seamlessly across the boundaries between classical and swing, while Brachfeld’s solo made dizzying spirals like a flock of diving swallows, before Caballero took over, adeptly accenting the rhythm. The tune ended with another classical-like piano coda.

This was followed by “Class Act,” a Zach Worthy composition, a lilting number in ¾ time with intriguing Russo-inspired fluctuations in the waltz feel. The soloists sweetly narrated the story before coming in for a soft landing.

Brachfeld’s “This Is” followed, another cheerfully bouncing swing tune that gave Caballero further opportunity to display his impressive bebop chops and for Zach to exhibit his fluid mastery of the ivories.

The band stepped aside while Zach played “A Piano Sonata in E minor,” a pensive piece which he composed for Black History Month and which references Black spirituals throughout. In this piece, he most clearly manifested his subtle and sensitive classical virtuosity as the piece ended with a somber Rachmaninoff-like minor chord.

The band reassembled “Little Girl’s Song,” written by Brachfeld at the birth of her first child, another spritely waltz that expressed the joy but also the complications of bringing a new life in the world. An element of drama was introduced by Russo’s drum solo, accented by a repeated riff on the piano, and the drums brought the piece to a close.

“On the Way” followed, a relaxed little number by Tom Graf with a Latin-esque groove, and then another Worthy Brothers original called “Monkin’;”  a quirky, whimsical swing tune with repeated quotations of Thelonious Monk’s “Straight, No Chaser.” After that, Brachfeld switched to alto flute for a Billy Strayhorn standard, “A Flower is a Lovesome Thing.”

Brachfeld introduced the next number with a little story about when her then three-year-old grand-niece asked her, “Can I have some bebop?” Brachfeld wondered, what does this tot know about Dizzy Gillespie or Charlie Parker? –until the mom explained that “bebop” was the child’s word for “candy.” So Brachfeld wrote a jaunty little tune called “Bebop Hannah” that captured the playfulness of a three-year-old.

The last piece, “Seven Steps to Heaven,” by Miles Davis, opened with Russo on drums and then took off at a blistering pace, in which Brachfeld showed off her breathtaking chops, with blindingly fast melodic leaps and pirouettes, while Russo’s drumsticks were just blur, and again, as on other tunes, Caballero’s solo dazzled with long 16th-note passages.

It was rip-roaring end to a thoroughly enjoyable concert, performed with tremendous brio by this marvelous ensemble. Be looking forward to future collaborations between Brachfeld and the Worthy Brothers.

Flutist Andrea Brachfeld, a graduate of Manhattan School of Music, is an internationally renowned performer, composer, and band leaderwho has performed with the likes of Chick Corea and has released eight CDs and performed at the Havana Jazz Festival.  She has recorded and played many different genres of music including jazz, Brazilian jazz, Latin jazz, salsa, charanga, funk, country western, and devotional spiritual music. Read more at https://andreabrachfeld.com/

Bassist Eric Worthy, who also plays saxophone, has studied bass with Jeff Reed and Max Murray. He has played a range of venues and events around Baltimore and D.C., often with his brothers, pianist Zachary Worthy and saxophonist Aaron Worthy. He has been a mainstay at several Baltimore-area jam sessions, including at Clarence Ward’s session Monday nights at R House.

Zachary Worthy was a student of classical piano and has, in this and other concerts, demonstrated impressive mastery of some devilishly difficult classical pieces such as a Franz Liszt’s Transcendental etude No.10 (“Appassionata”). Read more at https://www.worthybrothersmusic.com/

Guitarist Steve Caballero studied with one of Baltimore’s great guitarists, Michael Raitzyk. Caballero recently graduated from University of North Florida, studying under Barry Greene, and while there, performed with several esteemed figures in today’s jazz scene. He has played in a variety of bands spanning a range of genres, including heavy metal, neo-soul, pop, punk, funk, Christian worship, math rock, fusion, alternative and more. Read more at https://stores.musicarts.com/instructors/steven-caballero

Drummer Frank Russo is a well-known and well-respected drummer in the Baltimore D.C. region and beyond. Raised in the New York City area in a musical family. Russo was a distinguished member of the prestigious Naval Academy Band  He is an in-demand performer, recording artist, and educator who teaches at Towson University. Read more at https://www.towson.edu/cofac/departments/music/facultystaff/frusso.html

Let’s hope this fabulous ensemble will perform again soon in Baltimore – and beyond.

One thought on “Transformation Ensemble Dazzles at An die Musik”