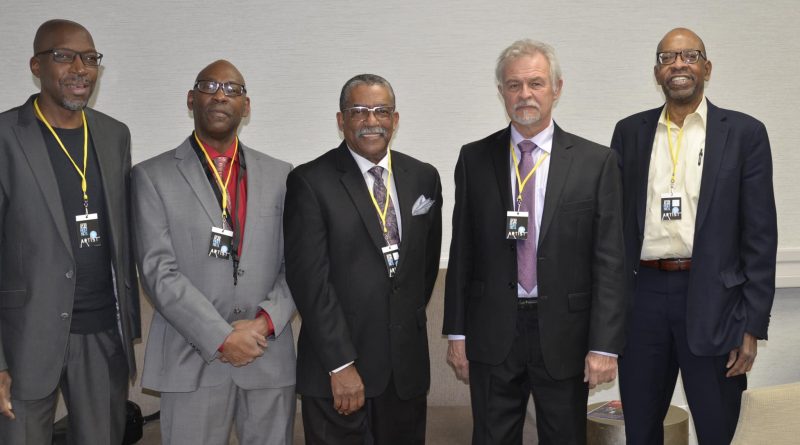 Terry Koger’s new album Out of Time grabbed my attention from the first bar, with Darrell Taylor’s powerful rolling drums introducing the great hymn “Lift Every Voice and Sing” (J. Rosamund Johnson). When the rest of the band enters in a strong rhythmic unison, it’s clear that this group intends to do just that. Short and sweet, at 1’36”, this rendition sets a tone of engagement and optimism, with just a hint of nostalgia. The classic spiritual “Wade in the Water” brings down the mood, but not the energy; the rolling moves from drums to piano and solo saxophone replaces the full band harmony, bringing the same feelings of hope and grace to a more personal, intimate level.

Having thus set the mood, taking the listener out of the mundane, the group then brings the feel straight back to earth with a solid rendition of Wes Montgomery’s “Road Song.” An intriguing rhythm twist happens as the band seems to shift between swing and funk, feeling almost unsettled, but never out of control. Other than that quirk, the band plays this pretty straight, with solid solos by Koger (alto saxophone), Freddie Dunn (trumpet), Bill Washburn (piano), and John Leonard (bass).

On Charles Mingus’s standard “Nostalgia in Times Square”, the group starts out with a simple but tasteful piano intro followed by the melody played on bass over light piano comping. Then the horns kick in with some beautifully crunchy harmony between them and the piano — almost more Monk than Mingus, but either way showing the group’s appreciation of harmonic experimentations introduced by those and other composers of that era. Washburn’s solo stood out especially on this song, showing off a style he often plays in which seems to channel Don Pullen — handfuls of notes thrown effortlessly at the piano creating a sound that is rich and full, but loose and on the verge of sloppiness without ever seeming unintentional. Loeonard’s bass solo also stood out on this tune, especially in its phrasing.

“Café Mocha,” a Terry Koger original, is a lovely waltz with a good mix of bounciness and grind — light and free, but a little bit gritty, as it should be. Again, Washburn’s comping caught my ear, and his solo in particular stood out as characteristic of the experimental, folkloric style that followed Pullen and others of his time.

Duke Ellington’s beautiful ballad “In a Sentimental Mood” is played straight and in character, with no real surprises, but a particularly strong, rich tone in Dunn’s trumpet solo.

“On the Trail,” from Ferde Grofé’s Grand Canyon Suite, is a surprising choice, with its Western, nostalgic feel, but the group adapts it beautifully, with Washburn playing a decorative, loping accompaniment to the straight melody, reminiscent of something Duke Ellington would play in some of his smaller combo settings. Both Koger and Dunn seem to be at their strongest on the album, giving this ‘outlier’ a definitive feeling of belonging.

Speaking of Duke Ellington, the group moves on to the Ellington/Tizol classic “Caravan,” a great contrast substituting the loping horses or donkeys of the American West for the camel-laden processions of the Saharan desert. Again, both horns play very strong solos, and excellent comping by Washburn.

After listening to Washburn hint at both Pullen and Ellington in his playing on the previous songs, I was surprised by his original “Charm City Shoutout,” though in hindsight it made perfect sense – a classic mid-century jazz sound, but with a touch of an edge. Mainly it was the tight rhythmic turnaround section that caught me pleasantly off guard. It fits perfectly with the song, but I wasn’t expecting such tight linear lines from someone whose playing seems much more thick and rounded. Wherever it came from, it worked great, and the song is one of the strongest on the album.

Capping off the album, Koger’s “Out of Time” is another solid win, based on a classic vamp feel with a clean solid A section followed by a more complex, but still solid, B section. Again I heard Pullen, and also Horace Silver, Hampton Hawes, even a little Ornette Coleman. A nice groove with a good melody, and the first and only chance for Taylor to play a drum solo, which he keeps short but strong and sweet.

Overall, this record reminds me of Koger himself: warm and humble, knowledgeable and respectful of his various roots, but not without an original voice. Nothing about the record is flashy — there are fast notes, but not too many, wailing, but not too much. The whole album feels in control and replete with the idioms and sentiments of the past, but with subtle expressions of personality that make it a pleasure to hear, another unique voice in a long tradition of classic jazz.