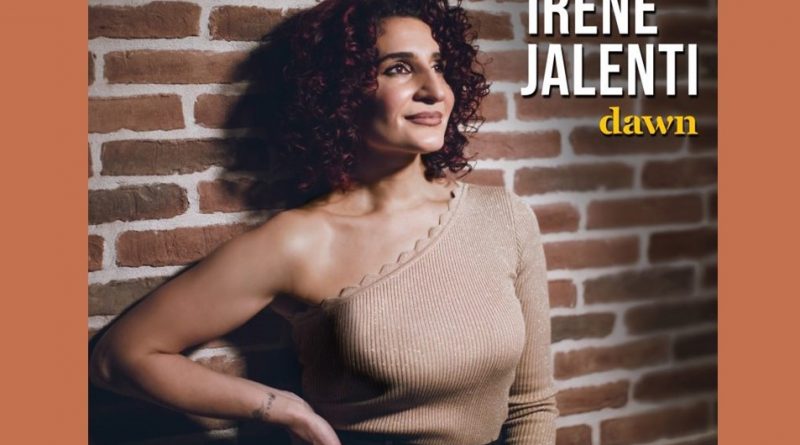 One of the qualities I always look for in an artist is a unique point of view—what they bring to the public conversation, something that is solely theirs. And so, it is  gratifying when an artist you have known for a while and watched perform and evolve creates a project that is extraordinary in its rich display of skill, personality, passion, and artistry–and crowned with a magical “something extra”.

Irene Jalenti’s new CD Dawn (funded in part by a grant from the Baltimore Jazz Alliance) is all those things and more. It’s a breathtaking recording, filled with  shining moments of  genre bending musicality. The result is a statement of her commitment to her ancestral roots, her love of jazz and improvisation and her determination to forge something new and contribute to the future direction of vocal jazz

The CD features four gorgeous original tunes by Jalenti and six standards/covers that are inventively reimagined through Jalenti’s arrangements.  Besides the dynamic vocals of  Irene Jalenti, the album  includes the always impressive rhythm section of  Baltimore-based musicians and educators, Alan Blackman on piano, Jeff Reed on bass and Eric Kennedy on drums.  Her guest artists are equally impressive, with Sean Jones on trumpet & flugelhorn on five tracks, Chris Perez on guitar on two tracks, and vibraphonist Warren Wolf in a duet with Jalenti on the title track.

Born in 1980 in Terni, Italy’s central Italian region of Umbria, Irene Jalenti comes from a musical family: her uncle, pop-star Sergio Endrigo as well as her uncle Mario Jalenti and cousin Francesco  Jalenti, both guitarists.  Her father was a record-store owner in Terni, and he encouraged all his daughter’s musical pursuits, including the study of piano and guitar. As a result, music and industriousness come to Jalenti as a normal practice.

After immigrating to Baltimore, she won a full scholarship at Peabody Conservatory in Baltimore, earning a BA in music and then went on to earn her master’s degree at Howard University, where she also became part of Howard’s renowned a Capela jazz ensemble Afro Blue. She currently teaches jazz and commercial voice at Syracuse University and is an impressive and sought-after jazz vocalist on the DC-Baltimore-Virginia jazz scene.

While many of us were watching Netflix and baking bread during the pandemic, Jalenti was inspired to pick up her guitar and begin writing songs that came from an inner voice during her sunrise routine and inspired by the instrumental works of her guitarist uncles.  The first of these inspirations was “Alma Desnuda” (Naked Soul). Using an A-minor harmonic line, Jalenti composed a tune that she first recorded on her phone. She was stunned when she played it back and realized it was the exactly the musical setting she was seeking for a poem by Argentine poet Alfonsina Storni. Storni’s words  begin with: “Soul that like the wind goes / wanders restless and at night / Sleeps sweetly in a crack.” The words continue with the vulnerability felt by the author:

I am a naked soul in these verses

A naked soul that anguished and alone,

A soul that can be a poppy,

That can be a lily, a violet,

A boulder, a forest, and a wave.

Jalenti’s sensitive melody embraces these words as someone who is many things at once and is unflinchingly exposing herself to the world.

“That’s How the Story Goes” is a fun, bluesy tune with clever lyrics and a knockout scat section. The tune complains about an individual who can’t look at their own mistakes and urges that individual to dig deeper for an inner truth.”

“Dawn,” the title track, is Jalenti’s musical setting of an ancient Greek poem by Meleager of Gadara. Warren Wolf’s vibraphone softly cushions the ambivalent lyrics with his dreamy rendering of Jalenti’s  melody:  “Dawn, hateful to lovers, Why do you rise so quickly, Beside my bed, When I lie with him? Can’t you turn around, Run back and be night again, And stop that sweet smiling, That pours out poison light?.” The pairing of Wolf’s instrumentation with Jalenti’s tender vocals is sublime and perfectly in sync. “Moon and Sun” is a hypnotizing ballad that represents a “meditation on the cycles of day and night” with Jones’ horn underscoring Jalenti’s lyrics.

Jalenti’s covers are completely reinvented and feel like new tunes. The Brazilian “Carinhoso” is an example of Choro or chorinho (a “cry” or “lament”). It is an Afro-Brazilian genre that originated in  19th century Rio de Janeiro. The arrangement with guitar and voice  beautifully illustrates how well suited  Jalenti’s voice is for this Brazilian genre. With Christian Perez’ guitar, it feels so authentic,  you can imagine it pouring out of a club  in Rio De Janeiro.

“Beautiful Love” is magnificently embellished with the overdubbing of Jalenti’s own vocal harmonies and scat phrases and her skillful trading of scat lines with Jones’  trumpet. Of “How Deep is The Ocean,” Jalenti explains:  “I was inspired by the Afro-Cuban 6/8 rhythms that you find in songs like Afro Blue with a bass ostinato that underlines the almost obsessive feel of love described in the song.

“You and The Night and The Music”  is another  tune with an Afro-Cuban feel, which is a particular  favorite of mine, and  reminiscent of Horace Silver. Blackman’s piano and Jones’ trumpet trade some playful improvisational lines in their solos and then Jalenti’s vocals suddenly enter, an octave higher than her earlier vocals, giving urgency to the  lyrics.

“Let it Be” is Blackman and Jalenti’s arrangement of the Lennon/McCartney song that I have heard them perform before. I am always blown away by Blackman’s piano and Jalenti’s phrasing that creates a poignancy I had not noticed before.

Her album, for me, is like an emotional trip around the world. Her ability to synthesize jazz, world music, Classical music, blues, and electronic genres is remarkably ambitious, especially for a first recording, and I am looking forward to her future projects. But for now, Jalenti has produced a compelling view of her inner voice in “Dawn.” In the words of “Alma Desnuda,” Jalenti has shown the world “a naked soul,” and all listeners are enriched for it.

Irene Jalenti’s CD and individual tunes can be purchased directly through her website www.irenejalenti.com and on iTunes and Amazon. Her upcoming performances can also be viewed on her website and include The Creative Cauldron, in Falls Church VA  on February 4th, 2022, along with several others that will have details posted soon.

Marianne Matheny-Katz is an accomplished jazz vocalist well known in the Mid-Atlantic region for her 20 years of performing; two-time award winner of the Billie Holiday competition and praised for her 2014 album, Somewhere in Paradise. She and her husband Howard Katz co-founded and have run the popular non-profit Jazzway 6004 house concert jazz series for 14+ years. Retired as an economist for the federal government (Army) in 2016, Marianne is currently working on recording her Joni Mitchell project.