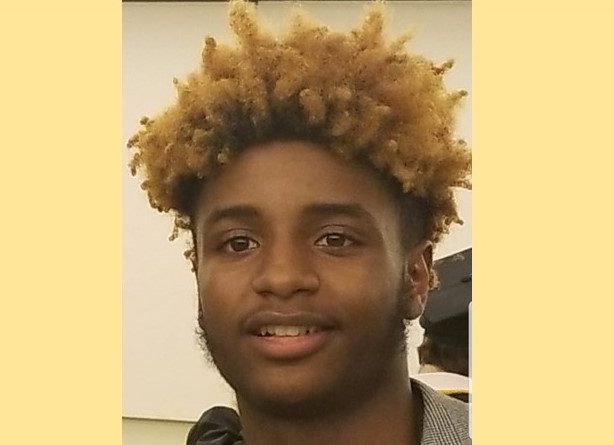 Baltimore seems to be fertile ground for growing talented young jazz musicians. Almost any Monday night, at the jam session at R House, you can see them lined up to show off their chops. And many of them are finding their way onto our local club stages. One of them is 21-year-old drummer Devron “Ace” Dennis, a frequent member of the house band at R House.

Luckily for us Baltimore jazz fans, Dennis did not pursue his earlier ambition of becoming a chef, or later, a carpenter—or a trombonist, which was the first instrument he tackled, at age 10. On and off from 2009, Dennis was a member of OrchKids, a program of the Baltimore Symphony Orchestra directed by percussionist Brian Prechtl,  who encouraged him to join the “Bucket Band,” an ensemble of improvised percussion instruments. OrchKids toured all over the East Coast. One memorable performance was when the group played with trumpeter Wynton Marsalis at the BSO’s 2017 gala, and received a critique from him.  It was in an OrchKids class that Dennis was introduced to jazz, by saxophonist Russell Kirk. And an important early influence was drummer Gabe Bennett, who sparked Dennis’s creativity.  From 2020 on, Dennis was not only an alum but a teacher at Orchkids, and took a lead role in preparing music for virtual online “jam session” by OrchKids members while in-person classes were suspended due to COVID.

Dennis, the would-be carpenter (or chef) started high school at Carver Vocational-Technical High School. He couldn’t study drums there, and he was going through a period “tough times” at home, so he ended up failing ninth grade. At this point, Brian Prechtl helped him get an audition at Baltimore School for the Arts (BSA).  A summer at Interlochen Arts Academy, a prestigious music camp in Michigan, helped prepare him for the audition, and Prechtl pushed for his admission.

At BSA, where he repeated ninth grade, Dennis was taught by saxophonist John Thomas, trumpeter Clarence Ward III, and bassist Eddie Hrybyk, who also helped the naïve youngster become independent and self-sufficient from the age of 15. Meanwhile, from 8th to 12th grade, Dennis attended Peabody Preparatory School, by means of a scholarship through the school’s “Tuned In” program and mentored by Daniel Trahey. He studied classical and music theory; bassist Blake Meister was one of his teachers

Ward, Hrybyk, and the Dorseys, saxophonists Ephraim and Ebban and their mother Bernadine, were also highly supportive of the young drummer’s growing career, bringing him into the hugely popular Monday night jam session at R House (previously at Terra Cafe) run by Clarence Ward III and Rufus Roundtree; Dennis eventually became a member of the house band.

Besides the R House session, Dennis has been a regular in Hrybyk’s summertime Tuesday Pop-Up Jam Sessions and  Wednesday Charm City Porch Concerts. Dennis has played at various area venues: at Keystone Korner with trumpeter Brandon Woody’s band Upendo and with the Dorseys; at the Walters Gallery with Upendo; at An die Musik with Robbie Pate and later with the Triple Threat Brass; at Todd Marcus’s erstwhile jam session at Home Slyce and at Ward’s previous jam session at Tabor Ethiopian restaurant.

Pianist Aaron Hill, who also plays in the house band at R House, has this to say about Dennis:

He has a flair like the young Tony Williams; a modern style like the world-renowned Chris Dave, and a respect for the straight-ahead jazz tradition, and he still appreciates pulling out a pair of brushes and playing on a soft ballad… He’s very mature…and also is very humble, yet when he lets out his fiery side, it’s pretty amazing–like a phoenix rising!

“Devron has a natural feel on the drum kit, and he plays with a great sense of time…he grasps new ideas very quickly, which allows him to listen and react in real time when performing. [Since high school, he has developed] more control and most importantly a sensitive touch so he doesn’t “overplay.”  Best of all, he has fun doing it.”

“Devron is an instinctive and exciting drummer, comfortable in a variety of settings from urban to pop, funk and jazz. He possess the rare gift of always being aware of the musical line and knowing just what touch the drums can provide to support and highlight the music.”

Dennis hopes to go to college, probably at Peabody Institute. He also hopes to form his own band with the Dorseys, playing originals, although he has not yet done much composing himself.

Asked to name his favorite styles of music, he answers, “Black American music – jazz, Gospel, Afro-Cuban, hip-hop, fusion” – but he loves all kinds of music—it all has its own story to tell.  And if he gets called on a gig, he’ll do it, no matter the style. As for his growing success in the jazz scene, he says, “God gave me not the gift of drumming but the gift of hustle and perseverance – a work ethic!”  I’m pretty sure that God also gave young Dennis a good deal of natural talent to work with, and the jazz community in Baltimore and beyond is grateful for it.

Liz Fixsen is a long-time jazz fan and a regular presence in the Baltimore jazz scene. She plays jazz piano and also performs occasionally as a jazz vocalist. She is a member of the board of the Baltimore Jazz Alliance; she edits and writes for the BJA newsletter.