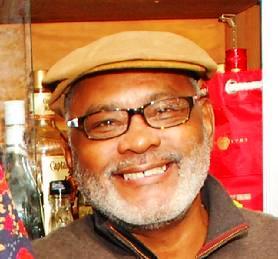 Hidden in plain sight on a half-block-square lot in the southwestern corner of the city– a stone’s throw away from the intersection of Baltimore and Hilton Streets– sits the Caton Castle, a multi-story Tudor-style structure with an angular roof and gabled windows above an “L” shaped veranda.

As it lacks a moat, it’s a stretch to call this erstwhile roadhouse  a “castle,” but Ron Scott did it anyway when he acquired the property after an auction around 1990. Since that time, Scott has made the Caton Castle a fixture on the local jazz scene, regularly presenting top-name musicians as well as outstanding local talent, like organist Greg Hatza, vibraphonist Warren Wolf and alto saxophonist Tim Green.

Who is “Sir” Ron Scott of the Caton Castle? He and I recently discussed that question at one of the venue’s cabaret tables in a room that before the pandemic pause would comfortably seat a hundred imbibing and dining connoisseurs of the music. As a regular patron, I could envision the friendly wait staff in pinball moves between linen-covered tables, gliding to and from the open bar and the swinging kitchen doors, while a glossy photo gallery of jazz royalty adorns the walls. Incidentally, I recommend the chicken wings.

Born in 1945 Baltimore, Scott was one of eight siblings in a household on Greene Street, in a downtown area since transformed by urban development, including Oriole Park at Camden Yards. With only a pedestrian interest in music, Scott still retains some vivid musical memories from his growing up years. “I had a friend who was paralyzed at age 15,” said Scott. “When that happened to him, [his pals] just gathered around him and played a lot of music at his house.”

And there were pop tunes (and some jazz) enjoyed on the jukebox at the South Baltimore restaurant owned by Scott’s uncle. “It was during a time when people hung out in restaurants,” he explained.

Other than occasional trips to the old Royal Theater–a concert by polio-stricken R&B crooner Sir Walter Jackson (1938-1983) stands out–Scott’s musical interests didn’t perk up until the mid-1970s, an eventful period all around. Scott married Gloria, his childhood acquaintance turned devoted wife until her passing in 2019. Also, Scott began his career as a maintenance worker with the Baltimore City Public Schools, from which he retired around 2005.

It so happened that a co-worker was also a John Coltrane fan who schooled Scott on some subtleties of jazz appreciation, answering Scott’s criticism of Coltrane’s avant-garde saxophone style with an admonition: “Listen to Coltrane’s ballads with Johnny Hartman.” Scott did, and discovered what jazz fans with “big ears” know: It’s possible to like and to dislike the same artist.

By the 1980s, Scott was frequenting the local jazz scene–including The Sportsman’s Lounge, The Bandstand and The Closet– but he was particularly impressed by The Haven in Northeast Baltimore. “I really liked that atmosphere,” said Scott. Of course, none of those venues has survived.

As an impresario, Scott got off on the wrong foot by presenting, he said, “music geared to the younger generation. That brings a lot of grief. At the time, in 1990, I’m 45, and people coming in here are just barely 21. I’m carding them and what not. That helped bring the changes.”

Who was the first famous jazz headliner to appear at the Caton Castle? Charles “The Mighty Burner” Earland (1941-1999). In the 1990s, the great jazz organist performed for free at a birthday event that Scott sponsored for local radio personality “Big Jim” Staton, a friend of Earland’s.

Thereafter, alto sax star Gary Bartz also played the Caton Castle with a group that included noted pianist John Hicks (1941-2006). Scott confessed: “I’m going to tell you how green I was. I didn’t have a [permanent] piano because I wasn’t getting acts like that.” He added, “I didn’t realize that the rhythm section could be just as bad [as in “bodacious”] as the person up front. You might be into Hicks. You might not be thinking about Gary Bartz.”

Since that time, the Caton Castle’s house piano has been tinkled by some very fine pianists, including Cedar Walton (1934-2013), Harold Mabern (1936-2019), Mulgrew Miller (1955-2019) and Larry Willis (1942-2019). As to Walton, a local old-school favorite from long-ago Left Bank Jazz Society performances, Scott reacted with sticker shock to his asking price and received a memorable response: “If you can’t afford me, don’t call me.”

When will outstanding live music resume at the Caton Castle? As soon as the pandemic obstacle is overcome, said Scott. Stay tuned to the “calendar” tab at www.catoncastle.com.

One thought on “Spotlighting Ron Scott of the Caton Castle”