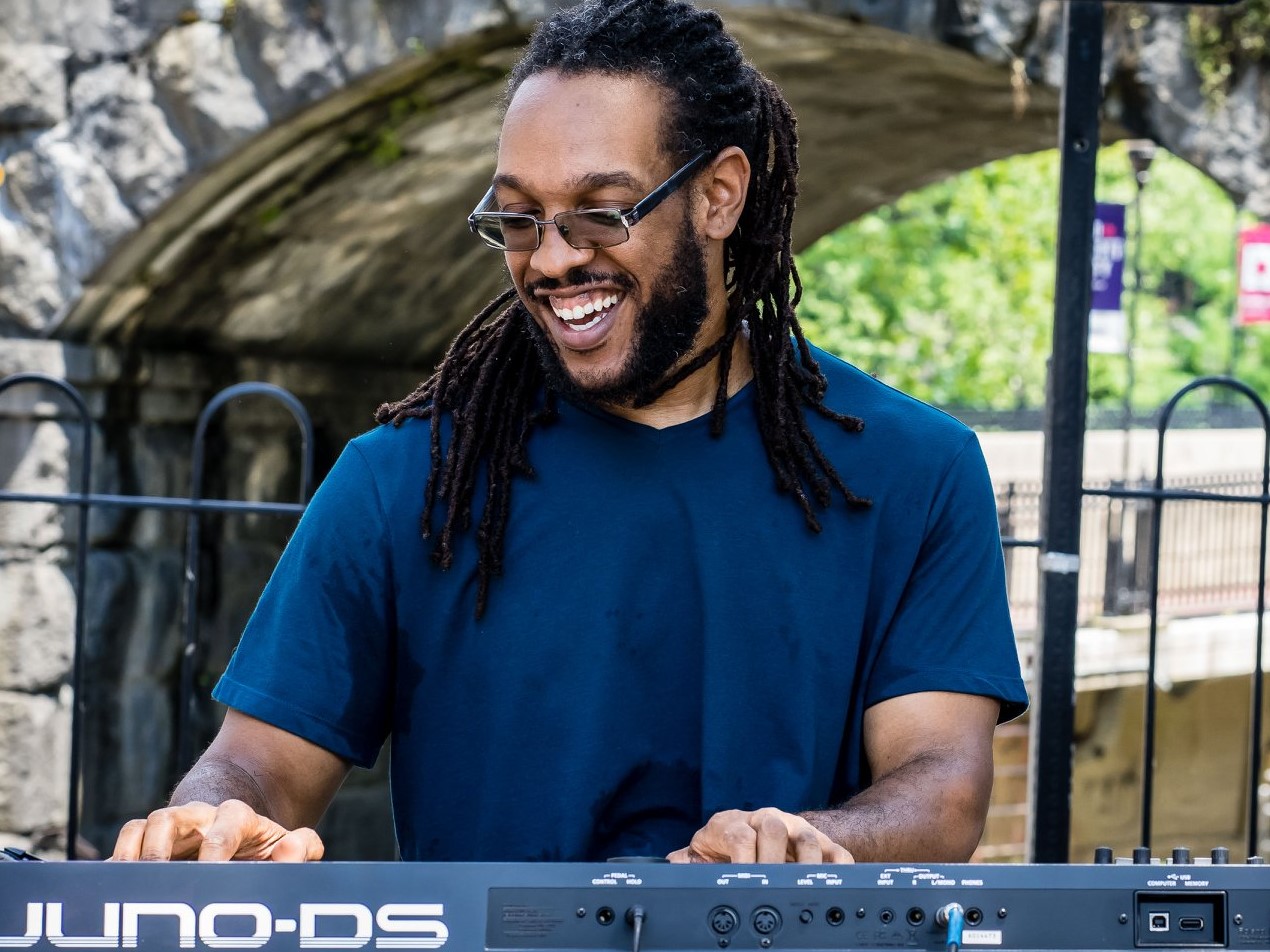 Experts who give advice on resumes say, keep it to one page. Well, not if you’re pianist Aaron Hill–whose resume is about as long as the line out the door at Keystone Korner when Ravi Coltrane played there last June. According to his bio, Hill’s various hats include pianist, composer, audio engineer, philosopher, theologian, psychotherapist, mindfulness and meditation guru, business entrepreneur – “to name a few.” And if he gets his due, the line to see Aaron Hill play at Keystone Korner (again) or anywhere else will be just as long.

But you don’t have to stand in line to hear Hill play if you come to Terra Café, where he is a member of the house band in one of Baltimore’s biggest and liveliest jam sessions, every Monday night. You don’t have to stand in line to hear him and his trio at any one of his now more than 130 free “Street Serenades” throughout the Baltimore area. There is no line to hear him on one of his kaleidoscopic array of internet sites, including Bandcamp, Spotify, YouTube, and Pandora. With his long dreads, glasses, and toothy smile, this attractive and loquacious young guy is physically and digitally ubiquitous.

His music is hard to classify – “Jazz” is just one ingredient in his potpourri of styles, reflecting his journey from hip-hop and rap, through Gospel, and finally to jazz—and beyond. Growing up in a Pentecostal church, he was steeped in that musical tradition. Having been teaching himself piano for some time, and benefiting from the tutelage of Dr. Maurice Johnson, he found himself at age 21 with a 10-hour-a-week job at a friend’s church. At that point, he went all in for music – quit his job at an auto parts store and dedicated the 30 hours a week to delve into study of music. He would go to the Enoch Pratt Library and check out CDs and books on any kind of music, and he immersed himself in whatever he found online. He also studied piano for a year at Baltimore City College, mostly classical.

Hill transitioned into jazz through a friendship with a guy named Steve, who came one day to Hill’s church looking for the job that Hill had just landed. The two connected musically—Steve was looking to transition from jazz into Gospel, and Hill was looking to go the opposite direction. Steve helped Hill move away from “smooth jazz” and open his ears to the authentic sounds “real jazz” by listening to the late John Tegler’s jazz program on WEAA.

I have heard Hill play at his “Street Serenades” in Ellicott City, at Terra Café, at Keystone Korner, and in June, at a benefit concert for Beyond the Natural, in Catonsville. When he plays the piano, Hill is completely immersed in the experience. As he leans into the instrument, it is as though he is straining to become one with it, to make it an extension of his body and his soul. There is a lush and shimmering density to his playing, like sheets of rain swirling in a storm. Hill is a musical storyteller: into that maelstrom of notes, Hill weaves speech and vocalizations, as he did in his bluesy tune that he played at that Catonsville concert, “People Make the World Go Round” (perhaps distantly inspired by the Stylistics), with an incantatory chorus of “Round and Round and Round.” His elaborate rendition of “Stella by Starlight” drew on a tapestry of genres, with some Liszt-like arpeggios, some chunky Rachmaninoff chords, and a dollop of Jerry Lee Lewis funk lurking in the corners. “Behold the Star” began as a limpid, romantic ballad with a Latin-esque groove, accented by drummer Quincy Phillips on a spiral cymbal. It then rose to a wild cacophony accompanied by Hill’s passionate vocalizations, finally winding down to let bassist Dan Klingsberg propel the tune in a throaty register.  That concert also included Hill’s song, “Believe in Love,” featuring rap-style lyrics and audience participation, with clapping and a call-and-response chorus of “we believe in love.”

“Believe in Love” could also be the theme of another Hill’s various callings, as host of an audio chat program called Clubhouse. Every Monday, Wednesday, and Friday morning from 8:30 am, he leads a session, talking, singing – and counseling. He is currently training online with the Milton Erickson Institute as a therapist. In freewheeling chat sessions that he likens to jazz improvisation, Hill lets the moment dictate the story and the flow. He says that some participants have told him that the sessions have been “life-changing” for them. Hill shares his guiding principles: “It matters the company you keep,” “You should curate your time,” “You should be yourself,” “You should be willing to take correction.”

Whether through his therapeutic improvisatory chat sessions or through his incantatory and immersive piano playing, Hill is a force to be reckoned with. Learn more about Hill’s many other hats at aaronhilltv.com or on his Facebook page.

–by Liz Fixsen.  Liz is a dedicated fan of jazz in Baltimore, for many years a familiar presence at the clubs and jam sessions, a member of the BJA board, and a writer and editor for the BJA newsletter A jazz vocalist and pianist, she occasionally performs at Baltimore-area venues and for private events.