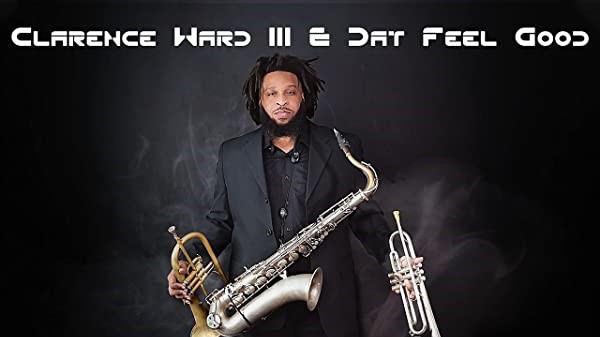 Clarence Ward III and his band Dat Feel Good have released a live recording, titled   Live At Blue House, which captures his group in fine form on eight tracks.  It is an inspiring program of music, coming from a deep place within the artist.  The journey of how Ward III arrived at Live At Blue House is as at least as valuable as the music itself.

According to Ward, this recording documents a live-stream concert that almost didn’t happen. In March of 2020, Ward experienced the loss of his father, and soon after, the country and the world fell headfirst into the pandemic.  This prolific artist on both saxophone and trumpet suddenly found himself unable to play.  The layoff from performing in-person live shows with a band, an experience shared by all artists throughout most of 2020, made a bad situation worse.  Eventually Ward decided he needed to document his music.  “I’m now in the head space to take things to the next level for my family, Baltimore, and myself,” Ward says.

From the opening bars of the opening track “Dream Traveler” it becomes obvious that Ward’s voice is one of the more relevant musical voices on the scene today.  The song sets up a moody – dare I say dreamy? – atmosphere before drummer Quincy Phillips lays down a wonderful samba groove which contains most of the improvisational material.  Keyboardist Aaron Hill starts the solo section here, and the interplay between him, Phillips, and bassist Mikel Combs lets you know that the Dat Feel Good band is as good as their name.

Ward composed that song and most of the others  on this project.  The next track is the popular jazz standard “Misty,” but Ward puts such hip vibe on it, it sounds like a brand new song.  If you enjoy Robert Glasper, you’ll love this track.  Ward’s trumpet embellishes the melodic content just enough to make his novel interpretation work as both a standard and as something modern.

In his bio, Ward states that he began studying with the legendary educator from Baltimore, Charles Funn.  The tune “Funn’s Funk” is a lot like the man himself–fun, funky, and ready to make you smile because he’s already got a smile on his face.  This track is where the band really starts to fly high.  Ward plays both trumpet and saxophone here.  About four minutes in, Ward and Phillips go to battle without the bass and keyboard; each statement by the saxophone is answered in kind by the drummer.  The jury is still out on who got whom.  Aaron Hill then moves to center stage on organ.  His solo is electric–twists and turns all punctuated by rhythmic interjections by bassist Combs.  You’ll be out of breath until you realize Ward takes another blistering solo on trumpet for the remainder of the song.  This track is 11 minutes of the blues on steroids, starting in the Black Gospel tradition and ending up in outer space!

“Heartfelt” is exactly what you’d imagine.  Phillips is probably the perfect drummer for this project as he has the ability to swing as hard as any Bebop drummer, yet has the subtlety for an R&B backbeat as if that’s all he plays.  Same can be said for Hill, who moves adeptly and effortlessly in and out of acoustic piano and keyboard sounds. This gives the Dat Feel Good band tremendous versatility.  Ward can place his trumpet on top of a groove, albeit swing or pocket, and it all sounds musical.

“Thanks for the Tears” is a nice Latin-ish vibe in three or six.  Ward’s trumpet voice here evokes an almost Roy Hargrove-type sound.  What really works here is Ward is playing along with the Dat Feel Good band, not against them.  Some soloists, especially when they have an expansive vocabulary, create vehicles where the most memorable aspect is their solo.  Sometimes that means the soloist is not particularly interested in or impacted by the foundation the band is laying down.  But this tune is definitely a band effort.  It’s Ward’s leadership, but the band is cohesive, and they play together.  By the time the groove shifts to a faster Latin in four, at which point the piano takes the lead, the song continues to increase in intensity.  This is a really great avenue to show off the versatility of the band.

The rest of the tracks, such as the more subdued “3AM,” the organ rollicking “When the Saints Go Marching In,” and the–dare I say, urban contemporary, Stevie Wonder-ish–“Feel Good” all announce that Clarence Ward III and Dat Feel Good’s Live at Blue House is a collection of music you need to experience.  This recording is the perfect soundtrack for a long drive around Baltimore, the city Ward loves, right about when the sun goes down.  But make no mistake: this live document is not to be categorized as background music.  It demands your full attention–every track, every solo, from start to finish.  Fortunately for us Clarence Ward III found his voice again.  Without it, Baltimore would just not be as hip as it is now.

And as far as taking his music to the next level?   Mission Accomplished.

The album is available digitally on Amazon, Spotify, YouTube, AppleMusic, and iTunes. Ward and Hill can be heard at their jam session every Monday at Terra Café, 25th & St. Paul, in Baltimore.

Eric Byrd is a jazz pianist and leader of the Eric Byrd Trio (with bassist Bhagwan Khalsa and drummer Alphonso Young, Jr.). The trio has performed extensively throughout the region and across the globe with some of the most recognized artists of jazz.  They have been sponsored by the United States Embassy as Kennedy Center/U.S. State Department Jazz Ambassadors, touring and performing worldwide. Byrd is returning as a writer for the Baltimore Jazz Alliance newsletter.