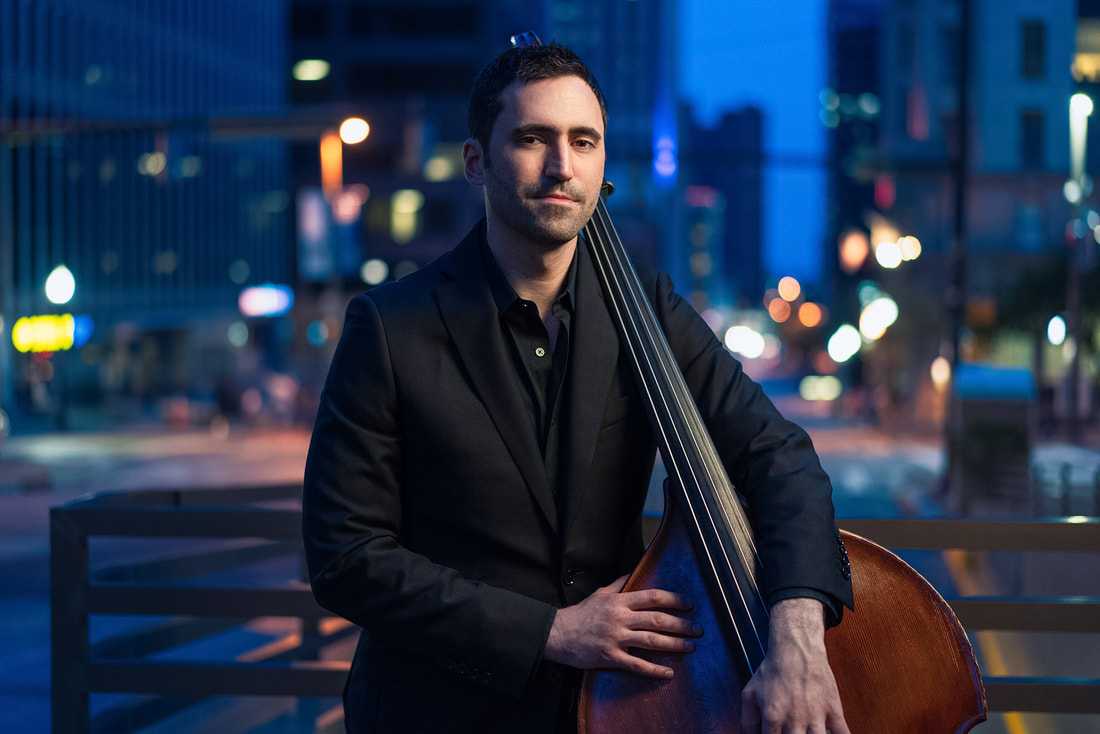 Known for his wit and versatility, Philadelphia-born bassist Blake Meister has become a widely recognized name in Baltimore’s jazz scene and beyond. Even in the toughest of times, he remains one of the busiest (and most positive) musicians around. Whether attending Terra Cafe’s Monday night jam session or performing on stage at all the local haunts and venues, you can be sure that he is always on the move and at the ready.

He has a knack for evoking bursts of laughter just as often as he can leave people silenced in awe while taking a solo. Many have described him as a very “go-with-the-flow” person, in both his playing and his personality.

It is apparent that he works just as hard as he swings, given his track record in recent years. Just look at any jazz calendar or performance description, and you will likely spot his name on the bill. He received three Individual Artist Awards from the Maryland State Arts Council (for composition in 2012 and 2018 and for performance in 2015), and his debut album Septagon was named CapitalBop’s Best Album of 2012. Well-versed in the post-bop patois, he regularly performs in other styles too, including Gypsy jazz (he is regularly recruited by Hot Club of Baltimore bandleader Michael Joseph Harris), Latin jazz, French waltz, and, occasionally, funk and pop.

During our interview, Meister reminisced on his college years and reflected on his mentors, bassist Paul Johnson and saxophonist Gary Thomas, who were closely involved with his musical development. Having played only electric bass, he arrived at Peabody Conservatory with an upright bass gifted by his parents but with no experience on it. Meister says, “I actually started studying classical music to learn the upright… Fortunately [Paul Johnson] was willing to teach me, so I kind of fell backwards into it that way. He got me on the right path, and really went out of his way for me, over and over again.”

The gig grind is a rite of passage for all musicians. One can only grow so much playing within the comfort of one’s home, and unless a player gets out to perform, it will be a slow boat to his or her full potential. Immediately recognizing this fact, Meister took to the streets attending as many jam sessions and gigs as he could manage. He took part in a regular Monday night jam session at An die Musik, as well as playing with several featured acts there. These experiences further steeped him in the jazz tradition.

Towards the latter half of his bachelor’s studies, he was performing at local venues, bars, and clubs on a near nightly basis. Upon completion of his studies at Peabody, he was approached by a friend to audition for the classical music master’s program at Catholic University in Washington, D.C. Unsurprisingly, he earned a spot. He studied under National Symphony bassist Ira Gold and continued to play with a seemingly never-ending assortment of ensembles all over the region.

It is indeed a challenge to juggle the pursuit of higher education and work as a full-time performing musician. In between studying and performing, he also taught as a piano teacher at Peabody Conservatory and Preparatory, instructing also in bass, music theory, and ear training.

Gary Thomas was chairman of the Peabody jazz department while Meister was involved with the school. “He’s an incredible educator,” says Meister. “He has a way of getting right to the core of what students need to do. He helped me fix a lot of things in my playing. When I was teaching at Peabody, we would get breakfast before our morning classes. There was a lot of guidance there, too. He’s a unique player. Hopefully some of his ideas have rubbed off on me.”Meister credits his father, a blues DJ, for introducing him to a wide array of music as he was growing up. While he consumed hefty amounts of blues, folk, country, and hip-hop, the young bassist always gave considerable attention to jazz, listening to Miles Davis and John Coltrane among others.

Some musicians can pinpoint a precise recording, performance, or experience that inspired them to become full-time musicians. For Meister, there was no watershed moment. He states that he has always just played music and will continue to do so, adding “I take every day as it comes.”

When asked if he had any advice to offer for young, budding musicians, Meister had this to say: “Start practicing now. It’s like investing. [Not everyone] has [money] to put away, usually… but what you do have is time. If you could invest five hours a day when you’re fifteen years old, it’s going to pay very big dividends. It’ll make your life a lot easier. And if you choose to pursue [music], doors are going to open up for you in a different kind of way.”

While he is very much at home on the upright bass, Meister also performs jazz on piano. He is also available for private lessons. Keep up with all of his performances and releases on Facebook, Instagram or his website  https://www.blakemeister.com/.

— Kristoffer Belgica is a Texas native who primarily plays rhythm guitar for local gypsy jazz ensembles Hot Club of Baltimore, and the DC-based group Swing 5. He gave seven years of service in the U.S. Air Force and now devotes his time learning from and contributing to the Baltimore jazz community. He has written several articles for the BJA newsletter.