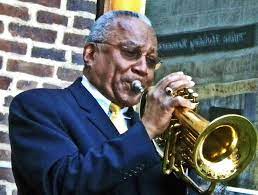 On August 8, 2021, the second installment in a series of three FREE Sunday afternoon jazz concerts under the outdoors pavilion at the Baltimore Museum of Industry near Federal Hill presented an encore performance by the John Lamkin Favorites Jazz Quintet, featuring John R. Lamkin, II on trumpet and flugelhorn, Bob Butta on electric keyboard, Jesse Moody on drums, Blake Meister on acoustic bass, and Michael Hairston on tenor and soprano sax.

This free concert, sponsored partly by the Maryland State Arts Council, put the lie to the old saw that you get what you pay for. Sometimes you get a lot more. Surely you’d hear no dissent from the solitary duckling– a refugee from the Inner Harbor– that aimlessly waddled in front of the sizzling band.

The group’s repertoire included several of Lamkin’s original compositions in recognition of  Baltimore’s rich jazz heritage. “Hittin’ At The Haven,” for instance, is a tribute to the “good time had by all” at the old New Haven Lounge, which used to be located in the Northwood Shopping Center near Morgan State University. Both the lounge and the shopping center have been demolished to facilitate expansion of the university.

History zigzags. The shopping center had been a 1960s hotbed of protest against racial segregation. Ironically, the lounge’s parking lot was subsequently the scene of a horrific instance of black-on-black violence in 2008, when Ken Harris, a prominent black Baltimore City councilman, was murdered in a robbery attempt. Three black men were convicted of the crime. Black or white, there are no groups with categorically clean hands.

“Hittin’ At The Haven” is a Horace Silver-style swinging post-bop tune with a two-horn introduction preceding a trumpet excursion in a slurred tone and with a shifting pace that created ascending tension through a deft use of hesitation. The tenor sax countered in a full-toned up-tempo shower of melodic notes, varying in tone and duration with creative ornamental conceits, some reminiscent of tenor sax great Joe Henderson’s trademark warbling licks.

Butta’s bubbly keyboard comping emerged from the background with a solo sprint offset by Moody’s tapping cymbals and Meister’s imperturbable bass line to create a vibe suggestive of Rumba. Butta kept wailing, even as the harbor winds played havoc with his sheet music.

Here, and even more so on “Transitions,” another Lamkin original, Meister’s bass solo’s thematic interjections created an “Ah-ha” moment for me. You see, in Meister’s hands the acoustic bass becomes a melody instrument, and not just a rhythm instrument. Meister’s bass fiddle can take on certain of the flexible, even voice-like qualities of  an electric bass guitar. Where had I heard this style before? Jaco Pastorius (1951-1987), the beyond-categorizing bass guitarist with “Weather Report,” a 1970s jazz/rock fusion group. Pastorius applied acoustic bass phrasing to a bass guitar sensibility. Ah-ha! Meister does something like that in reverse order.

“Da Market” is a middle-tempo blues number that was made for dancing, according to Lamkin, who composed it in tribute to denizens of downtown’s Lexington Market. “D Avenue” is a similar composition by Lamkin. Its more “funky” orientation provided a vehicle for extended tenor sax riffs with staccato embellishments, as well as an energetic drum solo that exploited a calculated quiet to accentuate a percussive explosion.

Note that “D Avenue” is a tribute to the jazz legacy of Pennsylvania Avenue’s bygone black entertainment district. In that vein, let us acknowledge the recent death at age 78 of James Earl Reid, the black sculptor who created the Billie Holiday statue erected near Pennsylvania and Lafayette Avenues in West Baltimore, a stone’s throw away from where the storied Royal Theater once stood.

“Ode to George Floyd (I Can’t Breathe)” is a brooding dirge that is Lamkin’s tribute to the personification of recent racial unrest, a repetition of Baltimore’s Freddie Gray riots in 2015. This tune set a mood of poignant sadness. Both the keyboard and the tenor sax tastefully rose to the somber occasion.

Finally, “Somumin 3 (You Dig!)” from the group’s Transitions CD (available on Amazon) is a fluffy jazz/waltz composition by Lamkin that relieved the “George Floyd” angst of the tuned-in audience that half-filled the pavilion. Music is magical that way.

Don’t take my word for it. Check out the third and final installment of the John Lamkin Favorites Jazz Quintet at the Baltimore Museum of Industry on Sunday, September 19, 2021, from 4:00 to 5:30 p.m.

Incidentally, the museum celebrates Maryland’s industrial legacy through exhibitions, collections and educational programs at its Key Highway location and is open to the public on weekends.

The John Lamkin Favorites Jazz Quintet was so named by Dr. John Lamkin, II, retired music educator at the University of Maryland, Eastern Shore, because of the musicians’ mutual affinity for the “post-bop” jazz tradition. Fans of the music are also Dr. Lamkin’s “favorites.”