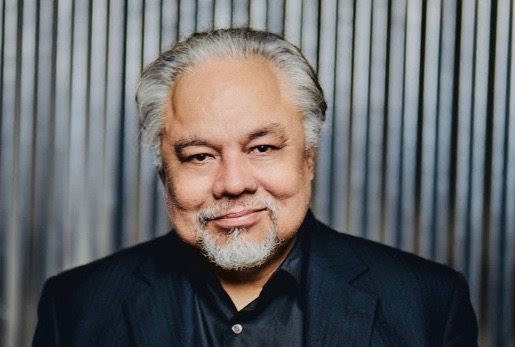 Spend some time talking with Baltimore-based keyboardist Tom Reyes and you will be struck by the passion he has for both for his wife, his family, and creating music, in that order. Being a band leader, musical director, and sideman has allowed him to express his musical passion in the greater Baltimore area for over 50 years.

The son of a musical father, whom he describes as “an interesting guy,” the senior Reyes performed on guitar and vocals with a Hawaiian band during the radio heyday of the 1930s and 40s. Tom took up keyboards at age 14 when his best friends needed a keyboard player for their band. That band didn’t last long, but Tom Reyes did. First influenced by artists like Santana and Jon Lord of Deep Purple, he became interested in the Hammond Organ, soon followed by an interest in synthesizers and everything possible with the rapidly expanding realm of keyboardists in the rock and roll world. Reading the keyboard magazines of the time, he noticed that all the rock organists kept referring to “this guy named Jimmy Smith.” Being the inquisitive type, he went and bought a Jimmy Smith album, and that did it for him. Not too long after that, he discovered Oscar Peterson, and “he flipped out.” Reyes says, “When I heard Oscar Peterson, I thought all piano players played like that and there was no way I could do that, so I might as well sell my gear.” He soon found out there were many other players out there all with their own style, and that made it all even more interesting to the budding young pianist.

By age 16, Reyes was playing rock and roll clubs around Baltimore with his brothers in The Reyes Brothers band. This continued all through the 1970s and ‘80s, both with his brothers and with the band Orange Wedge. “We played clubs, weddings, social gatherings, and bull roasts–wherever they’d have us,” says Reyes. In the early ‘70s, he heard Chick Corea’s band Return to Forever on their first tour. He describes that as a highly influential experience, especially hearing Chick Corea with the band. Reyes attended many more concerts during that time, including Mahavishnu Orchestra and others. Hearing jazz-influenced music performed in rock venues showed what was possible at that time. When Reyes describes these experiences, there’s no doubt it had a lasting effect on him.

As the club scene started to die off, Reyes started playing more and more jazz in solo and band settings. Though originally an organist and synthesizer player, he’d been playing piano, and that led him to more keyboard greats. Chick Corea, Bill Evans, Keith Jarrett, and others led him to the catalog of jazz standards that has been the main focus of Tom’s career for many years.

When asked about the standards and what in that vast genre inspires him, Reyes says: “There’s always something to learn, always something new.” It’s the “something new” that comes across in discussion with him and hearing him perform. The joy of improvisation and musical discovery seems to push Reyes to find new ways to express the music he loves so much. No matter if he’s playing jazz, free improvisation, blues, R & B, or rock, that joy is plentiful and evident.

The other thing that comes up in conversation with Reyes is friendship. The people he shares the stage with are personal friends. It doesn’t matter if they’re old or new, that idea of performing with friends is something he treasures and is of primary importance. Long-time collaborator Ed Kernan has been playing bass with Reyes for over 22 years. In Reyes’s regular band, along with Ed Kernan, are vocalist Rae Bernard, drummer Darrell Dunning, and flutist Carl Carrington. All are long-time friends and band mates. Due to the pandemic, musicians have had to adjust. No venues are hiring bands, so solo and duo performances are the order of the day. Lately Reyes has been working with bassist Jim Dedrick performing duets whenever possible.

Reyes has never put out a recording, until now. Plans are coming together to record an album this year with Jim Dedrick to perform original music sprinkled with some standards—and doubtlessly, with much joy.

Tom Reyes can be found on his Facebook page ‘What is that Tom Reyes Up to?’ and MDparty.com

John Dahlman has been a bassist in the greater Baltimore/ Washington area since the late 1970s. He has lived, performed, and taught in a number of cities and countries including New York, Nashville, Washington, D.C., Jamaica, and Scotland.   He now lives outside Baltimore, MD.  John can be found performing all through the Mid-Atlantic region with a wide variety of groups or as a solo artist.