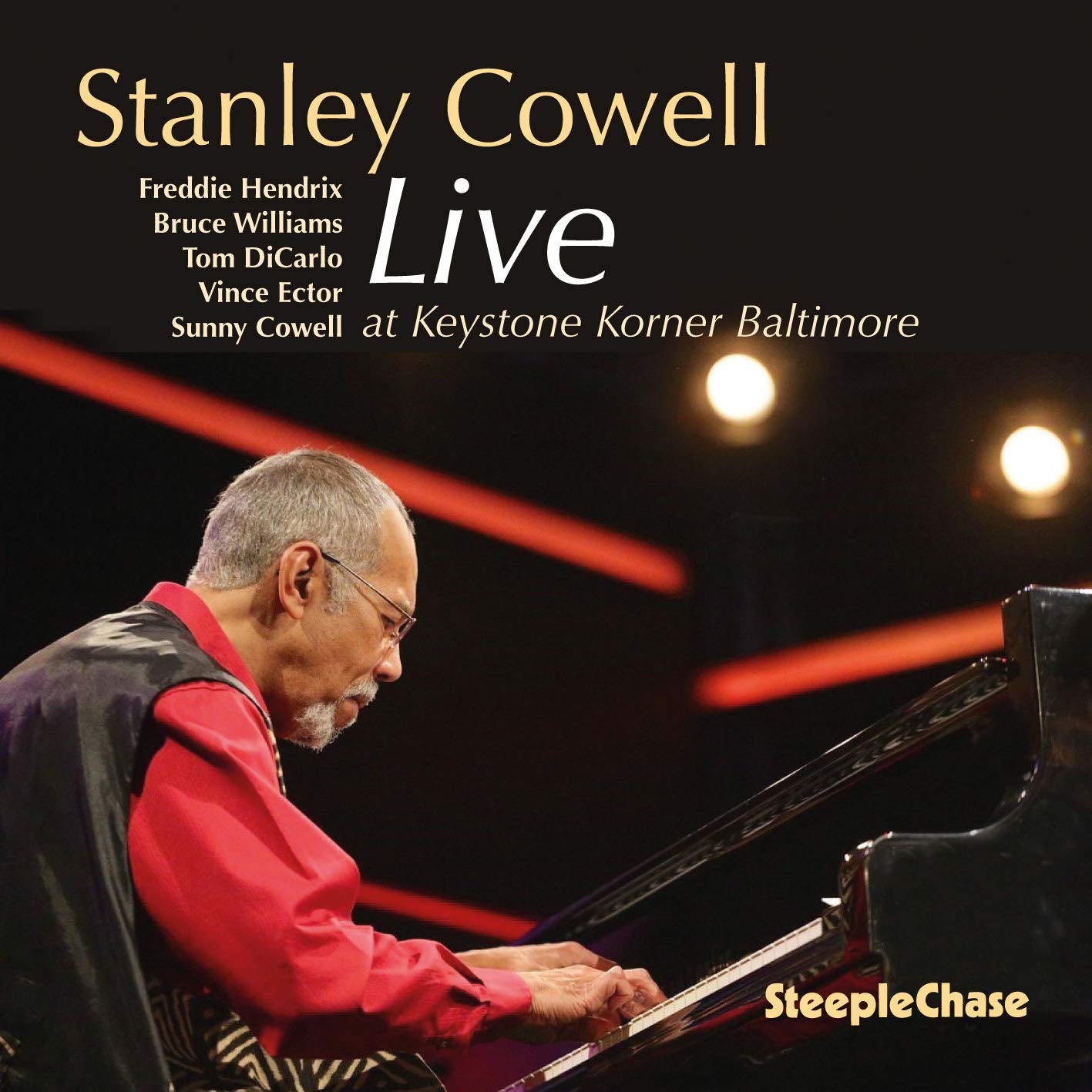 For a jazz master whose modus operandi was versatility, it seems befitting that his final recorded work would be Live at Keystone Korner Baltimore. To appreciate this demonstration on how to be the jack-of-all-trades- jazzman, it bears examining this album with slightly more than what meets the ear.

Stanley Cowell had a lot to express that night in October, 2019 as he aided a fellow jazz impresario, Todd Barkan, in christening his famed jazz venue, Keystone Korner in its revival in downtown Charm City. A formidable platoon of Freddie Hendrix (trumpet), Bruce Williams (alto), Tom Dicarlo (bass), Vince Ector (drums)—all of whom with previous ties to Cowell himself—were summoned to duty to bring another quality jazz club to a city rich with jazz, both past and present.

Intent on using every tool in his box, Cowell fires up the set with his flashy piano riff from the opening bars of “Cal Massey,” a signature composition he first introduced on a trio date in 1989. Decantering this selection some thirty years later in 2019 proved to be the climax of a good aging process.

With Hendrix and Williams layered out in robust intervals on top of Cowell stating the theme, the catchy opening number tugs you in even

harder. Not to mention the ensuing horn solos, each of them virtuosic in their own right, providing the “kaleidoscopic view of jazz” (as WBGO radio put it) that Cowell liked to execute his craft with.

At age six, Stanley Cowell witnessed a family friend named Art Tatum play a hot stride rendition of the 20’s showtune, “You Took Advantage of Me,” which immediately sparked his own interest in playing jazz piano. To rag n’ stride was of no trouble to Cowell either—certainly not in the hearty Chesapeake tribute he pays to Eubie Blake (a Baltimore native)—in a spicy rendition of “Charleston Rag.” The quintet cooks it up so well, you’re not sure whether you’re in Carolina, Georgia, or Louisiana—but the pitmasters sure know what they’re doing.

“Montage for Toledo,” an homage to Cowell’s birthplace in Ohio, is a richly dark, beautiful jazz waltz to the tune of Cowell’s late-60s recordings with Bobby Hutcherson (“Effi”). While one familiar with the original tune might miss Hutcherson’s vibes and James Spaulding’s flute, it’s hard to get caught up in such technical matters when all the maestro has to do is carry on with his next number.

Another chapter of his expertise is delivered smoothly in the form of perhaps Cowell’s best-known composition, “Equipoise,” a song he originally penned for Max Roach’s 1968 album, Members, Don’t Git Weary. When Roach required some novel material in the form of post-bop’s and fusion’s widening of the jazz playing field, his man was Stanley Cowell, who credited his time with Roach as “the start of everything” for him.

It’s also hard to ignore the meaning of the word itself: “equipoise”—a balance of forces or interests—an apt description of Cowell’s approach to music, if not of the man himself.  His own daughter Sunny drives it home with her soulful voice soaring over the lush backdrop of the horns’ lower registers, along with her father’s gentle and deliberate movements on the piano.

Other notable tracks include “It’s Time,” which hails from the Max Roach Chorus and Orchestra neck of the woods and translates into a modern jazz joyride, and “Banana Pudding,” where Cowell shows you just how much he is capable of, both as a soloist and as an ensemble pianist who knows instinctively where best and how to play his notes.

For a seasoned jazzman who left the stage during his most profitable years due to an aversion to cigarette smoke, only to make a fruitful comeback at the end of his career, Live at Keystone Korner Baltimore is an apt manifestation of the many things Stanley Cowell brought to the bandstand.

Stanley Cowell died earlier this winter in Delaware. He was 79.

David Joseph grew up in Brooklyn, New York where he became an avid listener of jazz on WBGO radio.  Once while visiting his uncle in North Jersey, David was invited into the home of pianist Bill Charlap, who lived across the street at the time. Per David’s request, Charlap performed his arrangement of “All Through the Night,” which he’d recently recorded with his trio. That cemented David’s ongoing interest in jazz, as well as his desire to write about the artform which is most dear to him.