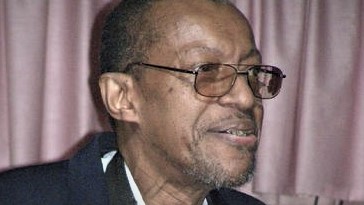 On January 13 of 2021, saxophonist Harold Adams, passed away at age 79. He was a well-known figure in the Baltimore jazz scene, especially at the venerable Caton Castle. We share remembrances by several fans and fellow musicians who knew Adams.

Following are excerpts of a WEAA Jazz Appreciation Month spotlight written by Bob Jacobson in 2011:

Harold Adams began saxophone lessons at age nine, inspired by his East Baltimore neighbor, alto saxophonist Lee Jeffers. He was playing jazz gigs by age seventeen. Upon graduation from Morgan State in 1964, he formed The Soul Brothers with fellow students from Morgan. At the Royal Theatre, the band backed up Lloyd Price, Major Lance, and The Supremes, and also played Bohemian Caverns in Washington, D.C.

Harold spent most of his working life as an administrator in developmental disabilities. But during a one-year hiatus in the early ’70s, Adams toured the United States with singer Luther Ingram. Their 1972 festival appearance in L.A. is documented in the film Wattstax. Three years later Adams began over two decades with the popular Baltimore band Moon August, including jazz festival performances in Japan and Italy as Baltimore’s cultural ambassadors. In 1999, Harold was back in the movies, this time in Barry Levinson’s Liberty Heights. For many years,  Adams led bands at the Caton Castle.

Greg Hatza, jazz organist, leader of the Moon August band, remembers meeting Adams in 1964 in Reading, PA, at a performance by Soul Brothers honoring football player Lenny Moore. In Baltimore, Hatza and Adams played many a gig together, including long-standing engagements at The Bird Cage and The Love Nest. Hatza was also a rotational pianist at The Caton Castle shows, which Adams hosted every Saturday for years. Adams and Major Boyd were the front line to Moon August for over 25 years. Adams was instrumental in getting Moon August to travel to Kawasaki Japan with then Mayor Schmoke for a sister city cultural exchange. Some of the last gigs Hatza played with Harold was with his group called Jazz in the Sanctuary, a group that performed jazz gospel music in the tri-state area.

Hatza writes: Harold was always an up-beat, happy person to me. He had a great on-stage personality. Being an MC and band leader seemed very natural to him…If he wasn’t performing, he would still enjoy hanging out and visiting the clubs. If there was a gig to be found, he would find it! Great ambassador for jazz in Baltimore. Knew a lot of influential people.  Also a connoisseur of good food. He was a great cook, and I heard from friends that during his college years, he was a chef in a restaurant in Ogunquit, Maine. Harold was one of Baltimore’s greats in jazz and a good friend.

Bassist Amy Shook also shared remembrances of Adams, with whom she also played on many occasions at Caton Castle. “So many wonderful Saturdays!” She writes:

Usually Robert Shahid was on drums, and the piano chair rotated between Bob Butta, Greg Hatza, Eric Byrd, etc. But no matter who was in the band, Harold always led with so much SOUL, and it was guaranteed to be a swingin’ gig. I couldn’t wait for the gig every week! I remember him embracing me as both a friend and as a musician right from the first note. He was always so warm and welcoming. I always felt like he was so happy we were playing together, I know I certainly was, and I will always be grateful to him for the first call to come play, and for all the subsequent calls. I have so many wonderful musical memories…I will cherish all the music.

Leslie Imes, who has been affiliated with Caton Castle for years, shares her reminiscences.  In 2005, she was looking for some live music after a four-year assignment in a war-torn Caribbean Island. At that time, not much was happening in Baltimore, jazz-wise. But a friend recommended Caton Castle. “It was the last jazz club left in Baltimore,” Imes writes, “Done the old way, up close and personal.”  At the first show she attended, Harold Adams’s band was playing. And the music was just what she needed to soothe her soul after her harrowing experiences in a war zone. “His sound was so mellow and clear.  Unrehearsed and unscripted, when he played ‘Old Folks,’ you could almost hear the words to the solo, and I was jettisoned back in time.  I almost cried, it was so beautiful.” She was so impressed that she began inviting friends to hear Adams at Caton Castle, creating a following. She writes:

Week after week, Harold’s interpretations of some of the greatest music ever written was meticulously on display.  It didn’t matter if it was ‘Birks Works’ (Dizzy Gillespie) or ‘The Nearness of You’ (Hoagy Carmichael).  He was also one of those special people who didn’t mind sharing the stage with fellow musicians and even welcomed it.  He and Major Boyd were more than bliss together.  Harold’s heart was always joyful and welcoming to newcomers and students, as well as the old hands

Rosa Pryor-Trusty, writer for the Baltimore Times, also had a warm admiration for Adams: Harold Adams has always been very special to me. I think he was one of most seasoned professional saxophonists I have ever met, and believe me I know many of of them… He always had a kind and gentle soul. He was the kind of musician that any top professional band would have enjoyed working with. May he continue to rest in peace in heaven with his musician family, such as Mickey Fields, Johnny Polite, Dave Ross, Arnold Sterling, Andi Rock, Chico Johnson, Fuzzy Kane, Jimmy Wells, Vernon Wolst and Whit Williams, just to name a very few.

Adams’s obituary at March Funeral Home reads: “Harold understood the profound influence of music and played for crowds of all ages… He showed the same reverence for every performance. Harold enriched the musical landscape, and his legacy will live on for generations to come.”

If there IS a jazz band in heaven, Harold Adams will no doubt be there, blowing with all those many friends for an angelic host of music lovers.

Liz Fixsen is a jazz pianist and vocalist and a long-time fan of jazz in Baltimore. She has written numerous articles for the Baltimore Jazz Alliance newsletter.