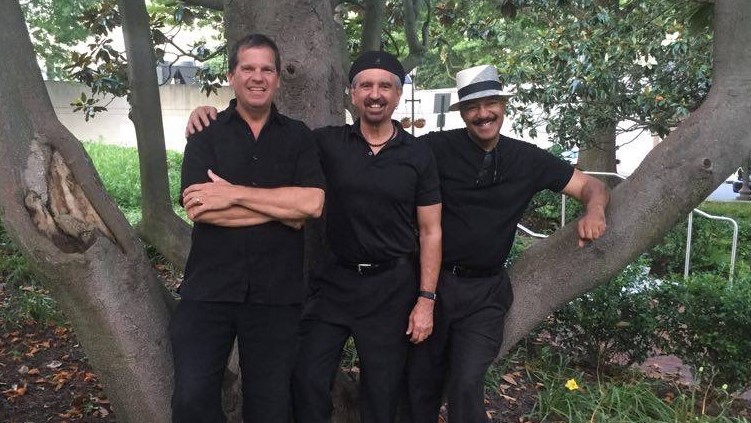 Some things just feel good.  They just feel right: stepping out with your boo on a Saturday night, enjoying good home cooking Big Mama made for you because you were stopping by after church Sunday afternoon, or having a cold one listening to unpretentious music made by three musicians who know how to put it in the pocket.

Guitarist Brian Kooken’s Bk Trio’s recording Hit It is all of these things and more.  It just feels right.

Kooken’s guitar takes center stage on this recording as you would expect, but don’t get it twisted.  All the members of this trio (who have often performed together at Baltimore’s Caton Castle) could lead and frequently do in other musical contexts.  Greg Hatza on Hammond B3 Organ is simply as good as it gets.  Surely, he is a local legend, but that doesn’t capture everything Hatza has brought to the music.  He is equally adept at taking charge on a track like “It’s Monday and I’ve Got the Blues” and settling into sideman role on other tracks.  Drummer Robert Shahid – WEAA’s Morgan State University’s own host of “Masterclass” – instructs listeners on this project like any good MSU professor would: subtly supporting, gently prodding us on this journey with ferocious, musical interjections that would make anyone take notice.  This is a trio of equals which makes this a standout recording.

The title track, “Hit It” comes out swinging.  It gives you a nice glimpse on what you’re about to experience for the rest of the recording.  BK doesn’t spend a lot of time with jabs or suggestion; his solo goes right to throwing haymakers, huge right hand blows to remind you to keep your hands and feet inside the car for this entire ride.  Hatza takes you even higher with a Jimmy Smith-type blues solo to remind us all that he did his homework.  His playing especially reminds you of the tradition he came from and where he plans on going.

“Always Looking Up” is a really nice straight eighth note, quasi-Latin 12 bar blues.  Bk starts the solo section with some soulful jazz lines.  He can play the blues, no doubt.  (His bio indicates he spent significant time on the road with Marva Wright, Blues Queen of New Orleans).  But he can also play jazz.  It is rare to find a musician that can swing this well and play the blues this authentically.  It is a pleasure to hear both done masterfully.

Oddly enough “Brazilian Blues” comes off as tongue-in-cheek to my ears: it’s neither a samba nor a traditional 12 bar.  But it is a lovely laid-back vibe showing off the melodicism of all three members.  Yes, they all have chops for days, but on this and other tracks, they don’t mind letting the music speak for itself.  There are times in life where screaming is necessary.  There are other times when a whisper in the ear to someone you want to get closer to is more effective.  This track is a beautiful whisper without being weak minded.

Another stand-out track is “In That Funk Again.” It can be challenging to make music sound interesting when the chord structure is built on just one chord or only a few.  Challenge Accepted!  BK weaves melodic lines in and around these sparse chord changes to keep forward momentum.   Shahid’s groove is so consistent, so funky, it reminds you of a James Brown track you can’t quite remember the title for.  It’s familiar yet unique for this song.  Throw in a blistering B3 treatment from Hatza to take the music from simmering to the verge of boiling, and you’ve got all the ingredients for a perfectly funky stew.

All eight songs are original compositions by BK.  He’s not only a masterful guitarist but he can create artistic frameworks where his trio can be free.  Hit It should be on heavy rotation in your listening library.  It is soulful and it is funky.  It is jazz and it is blues.  It is led by Brian Kooken but also gives organist Greg Hatza and drummer Robert Shahid the opportunity to drive.  BB King was right when he said, “The Blues is the happiest music I know.”  Hit It will make you happy.

Why?  It just feels right.

The album can be purchased either digitally or on CD at https://briankooken.space/music.

Eric Byrd is a jazz pianist and leader of the Eric Byrd Trio (with bassist Bhagwan Khalsa and drummer Alphonso Young, Jr.). The trio has performed extensively throughout the region and across the globe with some of the most recognized artists of jazz.  Byrd, Khalsa, and Young hold advanced degrees in Music History, African American Music, and Jazz Performance. They frequently give clinics on music history, jazz, and the relationship between the spirituals/gospel, blues, and jazz. They have been sponsored by the United States Embassy as Kennedy Center/U.S. State Department Jazz Ambassadors, touring and performing worldwide. Byrd is returning as a writer for the Baltimore Jazz Alliance newsletter.