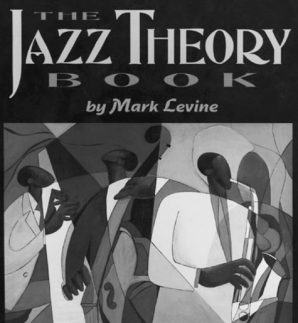 Back in the 1970s, as a young jazz enthusiast,  I remember listening to pianist Victor Feldman playing in a club in Los Angeles  and wondering, “What is he doing??” meaning, what is happening when he is improvising a solo? Where does he get the notes?

Decades later, I learned the answer when I began to study jazz myself and took a theory course at Towson University (along with reading Mark Levine’s famous The Jazz Theory Book). And without having studied theory, I would not have gained even the limited improvisational skills that I possess.

There may be those reading this who, like me, love the energy, the expressiveness, and the creativity of jazz but who ask themselves the same question I asked at that Victor Feldman concert. “Where are they getting the notes?”

The simple answer is that they are following the chord progression of the song. Certain chords in a sequence imply a scale. For example, D-minor 7th and G7th both imply a “C” scale. And from that scale, an improvisor may choose notes to create an alternate melody. Of course the reality is more complex; there are alterations to the chords (such as flat ninths, sharp elevenths, and flat thirteenths); there are passing tones and voice leading– and there is playing “outside” the implied scales of the harmony.

Bassist (and BJA President) Ian Rashkin has these observations on theory: “Essentially it is the study of context and expectations…the theory tells me what the listener expects,” which allows him to make the appropriate moves. “And that ends up,” Ian continues, “being one of the great things about the jazz vocabulary, that the variants of expectations have evolved so far, and become so broad, that every note sets up a whole array of expectations, and yet still leaves room for surprises.” In Ian’s view, “Theory is not a set of arbitrary rules, but an attempt to define expectations and allow a common framework for conforming to or rebelling against as desired.”

It is somewhat of a myth that early jazz musicians were not schooled in theory. Even great jazz figures like Thelonious Monk, who is described as “mostly self-taught,” would have learned some of this theory, if not in a formal academic setting, at least from other musicians. Even in the early days of jazz, musicians such as pianists Teddy Wilson and Mary Lou Williams were offering courses in music to a paying public, and as David Chevan, author of Musician Literacy and Jazz Musicians in the 1910s and 1920s writes, “Every early jazz musician, even those who could not read music, encountered and interacted with written music”– and, no doubt, the theory undergirding the written music.

JAZZ IS A LANGUAGE; THEORY IS THE GRAMMAR

Brent Vaartstra writes, in his Ultimate Guide to Jazz Theory: “Jazz is first and foremost a language.  Music theory is simply the grammar, sentence structure, and analysis element of understanding jazz language…Learning the theory only helps you intellectually understand it better and expand your abilities to express and formulate your own ideas.”

Based on a Facebook conversation a year or so ago, I find that our local Baltimore and DC musicians agree. Vocalist Irene Jalenti, who is adept at vocal improvisation, says, “It’s very hard to write a good book without knowing the proper grammatical structure of a language, and I think that’s the same for music.” Guitarist Jerry Bresee says, “Theory is a description of what musicians have discovered as they played or sang and gives us a way to talk to each other about music.”

Theory alone, however, won’t make a great jazz improviser. Peter Spitzer, author of Jazz Theory Handbook, says, “More important than [theory] is knowing the vocabulary–that comes from listening, with awareness, to great players, and playing as much as possible. Beyond grammar and vocabulary is the ability to communicate with listeners–to “tell a story,” and to reach an audience on an emotional, or even spiritual, level.” DC trumpeter Mary Lawrence says, “Practicing is way more important [than theory]. I learn theory best when I practice it on an instrument.” DC bassist David Jernigan agrees: “My advice would be to never study more than you practice, but you can get good ideas on what to practice from studying theory.” Bassist Mikel Combs says, “A well rounded musician is good in theory.  A musician who only practices and doesn’t study the mechanisms of music is only good, in theory.”

Above all, jazz musicians learn by listening to jazz, like Herbie Hancock, who as a young teen, taught himself jazz by listening to records, and by playing it with others.  After taking the jazz theory courses, listening to the albums, playing along with the Jamey Aebersold CDs, practicing in their basement, they just have to get out there in the jam sessions and try out their ideas while picking up ideas from other players.

And for other folks like me — jazz enthusiasts with some musical background–you might be able to follow along with the solos by bringing along to a jam session a copy of The Real Book, a compendium of charts of well-known jazz standards, showing the melody line and the chords. Even with that, you will likely not completely solve the mystery of “where are they getting the notes,” because the essence of great jazz is to use –and go beyond—the theory with inspiration and creativity.

[Liz Fixsen is an editor of the Baltimore Jazz Alliance Newsletter and has written many articles for it, and she serves on the board of the BJA. She is an inveterate jazz enthusiast and plays and sings jazz when anyone gives her the chance. Her day job is teaching adult ESL classes with Project Literacy in Howard County.]