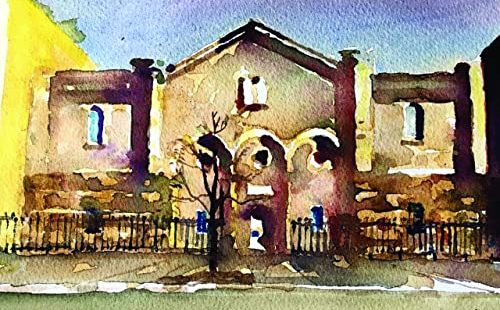 As you stroll down Madison Avenue in Baltimore, you will see old buildings that take you back to another time. One such structure, once a Jewish place of worship and today a church, compelled local jazz composer Mitch Mirkin to stop and reflect on the spirit of this holy place, past and present. Hence the title tune of his new album The Madison Avenue Shul.

From the outside, this cinder-block building—plain, gray and squat—looks quite mundane. But what we deem mundane may reveal deep secrets and transcendent magic inside. That is the duality Mirkin has tried to express musically.

Mirkin says about his inspiration for the album’s opening tune, “The Acceptance”:  “Many of us, in our lives, experience a lot of repetitive routine, day after day, month after month, year after year. But every once in a while, there is some brief excitement, a bit of hope, or promise… These highlights renew the spirit.”

Mirkin shows us a new world with this collection of seven tunes, performed by The Common Roots Jazz Ensemble. It is a glimpse into the mind of its creator, strongly influenced by his environment.  As the album opens with “The Acceptance,” keyboardist Justin Taylor sets a dramatic, introspective mood that foreshadows the material that follows.

Mirkin began composing in his teens and then resumed composing after a 25-year hiatus under the tutelage of his music teacher, guitarist Yawn Jones, at the Music Workshop. Mirkin put together a group called The Common Roots Jazz Ensemble that reflects his diverse creative vision.

As we struggle with the mundanities of everyday life, the title tune shows us the flower we almost walked right by. Ron Pender on the tenor sax gives us that OMG moment. The fluctuation between the smooth footsteps of our stroll are supported with the steady footfalls of Byung Kang on drums and Blake Meister on bass, superbly accented with flights of fantasy and dreams by Yawn Jones on the guitar.

The other songs on the album will lead the listener to various moments and memories in the composer’s life. His love of the Latin beat is strong in “Samba Reminiscence.”  He closes the album with a gentle tribute to his father in “Ruby the Seltzerman.”  The other tunes will provide a rich backdrop for your own imagination and memories to take flight.

Kwame Kenyatta-Bey has worked in journalism as a reporter and editor. He holds a degree in theater arts from Morgan State and has years of experience in theatrical production work. He is currently president and CEO of JAG Productions, which curates and produces new, contemporary and classical theatre.

This album, inspired by the old synagogue that was once home to Mishkan Israel congregation and is now occupied by a Seventh-Day Adventist congregation, reflects on “the inevitability of change, evolution, transformation,” as Mirkin puts it. The seven tunes on the album traverse cultures with various grooves and styles that often switch within a tune.

The title tune “Madison Avenue Shul” aptly invokes the history of the edifice. It opens with a mesmerizing klezmer feel, introduced by a steady, rhythmic bass line on 1, 5, and 1 and then morphs into a sweet swing groove, with the piano tinkling and dancing on high notes, and then sax joining in over the steady repeated riff. Finally the saxophone brings us back to the minor key and Jewish folk feel of the beginning.

“Canarsie Blues” takes us from Baltimore to Brooklyn, in a lively swing groove that leads to a saucy, funky solo by Taylor using a Rhodes organ setting. Again, more switching grooves from a Latin-y feel and back to swing.

“One for Wayne” opens with the guitar and flows along with that same easy Latin-y groove in a major key until the bridge, when the harmony takes on more complexity and darker flecks. Then Taylor introduces more quirks and strange turns of phrase on electric keyboard before the guitar brings back the smooth and flowing feel.

Mirkin’s favorite tune, “Don’t Keep Me in Suspense,” charms with its flowing melody and subtle harmonies, with brief but expressive solos on all instruments, particularly the saxophone.

Apart from his day job as acting director of communications for the Office of Research and Development of the U.S. Department of Veterans Affairs, Mirkin devotes himself to his love of jazz, both as a player and a composer. Overall, Mirkin’s compositions, brought to life by the impressive talents of the band, provide a satisfying listening experience.

The album was recorded at the Music Workshop in Baltimore in November 2019. It can be heard on Spotify or purchased digitally on Amazon. You can watch and hear the band perform the title tune on YouTube. The CD will be published some time in 2021. A third album is in the works.

Liz Fixsen is a jazz enthusiast, pianist, and vocalist, as well as writer and editor for the Baltimore Jazz Alliance newsletter. She also has a background in teaching writing and teaching English language learners.

← JAGGED SPACES: AN ANTIDOTE TO ZOOM CALLS
BJA in the Year of Covid-19 →