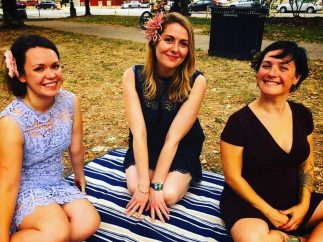 Baltimore’s Newest Harmony Trio Brings Back the Sweet and Sassy Jazz of Yesteryear.

During the 1930’s-50’s, we saw the rise of several beloved vocal groups, such as the Andrews Sisters and the Ink Spots, whose vintage sound inspires musicians to this day. This includes three artists already well-known in Baltimore: vocalist Alexis Tantau of the Hot Club of Baltimore, vocalist Bridget Cimino of the Tongue in Cheek Jazz Band, and violinist Nataly Merezhuk (Strathmore Artist in Residence). They comprise the new up-and-coming vocal trio Maids of Dishonor. They each have their own presence in the city’s gypsy jazz and trad jazz scenes and have performed on many stages including the Charm City Django Jazz Festival and Keystone Korner. Though each of them pursues her own musical projects, they regularly come together to enjoy this shared passion and keep this part of jazz culture alive.

It was Tantau who initiated the idea with Cimino and Merezhuk about starting a close-harmony group, as she had performed some of the Andrews Sisters’ repertoire in high school. Incidentally, Cimino, who had also been introduced to this style of music early on, had entertained the idea with Merezhuk around the same time. Through the happenstance of conversation, the idea was brought to fruition, and they began transcribing repertoire of the Boswell and Dinning Sisters and writing their own arrangements.

The group has already had several Baltimore-area performances in the one year they have been together as a band. Their first official gig was in September 2019, where they guest starred alongside Hot Club of Baltimore in a performance at Union Square Park. The group has also performed at An die Musik and were a part of Creative Alliance’s Sidewalk Serenades in the summer of 2020. Their performance résumé did not stop there as due to growing interest, they were sought out to perform a private sidewalk concert.

Being a part of a close-harmony group can be an incredibly challenging experience. Without the support of melodic or percussive instruments, vocalists must rely on themselves for visual cues and become more vigilant to each nuance of the music. Yet performing this style of music seems effortless for Maids of Dishonor. Each vocalist orients herself to singing specific parts of the song, with Cimino typically singing the melody, Merezhuk the high harmony and Tantau the low. Listeners will also find each vocalist’s sound to be unique. Cimino demonstrates a fierce self-confidence in her singing. Merezhuk’s voice is easily distinguishable by her clear intonation in singing the high. Tantau has a smoky quality in her voice that is well-suited for singing the bottom harmony. The result is a balanced pyramid sound reminiscent of old-fashioned WWII-era vocal groups.

As have countless of musicians, the trio has faced challenges during the 2020 pandemic. The group says “[they] have persisted pretty well” and have exuded optimism for performing once again. Early on, they quickly got together to create music virtually by recording themselves singing their own part in “Lullaby of the Leaves (1932)”, then splicing it together. Alexis states “we decided that it was just not as fun to sing apart as it is to sing together, so we began meeting at each other’s’ backyards and kept our distances so that we could actually practice together.” The group wears face masks when they practice and perform. As they have expressed, it certainly is a challenge for vocalists to sing in the company of others, as wearing masks inhibits the ability to take in full, deep breaths.

Their recording of “Lullaby of the Leaves” can be heard on YouTube. They also have recordings on their Facebook page of several songs, including “Comes Love” “Shuffling off to Buffalo,” and of “The Way You Look Tonight,” with Nataly handling “percussion” on snapping fingers and Alexis adding a whistling “instrumental.” The three bring to their repertoire an engaging quality that is both sweet and sassy, and in watching them sing, it is clear that they are having a ball doing it.

At the time of this writing, Maids of Dishonor is working with Baltimore Symphony Orchestra bassist Jonathon Jensen who is writing music for the group to perform as a three-part harmony,and there are plans to feature Jonathon on piano on future recordings. I hope that we will see them perform in-person on many stages once we enter the post-pandemic boom.

Kristoffer Belgica is a Texas native who primarily plays rhythm guitar for local gypsy jazz ensembles Hot Club of Baltimore, and the DC-based group Swing 5. He recently separated from the U.S. Air Force after seven years of service and now devotes his time learning from and contributing to the Baltimore jazz community.