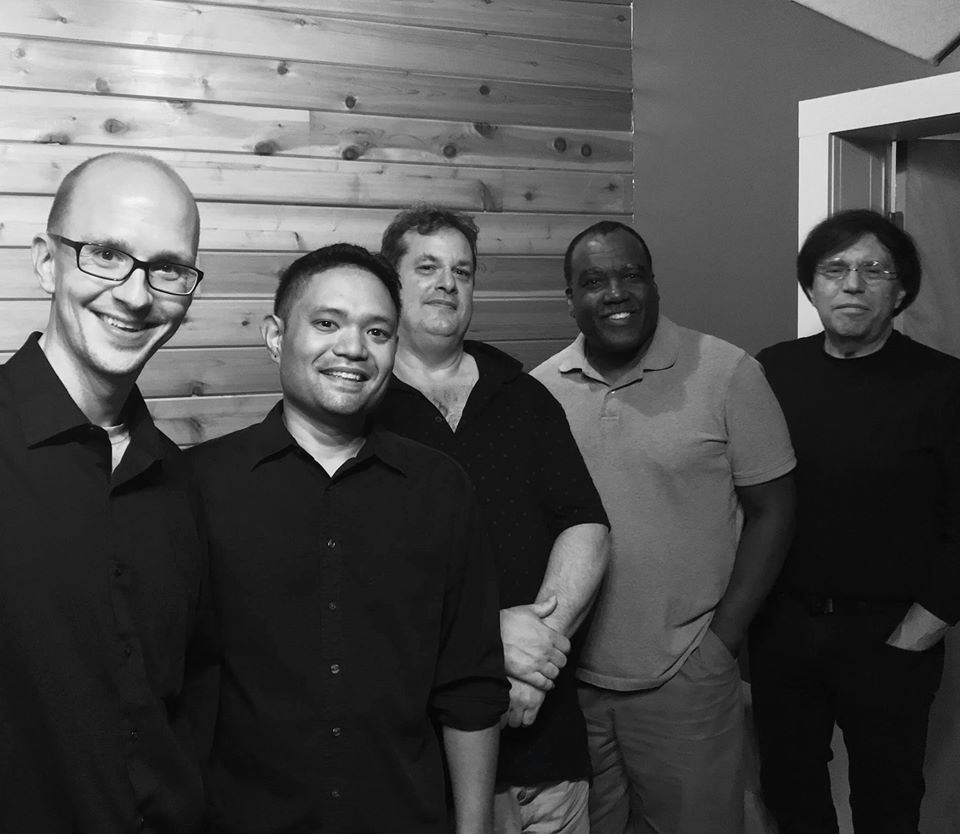 In this odd season of pandemic-induced social distancing and assorted virtual encounters– “Zoom” world– there’s a palpable longing for the familiarity of group encounters, at a restaurant, a stadium, a church or, perhaps, a favorite jazz venue. Fortunately for those with an ear for jazz, recorded music provides a stopgap, recreating the sound if not the camaraderie of a jazz concert.

A case in point is Jagged Spaces, the debut CD offering from a saucy new quintet, The Grasso-Ravita Jazz Ensemble, featuring Skip Grasso on guitar, Phil Ravita on acoustic and electric bass, Greg Small on piano, Benny Russell on soprano and tenor saxophones, and Nucleo Vega on drums. This group rewards curiosity.

The band consists of journeyman artists presently hailing from the Baltimore/Washington metro area, each with the sort of academic connections typical of today’s working musician. Taken as a whole, the CD’s nine original band-member compositions leave the distinctive stamp of straight-ahead jazz (bebop’s heir) with all of its harmonic complexity– a profusion of fast-paced notes that dance all over the musical scale– against a powerful rhythm section, with above-average soloists. The abrupt and angular approach of Russell’s volatile tenor sax style, in particular, is suggestive of the title, Jagged Spaces.

Nonetheless, the playlist is balanced with respect to tempo and mood. Consider on the one hand, “All About Cynthia,” with a bluesy rhythm section backing Russell’s lush soprano sax riffing romantically at a leisurely, even halting pace as Small’s brooding piano sprinkled single notes in response to the fluttering of Grasso’s rhythmic guitar. “All About Cynthia” revived deeply embedded personal memories of more than one amorous tete-a-tete, the sort of pre-”Zoom” conversations that served as a pretext for proximity. Remember those?

On the other hand, “Latin For Leandro” featured the guitar leading on an introductory chorus of a meandering melody with the plucky spontaneity of, say, guitar great Grant Green, to a Latin beat propelled by the cadence of Vega’s tapping drum work. The tenor sax’s response was breezy, in a middle register stream of jostling notes that set up a soaring excursion by the piano, with extended runs establishing “jagged spaces,” so to speak, against offsetting accents. In an interlude, Ravita’s rock- solid bass solo played rhythmic tag with the strumming guitar, before the sax restated the Latin-flavored theme with gusto.

This group is impressive. Going forward, I won’t repeat the mistake I made at first; confusing guitarist Skip Grasso with Washington, D.C.-based pianist Chris Grasso, frequent accompanist to jazzy diva Sharon Clark. Take note: If you’ve heard one Grasso, you definitely have not heard them all.

There’s not a bad tune in the bunch. “Songhai” features the guitar riffing with a tinge of Eastern rhythm and the tenor sax rapidly rolling repeated notes, a la John Coltrane. “Blue Sunshine” is the obligatory swaggering blues, with Russell working his tenor sax to shouting perfection. “Circles” revolves at a relaxed pace as the soprano sax zigs where the piano zags on a slinking melodic pattern that, in turn, the subtle guitar rhythmically fondles.

Also, “The Homecoming” employs an unusual timestamp, a sort of intermittently accelerated jazz/waltz, whereas “Chasing Shadows” is a soothing ballad, with a lilting theme that gradually unfolds via subdued tenor sax and guitar solos. And “Her Life Incomplete” features Ravita’s agile acoustic bass more prominently than elsewhere.

Surprisingly, Jagged Spaces is devoid of jazz standards, those hummably familiar tunes stylized by generations of jazz artists (e.g., “Just Friends” or “Impressions” or “A Night in Tunisia”) that form a traditional canon of excellence, a shorthand basis for individual comparison with the recognized giants of jazz. This absence is surprising because the CD’s artistry so clearly manifests the spirit of traditional jazz.

Then again, there’s a downside to imitation. Perhaps jazz standards were omitted in this collaborative project for reasons related to a story told by pioneering acoustic bassist Milt Hinton (1910-2000) in Hear Me Talkin’ To Ya (1955), a jazz oral history edited by Nat Shapiro and Nat Hentoff: “One night [a copying imitator] went down to hear his idol at Birdland. And this copier was real high. Well, the man he had copied all this time wasn’t up to par that night. So the copier went right up to him on the stand and said, ‘Man, you ain’t you, I’m you!'”

It’s about authenticity, real reality. The Grasso-Ravita Jazz Ensemble: who are they? Find out for yourself. Jagged Spaces CDs and downloads are available in advanced sales starting on December 7 at CD Baby, Amazon and Bandcamp. On January 15, 2021, a CD release event will be live-streamed from An Die Musik. Want to know more? Contact skip.phil@grasso-ravitajazzensemble.com.

One thought on “JAGGED SPACES: AN ANTIDOTE TO ZOOM CALLS”