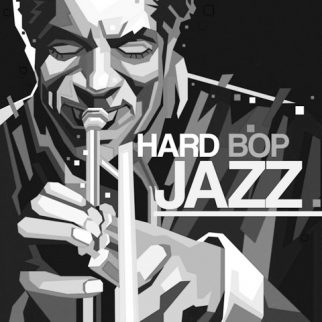 My first introduction to hard bop was through the playing of Sonny Rollins, who to this day I still consider the quintessential example of a Hard Bop musician. Whenever I listened to Rollins, I felt like I was getting to know him. This to me is the essence of hard bop—it’s about personal expression using the language of Bebop. That is why Ornette Coleman and the free jazz style developed out of hard bop.

I use hard bop as the foundation for much of my jazz playing. While I love the bebop and swing mentality that came before, and I also love the avant garde and modern approach that came afterwards, hard bop has very often been my center ground. There’s a certain kind of playfulness that stems out of hard bop that gives it great flexibility. I wouldn’t consider my playing “playful” in any way, but I appreciate the freedom given to me by the masters of the art form.

I have been told by the elders of the Baltimore music scene that back before I was born, every club in the city had a B3 organ, and Soul Jazz (an offshoot of hard bop) ruled the land. The greatest practitioner of the music that permeated Baltimore was a sax player named Mickey Fields. I never got to meet him, as I was very young when he passed away, but all of the musicians I respect in the city speak of him with reverence. When I hear recordings of his playing, I can hear him telling his story through the language of bebop. Just like with Sonny Rollins, I could get to know Fields through his playing.

At this point, hard bop has fallen out of fashion among Baltimore musicians, who find the sound dated and tend to center their playing around more modern styles. One of the notable exceptions is the pianist Bob Butta, who carries on the traditions of the great hard bop pianists like Cedar Walton and Wynton Kelly. Bob’s playing focuses on the mysterious within the familiar. His language is bop-based, which is familiar to most jazz listeners, but he can lead you down what seems like a familiar path only to surprise you when you get to the ending. Bob is an absolute joy to play music with, especially within a hard bop context. He always throws you something that is both familiar and exciting. His musical choices are easy to follow, but also push you to reach for more. That mentality in many ways is also the essence of hard bop, and I always get such a kick out of playing music in that vein.

Dan Wallace is well known in Baltimore as a saxophonist who performs in many genres of jazz as well as in funk, hip, hop, reggae. With a degree in saxophone performance from Loyola University in New Orleans, he has played with the highest level of musicians throughout Baltimore/DC and New Orleans. He also teaches saxophone and woodwinds. He periodically contributes articles to the Baltimore Jazz Alliance newsletter.

I recently read in Jazz Education Network’s newsletter that SUNY Press is looking for authors for a series of introductory books on various jazz styles. I considered sending a submission for the volume on hard bop, my favorite style of jazz. I ultimately decided to pass on the opportunity, but certain memories of my encounters with hard bop were evoked in the process.

First, some brief words on hard bop. I’m guessing you know about bebop, the modern jazz style which took hold in the mid-‘40s, was quite popular into the early ‘50s, and remains foundational to many jazz players to this day. Following soon after bebop’s heyday came cool jazz and hard bop. The latter, popular from the mid-‘50s to mid-‘60s, retained elements of bebop but was  characterized by fewer chords, simpler melodies and more blues and gospel sounds. Among its main practitioners were the bands led by Art Blakey, Horace Silver, and Cannonball Adderley. Some hard bop tunes actually became hit singles.

My first encounter with hard bop took place in 1961, when my fellow sixth grader, aspiring drummer Jerry Smith, turned me on to Herbie Hancock’s “Watermelon Man.” I already loved the mainstream jazz on the radio, but this was even hipper and funkier. A couple of years later I began taking records out of the public library. I latched on to the album Cannonball Adderley Quintet in San Francisco, borrowing it several times.  Bobby Timmons’s “This Here” was my favorite tune on the album, which Scott Yanow, in the All Music Guide to Jazz, calls “a gem…essential for any jazz collection.”

I was still in junior high when my next encounter with hard bop took place. Our 9th grade English teacher, Mr. McSweeney, in between required readings of Ivanhoe and Great Expectations, would occasionally have us do creative writing while listening to jazz records or viewing impressionist paintings. One of the jazz albums he played was Herbie Mann’s At the Village Gate, and, oh man, did I dig Ben Tucker’s “Comin’ Home Baby” (and still do to this day).

Around the same time, I first heard Lee Morgan’s bugalú tune “The Sidewinder” on a car commercial.  What?  Jazz on a nationwide TV commercial?  Amazing!

Twenty plus years later I found myself jamming with other musicians who introduced me to the music of Horace Silver. These players included pianist Wayne Landsman, from Silver’s hometown of Norwalk, Connecticut, and trumpeter Eric Heavner, who is still active on the Baltimore scene. We repeatedly played Silver’s “Senor Blues,” “Song for My Father,” “The Cape Verdean Blues” and “Nica’s Dream.” I was living my dream.