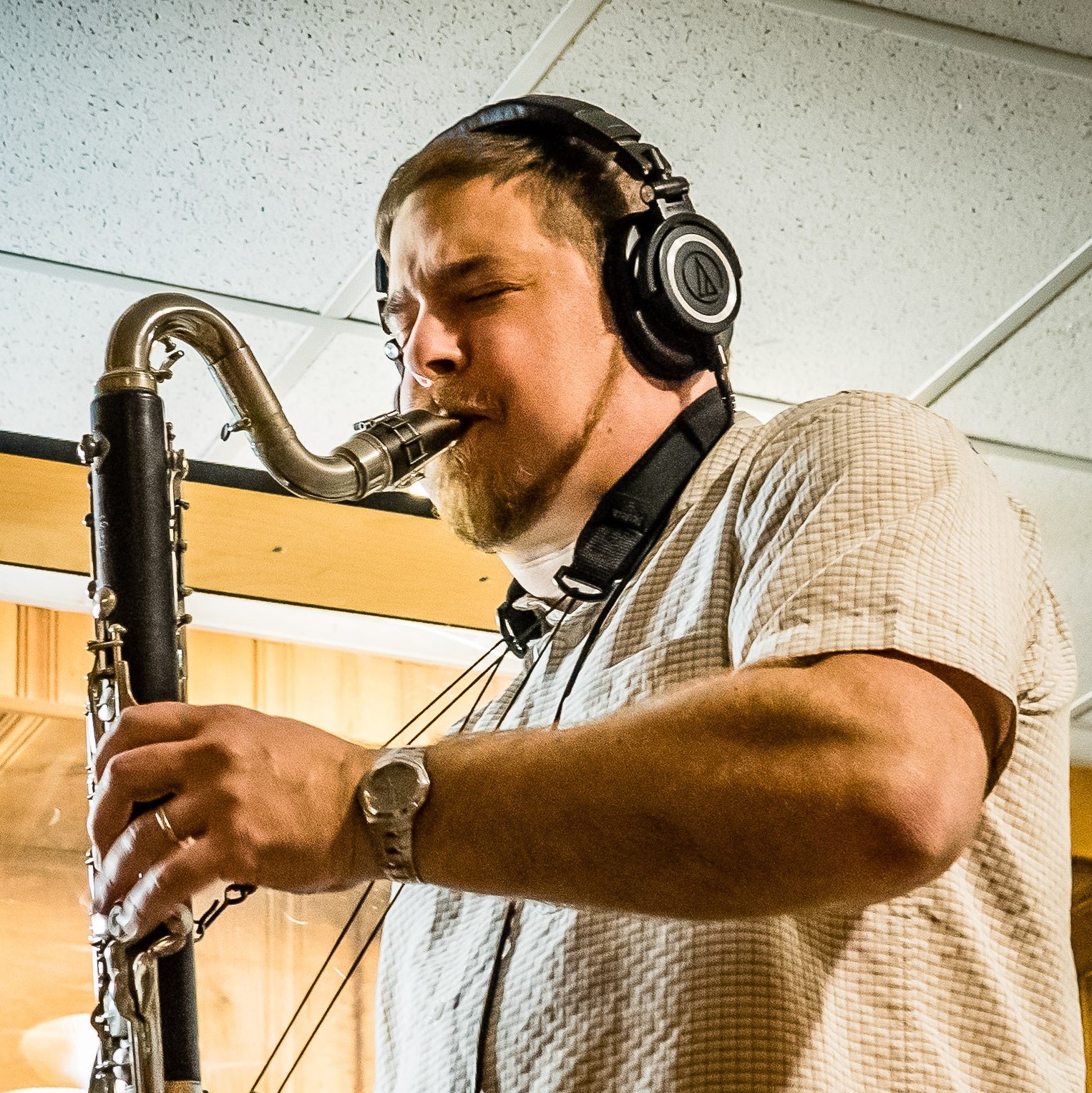 One of the great pleasures I take in being a participant in Baltimore’s jazz community is bearing witness to the endless stream of original and innovative projects produced by Baltimore’s exceptionally talented local musicians.  Baltimore, and the Maryland-DC-Virginia area, in general, continue to be a remarkably consistent fertile ground for new musical ideas, easily equal to cities like New York, Philadelphia and Chicago .

Bass clarinetist Todd Marcus is one of the most well-known jazz leaders and composers in Baltimore and is a major contributor to the new Baltimore sound that has evolved over the decades from its musical sons and daughters who were raised and educated here and performed here, as well as from a strong dose of blues, R&B, and gospel.

Before the pandemic hit in March 2020 and live venues had to close until further notice, Marcus hosted one of the longest long-running jam sessions at Home Slyce on Charles Street. The jam session ended in fall of 2019. More recently, Marcus could be seen most Tuesday nights at Keystone Korner, playing with The Baltimore Jazz Collective (which includes regulars Sean Jones and Warren Wolf), along with frequently scheduled concerts at An Die Musik and the Creative Alliance. Since March, Marcus has become one of many local jazz musicians to have turned to streaming platform concerts, including at Blue House Productions, Keystone Corner, and An Die Musik.  He also recently performed outdoors as part of  the “Creative Alliance: Sidewalk Serenades” with live audiences and social distancing.

Marcus has also gained prominence nationally and internationally as a virtuoso player and composer within the small fraternity of this obscure jazz instrument. Marcus combines music with his work as a community activist in Baltimore, evidenced by his successful leadership in non-profits  like Martha’s Place and the Jubilee Arts Center, both located within the Pennsylvania Ave corridor. His compositions always reflect his Egyptian heritage and his dedication to the improvement of his adopted city of Baltimore and his beloved Sandtown-Winchester community.

One aspect of Marcus’ projects that I appreciate – and have even emulated – is his  uncanny ability to choose the perfect band for his various projects. As a leader, he has worked with groups ranging in size from trio to nonet.  He often includes local Baltimore musicians on the same disc with nationally known musicians whom he has encountered over the years. He always aims to create an exciting cross pollination of styles and musicianship to produce the exact mood and sound he is looking for.

In his disc, Trio+ he brings together nationally acclaimed drummer and educator, Ralph Peterson; bassist Ameen Saleem from  DC and Italy, who has been included on several of Peterson’s projects and tours; along with Baltimore-based musicians–drummer Eric Kennedy and bassist Jeff Reed. Also included on four of the tracks is recent Baltimore arrival, trumpeter Sean Jones, who now heads the jazz department at Peabody Institute. Together they produce a  precise and unified sound featuring the bass clarinet in a smaller, sparer ensemble that is Marcus’ vision for this recording.

“Something Suite” is comprised of four short movements that pivot between an innovative and sometimes avant-garde approach, alternating with an effervescent and lyrical narrative. It is an interesting juxtaposition, and very typical of Marcus’ sound.  The “1st Movement” begins as an energetic, multi-rhythmic piece, reminiscent of  Sonny Rollins’ Freedom Suite, who Marcus credits as his inspiration for the piece. The “2nd Movement”  reminds me of pieces of other familiar Marcus melodies layered over a Latin tempo accompanied by beautifully weaving bass clarinet lines.  The “3rd Movement” is a slow, lilting, and romantic melody underpinned with a steady but energetic drum and bass line that keeps the tempo moving and interesting.  Finally, “Movement 4” features a rapid bass clarinet line with an urgent and muscular percussion backing – like a push from below to a burst of energy on top.  The short but delightful “Amy Pookie” –a tune for Marcus’ wife Emily, (a dedicated teacher and community activist)–begins with a slow bass clarinet fanfare and launches into a hip, percussive riff that alternates with slower horn lines that are an expansion of the original introductory fanfare, and finally ends with that playful percussive riff.

My personal favorite track on the disc is “Cantata.” It’s a beautiful, poignant waltz with a lovely intro, similar to a Spanish folk song. The waltz continues, but the melody morphs  into a tune that has another identifiable signature Marcus sound.  It even harkens back to some of his earlier work with his nonet in his 2006 album, In Pursuit of the Ninth Man. The gorgeous and lush sound of Marcus’ B-flat clarinet is a definite highlight on this track. The standard “Invitation” is also a favorite, with Sean Jones on trumpet joining Marcus. It highlights Marcus’ great skill in arranging familiar tunes with two or more alternating tempos within a piece.

Marcus’ past projects include In Pursuit of the Ninth Man (2006) with his jazz nonet, Inheritance (2012), referencing his ethnic Egyptian background and featuring two distinct quartets, Blues for Tahrir (2015), with his jazz orchestra, dedicated to the people of the Arab Spring, On These Streets – a Baltimore story (2018) is about the unrest in Baltimore and his neighborhood following the death of Freddie Gray, featuring a carefully chosen sextet.  These past works and his current disc, Trio+  illustrate that Marcus is never satisfied to stick to one comfortable and predictable formula. He is always experimental, relevant, topical, and driven to create new compositions with as many musicians as he can include in his ever-expanding musical community. He continues, almost  single-handedly, to make the bass clarinet a more well-known and a not so uncommon jazz instrument.

Marianne Matheny-Katz is an accomplished jazz vocalist well known in the Mid-Atlantic region in her 20 years of performing; two time award winner of the Billie Holiday competition and praised for her 2014 album, Somewhere in Paradise. She and her husband Howard Katz co-founded and have run the non-profit Jazzway 6004 house concert jazz series for 13 years and have presented 80+ concerts. In 2016, she retired from 30 years of service as an economist for the Federal government (Army). She is currently working on plans for recording her Joni Mitchell project.