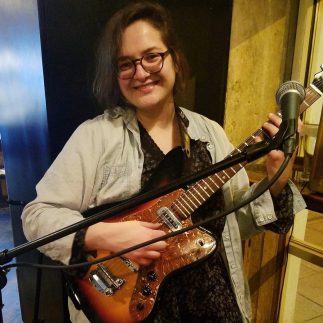 Although Christie Macdonald is very young (she turned 26 in July), she is already a fixture on the jazz scene in Baltimore.  She’s a very strong guitar player and a tasteful singer who gigs frequently and sits in on as many jam sessions as she can.

Christie plays with rock/metal bands, such as Queen Wolf, and with folk groups as well as jazz groups of many genres from “trad jazz” to straight-ahead modern to the edges of the most recent experiments in formless music.  She has played in the pit for the Everyman Theatre, Spotlighter’s Theatre, and the Vagabond Theatre, just to name a few.

But her love is the Manouche style of jazz—Gypsy jazz—with its roots in Django Reinhardt.  Her new group, Hot Club of Hamden, finds new possibilities in this decades-old genre. The group has recently done a live-stream performance at An die Musik, and although like most musicians, she has lost gigs due to the pandemic, she has played duo and solo gigs at Woodberry Kitchen and Trinacria Cafe in Baltimore and at Syriana Café in Ellicott City.

I have had the great pleasure of playing with her both at jam sessions and at a weekly gig she and I had in the bar at Germano’s (in Little Italy) before the pandemic shut us down.  The mix of keyboard—my instrument—and guitar, is not easy.  But Christie is a great listener.  She stands out as a musician by blending rather than dominating.

Other musicians agree.  For example, Ian Rashkin, a bass player who loves to bring jazz musicians together in Baltimore, said about her,  “Christie’s ability to switch between and blend old-time beauty and modern grime make her one of my favorite guitarists to listen to, and the way she can listen and react to changes of mood make playing with her a hoot!”

Recently, I had a long conversation with Christie.  Here’s part of it.

When did you discover jazz?

I fell in love with guitar when I was 9 years old, but I didn’t hear jazz until I was about 13. I didn’t like it—except the blues.  In high school I imitated singer-songwriters.  I also played in pit orchestras.  I learned that in the band I was a part of a whole, that it was the ensemble sound that mattered.

But I didn’t love working in pit bands where I had to play the exact same notes night after night.  I wanted more freedom and found it playing from the Great American Songbook with its a great variety of melodic and harmonic structures.  I could play the same song over and over and never play it in the same way twice.

I majored in guitar performance at Towson and learned a lot about different styles of jazz.  I didn’t have jazz heroes at first, but then I discovered Django Reinhardt, who became my major source of inspiration, although I still play in many different styles–especially rhythm guitar like Freddie Greene and straight-ahead jazz with roots in Wes Montgomery.

Well, I think that’s what it’s about.  Jazz is not a solo art.  It’s about playing TOGETHER in groups.   It’s about adapting to fit with other players.  Guitar is like piano mixed with drums.  It needs to lay down a steady beat and provide harmonic clarity.  That’s part of what I love about Django’s style of playing.  Strong, steady rhythm with full chords that hold the band together.

I also like to solo, of course.  I like the freedom to create my own melodies, but I always try to draw from the melodic and harmonic structure of the tune we’re playing and from the style of the other players.  Even when I solo, I try to be part of the whole.

Tell me about your teaching.

I teach people of all ages from as young as 5 to retired people.  I speak the language of guitar and have spoken it since I was a kid.  I try to teach my students to speak it, too.

And what about your charity work?

I am very distressed about how many people have lost income and cannot afford adequate food. I’ve been working with Baltimore Community Food to deliver food to people in need.  Soon they’ll open a building of their own and put in a restaurant with music.  Hopefully, I’ll be able to combine charity and music.

This article will come out in the Fall.  Any sense of where you will be playing then?

Hard to know, of course.  But a few of my favorites are Rye in Fells Point, and the 13.5% Wine Bar, and The Lou Costello room at Zissimo’s, both in the Hampden neighborhood. An Die Music is a great venue.  And there are so many more.

Great talking with you, Christie.  I’ll be watching the Jazz Alliance calendar so I can hear you play, and I look forward to playing with you again once it’s safe for an old man to go out.

(Michael B. Friedman is a retired social worker who moved to Baltimore in 2019 to be closer to his grandchildren.  He is also a semi-professional jazz piano player and photographer.)