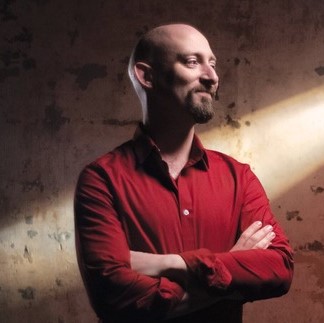 I have known the quiet, humble superstar bassist Jeff Reed since 2004 and have been fortunate enough to work with him for years on many gigs and on my recent “in progress” Joni Mitchell project.  He is one of the most in-demand, versatile, and consistently excellent bassists in the Baltimore-Washington area and is equally adept on acoustic bass and electric bass. His website clearly documents his extensive jazz resume when it states: “As a sideman, Reed frequently works with vibraphonist Warren Wolf, trumpeter Sean Jones, and bass clarinetist Todd Marcus.”  Reed has also performed with a slew of nationally and international acclaimed musicians over the years and has been recorded on over fifty full length albums.

Reed, a native Baltimorean, holds a Bachelor of Music from Towson University and a Master of Music from the University of Maryland, College Park and is currently adjunct jazz faculty at Towson University. He has taught and influenced many young bassists in the area. Until January 2020, Reed also held down one of the longest running and most coveted gigs in Baltimore: the Thursday night jazz ensemble gig at Bertha’s in Fells Point.  Before the pandemic arrived, you would see him there every Thursday night, tucked into a dark, cozy corner at the front of the tavern, often with drummer Eric Kennedy and a rotating line-up of keyboardists and guitarists.  Various influential Baltimore jazz musicians would frequently drop by to sit in. When you watch Jeff play, he makes everything look so easy, but it is obvious that years of rigorous training, listening, playing, and communication with other musicians are behind his effortless style.

Look for the Light, on Todd Marcus’s label, Stricker Street Records, is surprisingly Reed’s first disc as bandleader, given that he has appeared on so many other recordings. The nine tracks on the album include five jazz standards and four originals performed in mostly quintet format.  Obvious choices for the quintet were Eric Kennedy on drums and Todd Marcus on bass clarinet since Reed has such a long history of performing and recording with them and they share an unmistakable chemistry together.  Reed decided to add guitarist Jonathan Epley, who plays for the US Army Jazz Ambassadors, after he encountered Epley at some of Todd Marcus’s Home Slyce jam sessions. Reed played frequently with Epley at those sessions and became increasingly  impressed with his playing over time. Epley’s diverse influences in bluegrass, folk, and Appalachian styles, along with modern and progressive jazz influences, bring a welcome synthesis of musical ideas to the table.  As Reed thought more about his compositions, he decided that a trumpet would be exactly the right instrument to round out the group.  He turned to Baltimore transplant and Peabody Institute educator, trumpeter Sean Jones , who  was happy to participate in the project. Jones became  a pivotal part of this recording, especially on the title track where he and Reed carry the main melody with so much poignance.   The quintet works extremely well in presenting an unusual and interesting mix of styles but with seamlessly conveyed ideas.

The CD includes five standards, “Segment” and “Quasimodo” by Charlie Parker, “Waltz New” by Jim Hall, “A Look Inside” by Kenny Drew Jr., and “Tricotism” by Oscar Pettiford. All are executed with artful precision, respect for the composer, and with an intentional personal stamp of individuality.  It is apparent that Reed has been living with these tunes for a long time and knows exactly how he wants them to sound.  Charlie Parker’s tune, “Segment,” for example, is given the full Baltimore treatment.  Sean Jones trumpet leads with a rapid bebop entry and the other instruments join him in unison.  Tasteful stop-time solo sequences are filled by Reed in between repeats of the main theme before the ensemble launch into their quite different and individualized solos.

His four originals include “Conversion”, “Paragon”, “Look for the Light” and “Your Name Never Came up”.  “Conversion” is in 4/4 with a triplet feel, that makes it sound like a complex polyrhythmic bop piece. The band really burns this tune up. The solo section is wide open and gives the instrumentalists an opportunity for extravagant and I daresay, competitive solos that lend excitement and texture to the dynamic. Reed said that the rhythm and solo sections were influenced by his extensive listening to live recordings of Miles Davis’ group from the 1960s.

As to the title track, “Look for the Light,” Reed says the basic melody was written as he and his wife were resting on the sofa at home one evening and sharing “the most perfectly peaceful moment” he’s ever experienced. A short period of time after that moment, Reed was taking his wife to the hospital to deliver their son, and life became less quiet, more exciting, and even more meaningful.  He finished the tune eight years later, when he booked a studio a date for his recording, and then the ideas just fell effortlessly onto the paper, just like the first time he wrote the original melody. The track is a beautiful contemplative ballad that begins with Reed’s melody as a quiet and tender bass line, joined and echoed by Jones’s muted trumpet. As the other instruments join in, the tune takes on a feeling of a gorgeous fanfare, and Epley’s guitar breaks through like sunlight, with a counter tune above the fanfare. It ends with the bass, trumpet, and drum sequence from the beginning, until all drop out except for Reed finishing the tune with his quiet contemplative bass line.

“Your Name Never Came Up” is a lively bebop-meets blues-meets Latin tune that really swings with a tone set by a pulsing upfront bass.  I asked Reed about the inspiration for this tune – and it’s an interesting story from his time at Bertha’s.  Bertha’s has famous bumper stickers declaring, “Eat Bertha’s Mussels,” and Reed said that patrons are inclined to cut up this slogan to make other words and statements with the letters.

One night, Reed looked up at the ceiling and saw letters from some of these bumper stickers configured into a message that read” “Your Name Never Came Up.” He thought it would make a great title for a tune and decided it would be even more fun to use it as a contrafact (a musical work based on a prior work – often used in jazz) based on “Please Don’t Talk About Me When I’m Gone.” Over the years at Bertha’s, he tried performing the tune, changing, adjusting, and rearranging it. But he said he could never quite make it work. In the end, he dropped the contrafact idea, and the tune finally morphed into a minor blues in B minor. Reed says this tune represents his time at Bertha’s and his joy at having the freedom to play with so many musicians with “complete reckless abandon”.

Near the end of Reed’s recent CD release performance at one of Blue House Production’s streaming concerts, he read a quote from Hindu guru Sri Nisargadatta Maharaj that summed up the meaning of the title song and the CD for him:

Once you realize that the road is the goal and that you are always on the road, not to reach a goal – but to enjoy its beauty and its wisdom – life ceases to be a task and becomes natural and simple and in itself, an ecstasy.

Reed went on to say that living in a complicated time makes him fully appreciate being in the moment because it’s all we have.  He concluded with his belief that the “role of the artist is to stir up joy and to elevate people.” Reed’s highly personal and masterful CD certainly makes its listeners contemplate the beauty of moment, and it undoubtedly stirs up infinite joy.

Marianne Matheny-Katz is an accomplished jazz vocalist well known in the Mid-Atlantic region in her 20 years of performing; two time award winner of the Billie Holiday competition and praised for her 2014 album, Somewhere in Paradise. She and her husband Howard Katz co-founded and have run the non-profit Jazzway 6004 house concert jazz series for 13 years and have presented 80+ concerts. In 2016, she retired from 30 years of service as an economist for the Federal government (Army). She is currently working on plans for recording her Joni Mitchell project.