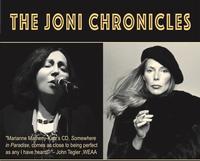 The legendary singer-songwriter Joni Mitchell, now 75, is rarely performing, but she has made an indelible impression not only on her own but also on later generations. Hers is an ever-challenging oeuvre, with her innovative excursions into and mingling of genres and her probing, elliptical, wry, poetic lyrics. And her legacy lives on not only in her recordings, biographies, and retrospectives, but also in numerous tribute performances.

Here in Baltimore, Marianne Matheny-Katz, one of our finest vocalists, has paid an extraordinary tribute to Mitchell, with her “Joni Chronicles” concert, which was first performed in October of 2011 at her elegant house venue, Jazzway 6004.  However, she didn’t just reproduce Mitchell’s songs; she and her band created intriguing new arrangements and treatments. Over the years, the same band has continued to evolve the arrangements. And now, on Friday February 7th, Matheny-Katz bring this work to Baltimore again in a concert at Germano’s Cabaret in Little Italy, with nearly the same band as in 2011: Craig Alston (saxophone/woodwind), Alan Blackman (piano), Eric Kennedy (drums), Michael Raitzyk (guitar), and Mike Pope (bass).  To learn more, visit Matheny-Katz’s Facebook website page (https://www.m2kjazz.com/) or the website of Germano’s Piattini. A fine article on Mitchell’s life and work is found on the NPR website, https://www.npr.org/2018/11/09/666148055/joni-mitchell-at-75-trouble-is-still-her-muse. Germano’s is located at 300 S. High Street, Baltimore. PH. #410-752-4515. Tickets are $20 on InstantSeats.  Here is a link to the article by Liz Fixsen on the October 2011 concert, from the Dec. 2011 issue of the Baltimore Jazz Alliance newsletter.