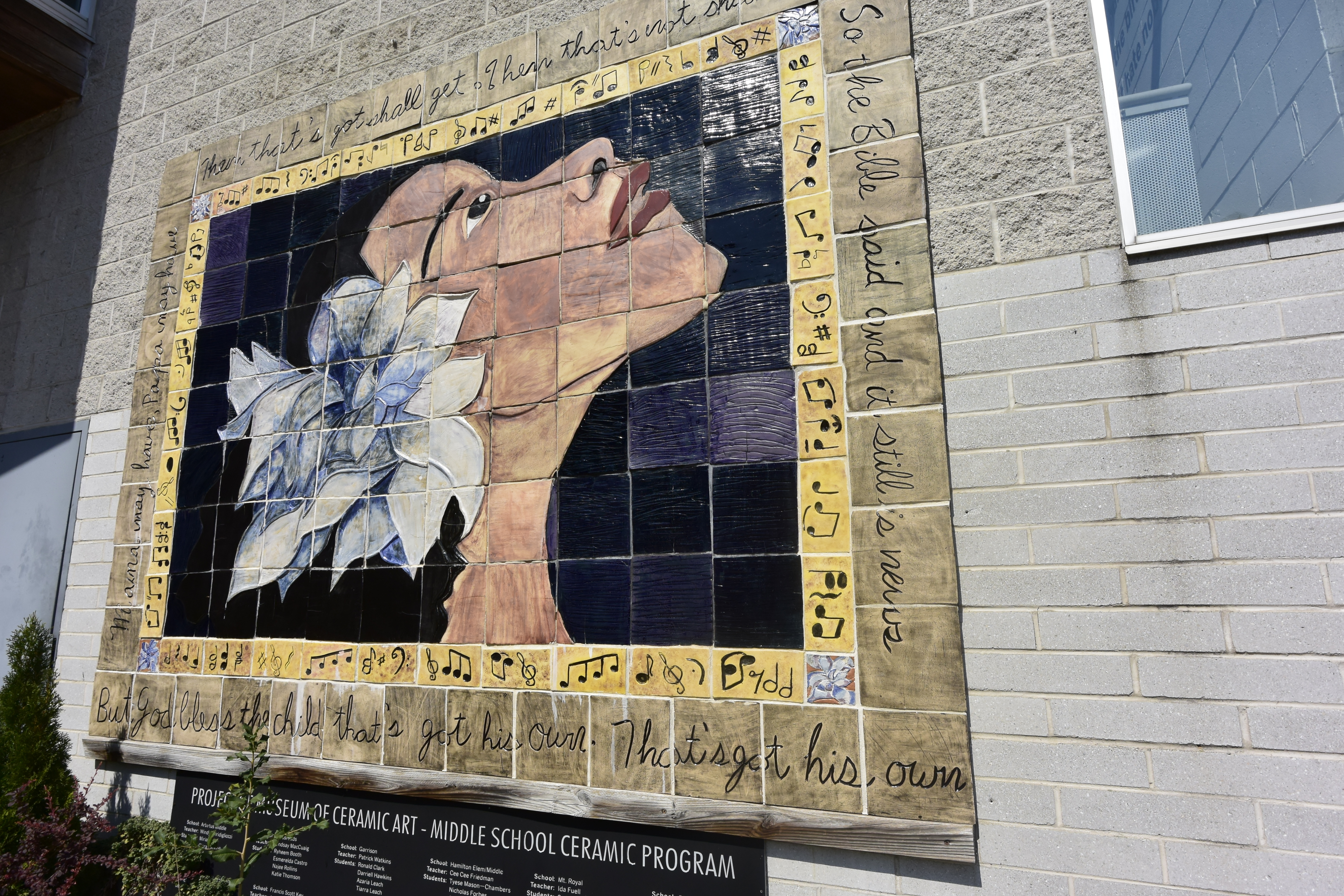 In part 1 and part 2 of this series we presented jazz-themed art in and around the Pennsylvania Avenue Black Arts & Entertainment District and Billie Holiday-themed art in Upper Fells Point. Here are more pieces of jazz-themed art from other locations around Baltimore City.

At the rear of Eubie Blake Cultural Center & National Jazz Institute, 847 N. Howard St., is this ceramic mural of Billie Holiday (shown above, photo by Roland Dorsey), including lyrics from “God Bless the Child.” The artist is not named but twelve Baltimore City and Baltimore County middle schools whose students worked on the mural are listed.

Under the Route 83 overpass near Saratoga Street and Fallsway, are pillars bearing murals of Betty Carter and Charlie Parker. Both were painted by Pontella Mason, whose two west-side murals were featured in part 1 of this series.

At the corner of Duncan and McElderry Streets, a few blocks east of Johns Hopkins Hospital, across from the municipal Northeast Market, is a faded mural of Billie Holiday, Eubie Blake and Chick Webb performing a mythical club date. Unfortunately, no artist’s name appears on the piece.

On the side of 401 E. Lafayette St., in the Greenmount West neighborhood, Is Ernest Shaw, Jr.’s 2014 mural, Holy Trinity. Flanked by Malcolm X and James Baldwin is pianist/vocalist Nina Simone, who Shaw also painted on Pennsylvania Avenue.

The latest addition to Baltimore’s jazz-themed art appears on Anthem House, the new apartment building at Key Highway and Fort Avenue in South Balitmore. The mural, Anthem, actually includes Francis Scott Key and Edgar Allan Poe. Shown here in front of the Billie Holiday section are artist Jeff Huntington, a.k.a. Jahru, and developer Toby Bozzuto. Huntington, whose work appears in 7 countries, co-founded Future History Now, which involves youth in public art projects. If you go to see this mural, we encourage you to also check out Huntington’s Billie Holiday mural in the building’s lobby.

Well, that’s it for now, until the next jazz-themed public art appears in  Baltimore.