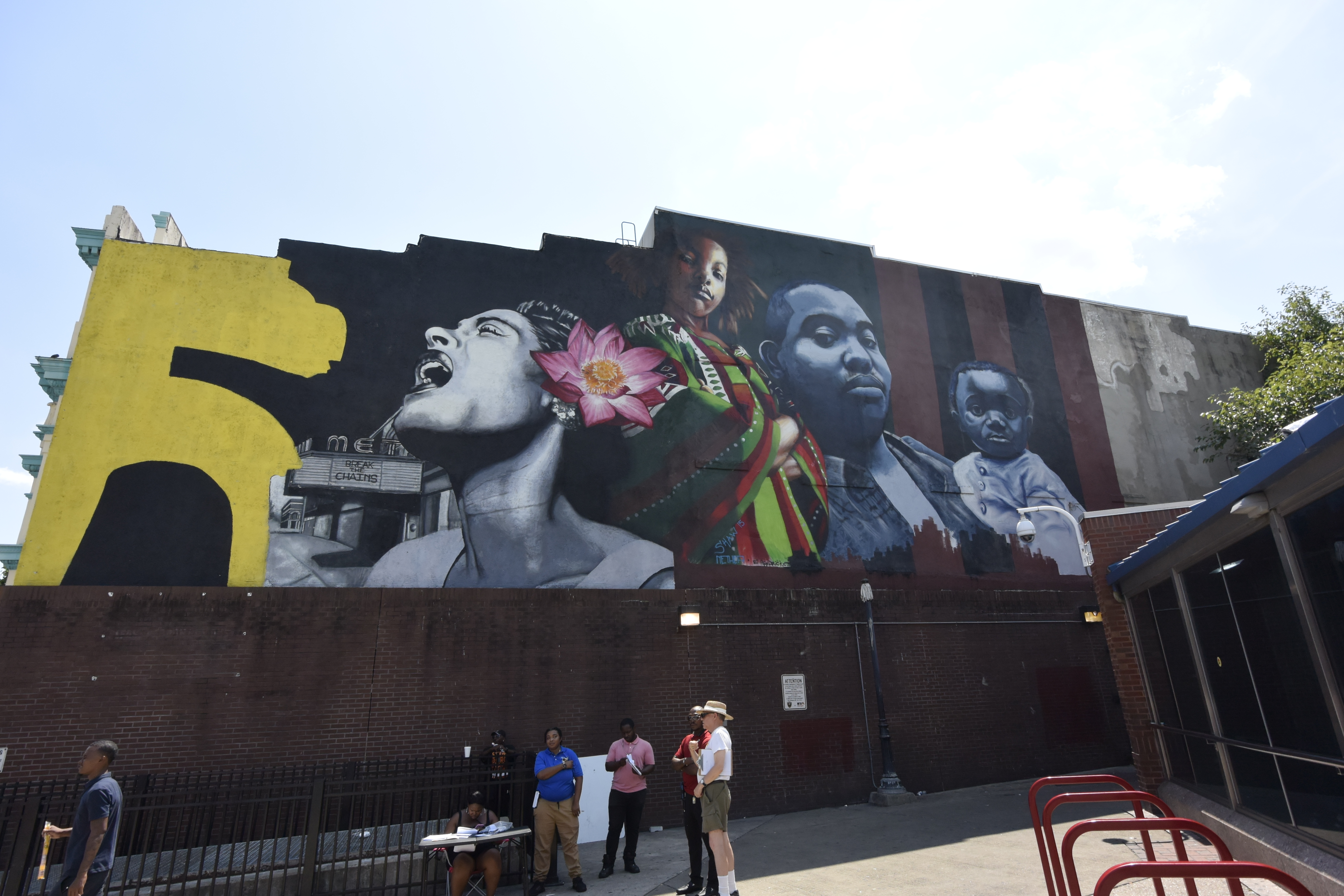 Baltimore City has hundreds of murals, with local and world renowned jazz figures appearing in dozens of them. As you will see in this three-part series, jazz is also represented in other forms of the city’s public art.

One of the two major clusters of jazz-themed public art is the newly-designated Pennsylvania Avenue Black Arts and Entertainment District. Our tour begins on the side of the historic Arch Social Club, 2426 Pennsylvania Avenue (at North Avenue). The mural with Billie Holiday on the left (shown above, photo by Roland Dorsey) is Sankofa, completed in 2015 by artist Ernest Shaw, Jr., with assistance from Eric Hendricks III and Nether, sponsored by Baltimore Office of Promotion & the Arts (BOPA) and Jubilee Arts. Shaw, from a West Baltimore family of artists and musicians, was educated at Morgan State University and Howard University. He teaches in the Baltimore City public schools and at Coppin State University (more on other Shaw murals later on).

The Avenue Bakery is located at 2229 Pennsylvania Avenue. Owner Jim Hamlin, a major jazz fan and presenter who is very active in community development, has integrated 8 large displays on the area’s civil rights, political and cultural history into the bakery’s property. The courtyard/garden area includes a photo montage and text on Billie Holiday, assembled by graphic artist and jazz historian Stuart Hudgins, and a mural of the Royal Theatre’s jazz, R&B, and comedy stars, including Billie Holiday and Cab Calloway, bracketed by Louis Armstrong and Miles Davis. The mural is by Cisco the Artist, aka Cisco M. Davis, a Jessup-based artist educated at Newark (N.J.) High School for the Arts, Anne Arundel Community College, and Howard University.

The Upton subway station, on the 1700 block of Pennsylvania Avenue, boasts a 46’ by 14’ Venetian glass mosaic mural of a jazz band with Billie Holiday. The work was created by world-renowned artist Romare Bearden and installed 37 years ago by Crovatto Mosaics. Across the street is a black and white mural completed in 2005 by artists Kirk Jackson and L. Lewis. While many of the images depict civil rights and political leaders, the mural includes Cyrus Chestnut, Gary Bartz, Cab Calloway, Chick Webb and Ella Fitzgerald. Next door is a series of color portraits, with Ernest Shaw’s painting of Nina Simone in the upper right.

Around the corner, at 1611 N. Baker Street (at Carey Street) is the Baltimore Wall of Pride, a 27 ‘ by 17’ work by the late dean of Baltimore mural painters, Pontella Mason, who completed the work in 1990 along with apprentice Deborah Brooks Mason. It is located alongside the Elwood Brown Memorial Playfield. Near the center of the mural are Charlie Parker, Billie Holiday, and John Coltrane. Thankfully, the weathered mural will be restored in 2020. Pontella Mason was born in Rocky Mount, N.C. (birthplace of Thelonious Monk) in 1948. Mason was educated at Baltimore City College High School, New York City School of Visual Arts and Maryland Institute College of Art.

Another Pontella Mason mural, which, like Baltimore Wall of Pride, traces black history from ancient to contemporary times, is nearby at 903 N. Stricker Street (at Lafayette Street). Entitled Reawakening, it was completed in 1994 with assistance from Deborah Mason and Gail Evans. Pictured in the lower right are Duke Ellington, Ella Fitzgerald, and The Ink Spots.

At the northwest corner of Pennsylvania Avenue and Lafayette Street is James Earl Reid’s larger than life statue of Billie Holiday, commissioned in 1979. Reid is a MICA graduate who studied under Joseph Sheppard and has taught at University of Maryland College Park for 11 years.

Diagonally across the street on the southeast corner of Pennsylvania Avenue and Lafayette Street, former site of the Royal Theatre, is a multi-media celebration of the great entertainment presented there. Unfortunately, small paintings in the pavement of jazz figures Billie Holiday, Eubie Blake, Duke Ellington, and Cab Calloway have not held up well under feet and the elements. Another unfortunate aspect of the art at the site is that none of the artists are acknowledged.

Our next article on jazz in Baltimore’s public art will cover the murals and painted screens on the 200 block of S. Durham St. in Upper Fells Point, where Billie Holiday lived in her formative years.