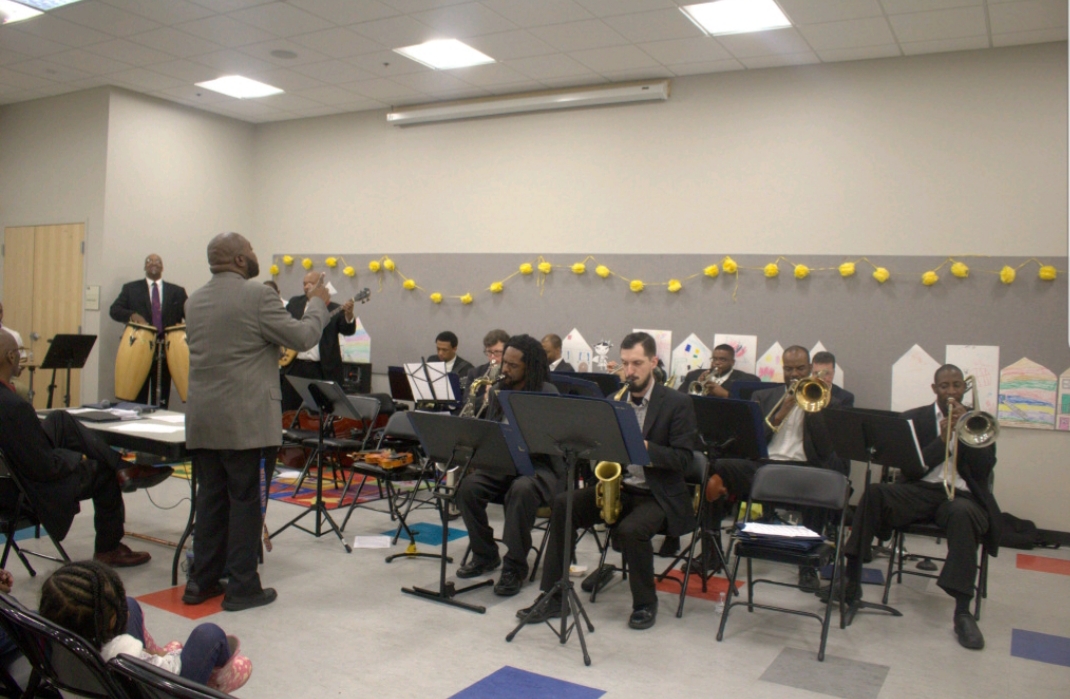 The performance by the New World Outreach Jazz Orchestra (NWOJO) for their annual harvest concert at the Waverly branch of the Pratt Library marked the first time I’d witnessed them live. To sum up their performance in one word—”dynamic.” From the beginning NWOJO’s presentation was different from the typical big band show, with only the four-piece rhythm section of drums, congas, keyboards and bass playing. Co-leader/trumpeter Ronald Rolling then introduced each rhythm player as he soloed, then each horn player—four other trumpets, four trombones and two saxes—entered the room when he was introduced. Co-leader Terrance Gallop then rose from his seat at a long table to get the audience clapping to “Groove Merchant” and encouraged them to applaud after each solo. The band continued with a couple of big band staples, “Bye Bye Blackbird” and “Cute.”

Guest vocalist Henrielle Smith joined the band for perhaps the most humorous Christmas tune, “Santa Baby.” On the next number she teamed up with percussionist Mason Guthrie for “Baby, It’s Cold Outside.” Then, as Gallop noted, the program moved from low temperatures to the warmth of “Spain.” Among the tune’s nine soloists was Centennial High School trombonist N. Green, who was clearly new to improvising, but spurred on by the enthusiastic crowd. The band then returned to the traditional big band repertoire for “Take the A Train,” with trumpeter Kennis Rolle replicating Ray Nance’s famous solo.

Next the rhythm section launched into the funky rhythm introduction to George Benson’s “On Broadway, “ but surprised everyone with “Do You Hear What I Hear?,” masterfully sung by Mason Guthrie. Sixteen-year-old guest keyboardist Jeheiel Smith, who attends Baltimore School for the Arts, turned in an inspired performance. NWOJO’s last set included Roy Hargrove’s “Strasbourg St. Denis,” “My One and Only Love,” “A Night in Tunisia” (smoking!) and finally, Earth, Wind and Fire’s “Fantasy.”

You’ll notice that NWOJO’s middle name is “Outreach.” Many of the band’s performances are held in Baltimore City libraries. If this show was any indication, they are fulfilling their outreach mission very well. The library meeting room was packed with sixty racially diverse people of all ages, including nine children.

Finally, I must give a shout-out to fellow saxophonists Tim Andrulonis (alto) and Shaun McIntyre (tenor) who managed to approximate the sound of a section that is usually five saxes strong.