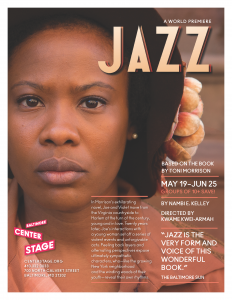 If you’re noticing signs and posters advertising Jazz at Center Stage, you might be wondering how this new play — based on the book by Toni Morrison — related to you as a music lover. BJA Board member Rená Sweetwine and I did, so we attended the opening night performance, and had a great time.

Of course, the story is not about jazz, per se, but it is infused with it in a number of ways: its timeline is more or less contemporaneous with the development of early jazz, and many of the characters are enamored with this new, liberating music. Others not so much — the beginning of the story, the murder of a young girl, Dorcas, is attributed to “that jazz… that dirty, get-on-down music… danced to, close and shameless or apart and wild.” And the development of the story mirrors the way a jazz tune is often developed: a few basic themes are established up front in the “head”, with different interpretations, memories, and feelings developing over time to present a fuller, more complicated picture.

And of course, there’s the music — besides some great incidental music, the show features local jazz trombonist Greg Boyer wandering around the stage playing along with various scenes. There are even a couple of times when characters break out in song, and the funeral lament/spiritual (in 5/4 time!) intoned by the full cast was a nice touch.

This play is definitely not a musical; nor is it “about” jazz in the immediate sense. But it’s a great story and a very well done performance; with a taste of jazz infusing it, there’s every reason to go enjoy this show!

If you have not visited the Baltimore Center Stage yet you will be in for a treat once you do. I find myself wanting to share an observation or two about the newly renovated theater while I enjoyed the play Jazz. In particular, on the fourth floor by the beverage area, there is a floor-to- ceiling computerized scroll on which Marylanders shared their personal short stories. While you’re waiting in line for your beverage, you’re being entertained. You may see a person’s picture with their story, and it maybe someone you know. It was quite interesting.

The technology that was fused with the play was remarkable. Some of the intricate scenes would have been truly challenging for any theater to stage, had it not been for the technology to make it possible. Aside from the play being a love story, it touched on other topics that some still ring true to this day, such as the violence prevalent in inner cities, and the lack of trust in the Afro-American community for the police to do the right thing.

The play Jazz and the Harlem Renaissance had a few traits in common: they both were provocative, seductive, and even dangerous.

BJA President Ian Rashkin and I met a couple of cast members once the play was over, and they were professional yet down to earth. They did not shy away from the audience members. They appeared to welcome us theater goers. Jazz is not a slow-paced play whatsoever. Full concentration is needed especially, in the beginning to keep up with the next dramatic scene. I would recommend this play.