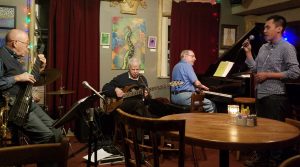 —By Liz Fixsen
Surely many a jazz singer first coming to a jam session has experienced something like this exchange: “Can I sign up to sing a couple of songs?” “We don’t have a microphone.” “I brought my own.” “We don’t have an extra amplifier jack.” “I brought an amp.” “We don’t play in non-standard keys.” “I brought charts.” “We don’t use charts.” There are some jams that might as well just post a sign, “No Singers Allowed.” Others are fairly welcoming, although it’s clear that the band would far rather be jamming on “Witch Hunt” or “Isotope” than on “Pennies from Heaven,” and eyeballs roll if you step up to the mic and start crooning, “My Funny Valentine” or, God forbid, “Summertime.”

But 30 miles from downtown Baltimore, in the heart of historic Annapolis, you’ll find Starr’s Jazz Jam. Here, they don’t just tolerate singers—they welcome them, every first and third Wednesday of the month, from 7 to 10 pm. I’ve been participating in the jam for the last year or so, and I’ve heard singing that ranges from decent to dynamite. I’ve never heard a singer so terrible that you just couldn’t listen. I’ve heard professional quality singers; I’ve heard young singers who haven’t quite hit their stride and older singers who are past their prime. But every one of them has brought his or her own unique voice and personality to the familiar standards. Some fine instrumentalists also regularly join in.

This band loves playing together, which they’ve been doing at 49 West Coffee and Wine Bar for almost ten years. Their repertoire of jazz standards is vast, and they can handle the tunes in just about any key—and if they can’t, they’re happy to use your charts. This band’s mission is to make a singer sound good. They make it easy to hear where to start and where to come back in after solos. If you should come in at the wrong place, they’ll jump right to wherever you are. The audience is equally welcoming and tolerant. If you forget the lyrics (as I’ve done on occasion there), no big deal—a few lines of mumbling or scatting are readily forgiven. Newcomers should check in with the elegantly dressed and ever-gracious hostess Pat White, sitting at the back table. The band plays for the first set, then in the second and third sets, every singer is invited to sing two songs.

Joe Byrd, brother of the famous jazz guitarist Charlie Byrd, and Joe’s wife Elana started the jam in 2005. After Joe retired at the end of 2008, he passed it on to bassist John Starr. Starr earned a music degree from Washington College in Chestertown, MD and has played in some of the region’s best bands playing for weddings and other functions, such as Ray and the Mystics, where he was lead guitar. As a teacher of bass, he has seen some of his pupils go on to top schools such as Berklee School of Music. Besides the bass, Starr plays flute and electronic wind instrument (EWI)—and he also sings, with a lot of pizzazz and a great sense of humor. His sassy and audacious rendition one night of “Making Whoopee” brought the house down.

In fact, the band has two bass players (both on electric)—a rare feature in any jazz combo. The other bass man is Dick Glass, who also plays flugelhorn. When Starr sings or solos on EWI, Glass plays bass, and when Glass plays flugelhorn, Starr plays bass. Glass also does a pretty mean scat when soloing on bass. He too studied at Berklee School of Music (1968) and went on to play in the US Naval Academy band from 1972 to 1977—not only bass, but also trumpet, guitar, keyboard, vocals; he also created arrangements. From 1977 to 1995 he held the post of Senior Chief Musician in the US Navy Band.

The band is rounded out by Tom Korth, former chair of music at Howard University, who brings a terrific sense of groove on the piano, and the always tasteful drummer Bill McHenry, who started drums at age fourteen and went on to play with the U.S. Army Band out of Augusta, Georgia. Since landing in Annapolis in 1984, he has played mostly Dixieland jazz throughout the area.

The jam happens in the cozy back room of the 49 West Coffeehouse and Wine Bar, at 49 West Street, Annapolis. Parking is available in the small adjacent lot, at nearby Gott’s Garage, or on the street. Cover charge is $10. The welcoming camaraderie at Starr’s Jazz Jam should make it a top destination for every aspiring jazz vocalist.