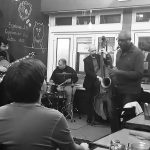 —by Bob Jacobson
Two years ago in February, clarinetist/bandleader Todd Marcus brought his many years of experience with jam sessions to a new venue, HOMEslyce, at 336 N. Charles Street in downtown Baltimore’s Mt. Vernon neighborhood. Marcus had previously led jam sessions across the street at Copra and at Tyson’s, near Fells Point. I can also remember him playing at jam sessions led by saxophonist Al Maniscalco at Louie’s Bookstore, just two blocks up N. Charles Street, in 2000.

The HOMEslyce jam takes place every Wednesday, from 8 to 11 p.m. The house band consists of Marcus on bass clarinet, plus a rhythm section of piano, bass and drums. The session attracts players across a wide range of ages, experience, and instruments. Many of the regulars praise Marcus’s leadership. “It’s a very inclusive atmosphere. There can be a thousand tons of talent up there and someone with less experience is welcome. Todd treats everyone with decency and respect,” says pianist Greg Small, who received his master’s degree in jazz performance from the University of Maryland at College Park in 2008. Guitarist Jonathan Epley, who plays in the Army’s Jazz Ambassadors, concurs. “There’s no pressure, just a really good time, which fosters the kind of atmosphere where twelve- and thirteen-year-old kids can come out.” (Epley is referring to sibling saxophonists Ebban and Ephraim Dorsey, who jam here almost every week.) Trombonist and Peabody Conservatory graduate Christian Hizon characterizes this jam session as “very familial.” Hizon adds, “Other jams can be a wall of sound, where you’re just a cog in the wheel. Here you can feel confident. It’s a great place to show your stuff.” Electric bass player Alex Meadow, who moved here from New York City one-and-a-half years ago, has a different slant on the HOMEslyce jam. “This jam has been essential for me. Almost every single gig I’ve had has happened because of the people I’ve met here. This is the big one.” HOMEslyce is where he first encountered bassist Jeff Reed, with whom he quickly took some lessons and through whom Meadow met other useful contacts.

As is typical of jam sessions, the house band plays the first set on its own. Marcus happened to be on vacation the night I attended, leaving the session in the capable hands of DC-based tenor saxophone master Paul Carr, with seasoned veterans Jesse Moody on drums, Alex Weber on bass and Savino Palumbo on piano. Carr took them through a high-powered set of jazz standards: “Bittersweet,” “Autumn Leaves,” “I’ll Remember April,” “Whisper Not” and “The Eternal Triangle.” After a well-deserved break, Carr began calling up the musicians who had signed in to jam in twos and threes. That night’s cast of jammers included two saxophonists, one trombonist, one trumpeter, three guitarists, two bass players, two pianists and one drummer. Band size never exceeded six, except on the last tune of the night, played by ten musicians. In the past I have seen jammers bring written music, but there was none in sight on this particular night.

HOMEslyce’s menu is focused on a wide variety of pizza options, along with a small selection of other dishes. The restaurant also features a full-service bar, with many choices of beer, including local ones.

Congratulations to both HOMEslyce and Todd Marcus on the second anniversary of this jam session. May it continue for many years!